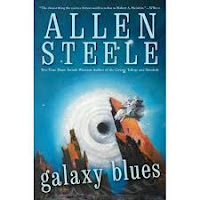 A spin-off novel from Steele’s Coyote trilogy, Galaxy Blues is the story of Jules Truffaut. Illegal stowaway aboard the Robert E. Lee, Truffaut gets to Coyote the hard way. Imprisoned upon arrival at the colonial planet, Truffaut is set free under the condition he serve aboard the cargo transport ship of the millionaire Morgan Goldstein, an irksome man who is trying to corner the newly opened market with the alien hjadd. Things immediately smelling fishy after lift off, Truffaut discovers not all of the crew members are as they seem, including the lovely Rain Thompson, and the mission to deliver cargo may have ulterior motives.

I enjoyed the original Coyote trilogy for its stark simplicity, and through this, its ability to touch upon, in reasonably intelligent fashion, many of the major socio-political concerns of colonization, some of which could even be tied back into concerns on present day Earth. Galaxy Blues possesses none of this relative depth. Straight-forward young man’s adventure, Steele maintains the stark simplicity, but does not balance his story or setting against anything with more substance. Given the aim was rero YA, this is all well and good, but, like the other Coyote spin off Spindrift, does cleave further from the heart of the original trilogy.

And for this, I must say, the book’s title is very poorly chosen. Looked at in a vacuum, the tale which follows doesn’t hold suit. There is simply nothing ‘blue’ about the novel or mood. A Heinlein-ian title would have been significantly more appropriate.

While Jules and the Hjadd or Stowaway! may go a bit too far, there certainly is a retro innocence about the novel that Steele occasionally deconstructs. Nudity is dealt with, but in such a prudish fashion one wonders what the need to include such content was to begin with. (Naked girl, hee hee.) Marijuana likewise plays a role, and along with feeling like one of the most forced elements of an sf story ever, likewise is not handled in the most mature fashion. Suffice to say the novel’s conservatism will speak to people looking for throwback Silver Age sf as much as it will turn off readers looking for something that does not take their intelligence with a grain of salt.

From what I’ve read so far, the original Coyote novels are the main reasons to dig into the series. Not the most sophisticated science fiction series ever written, Steele nevertheless creates a scenario which highlights major human inter-relational issues. Bad title and all, Galaxy Blues is, however, spurious to the main series, and should be of interest only to people who want to delve into young men’s adventure fiction from the 50s.
Posted by Jesse at 5:45 PM