Console Corner: Review of The Deadly Tower of Monsters

A couple of years ago I watched the film Jupiter Ascending with jaw dropped. The special effects, as with most big-budget sf films this generation, were spectacular. But that was certainly not the reason. I was agape at how stereotypical, how blatantly cheesy, how utterly cheap the film was. Damsel in distress, galactic takeover scheme, Cinderella heroine, overpowered hero, terrible one-liners—it was as if the past fifty years of films and books deconstructing precisely that type of narrative never existed. This leads, interestingly, to ACE Team’s 2016 The Deadly Tower of Monsters—but not for the same reasons.
A throwback to 50s b-movie science fiction, The Deadly Tower of Monsters is a game that intentionally presents an extremely stereotypical experience. Maximizing fun through parody, gameplay is framed as a b-movie and overlain with ‘director’s commentary’ that converts the colorful, puzzle platforming/action one expects of ray guns and aliens into a very humorous experience.

The Deadly Tower of Monsters tells of intrepid spacefarer Dick Starspeed (great name) after he crash lands on a strange planet. Navigating a village of apes and dinosaurs, he meets up with Scarlett Nova, rebellious daughter to the planet’s evil emperor, and is subsequently kidnapped by a giant gorilla—one of the emperor’s twisted pets. Scarlett rescues Starspeed, and together the two find the deadly tower. Monsters and aliens attacking from all sides, the two climb their way higher and higher into its reaches to defeat the evil emperor and his minions.

If that story premise sounds poorly motivated, it is intentionally so. As stated, gameplay is framed as a sci-fi b-movie, which by default rarely has water-tight plotting. Another way of looking at this is, don’t worry about the story making sense as the experience is about something else (namely making fun of shitty films like Jupiter Ascending). This lends itself to: ‘What then is the point of playing?’

A mix of puzzle platforming and action, players control one of three characters (interchangeable between Starspeed, Nova, and later a robot) in navigating various obstacles and monster fights. The game is played in third-person isometric view that occasionally switches to top-down as players climb higher in the tower and need to shoot monsters attacking from lower levels. Colors popping off the screen, navigating the funky-tech tower and cheesy monsters is visually satisfying. I wish developers had given players control of the camera rather than forcing the isometric view upon them, nevertheless, the laser guns, neon alligator people, teleporters, etc. all have a rich, dynamic palette that attracts the eye and is great fun to roll, blast, jump, and fight through.

In combat, players have use of ranged and melee weapons, more and more of which are found as the game progresses. (Some are great fun, like the atomic frog gun, black hole gun, and laser whip.) Each of the three characters likewise have their own special abilities that are needed to get through various puzzles or reveal special items. There are also cogs that can be collected to upgrade weapons. And lastly, and perhaps most interestingly as I have not seen it in a game before, unlocking trophies allows the player to upgrade their character. Listed at terminals found throughout the game’s levels, players can see what tasks need to be completed per trophy, and upon earning one can in turn upgrade HP, health regeneration, weapon recharge, etc. I usually pay no attention to trophies, but in Deadly Tower it was necessary to build your character, which made for an interesting dynamic on gameplay. 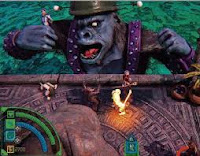 If there are any other downsides to Deadly Tower (besides the shitty isometric camera angle often blocking player view), one is that the game really only warrants one play through. By embedding the trophy system in gameplay, most players will have achieved a lot of the game’s goals before completion. (For the record, after defeating the ‘final boss’ and watching the cut scene, the game returns the player to the prior level, allowing them to seek out any trophies they may still be interested in.) And there is no adjustable difficulty—no M.E.G.A.-hard mode to entice players who want a more challenging test of their Deadly Tower skills. Another is that there doesn’t seem to be any reason to utilize all the player’s weapon stock. More preference or style, players can use the weapon they think is coolest, and push on accordingly.

In the end, The Deadly Tower of Monsters takes the piss out of sci-fi films of old, everything from Planet of the Apes to It Came from Outer Space, and does so in pretty much the only way you can these days and still be taken seriously: parody. No Jupiter Ascending, the game is aware of its cheese and attempts to make the most of it. Fun and colorful, its art style hearkens back to the Golden Age but has a layer of director commentary (with many lol bits) that let the player know the game is something old yet something new. Thus be warned that like all mediums which depend on humor, Deadly Tower likewise depends on the appropriate audience. Overall gameplay is simplistic platforming/action, but contains enough variety and options to give players something more than a basic Atari or Nintendo experience. And if nothing else, it can be great fun using ray blasters, laser swords, and other such retro toys in action against wild aliens and monsters. Not overstaying its welcome, the game offers roughly five hours of gameplay, which in terms of bang for buck, was more fun than games like Bioshock, Uncharted, or others. If you like games like Headlander, The Swapper, etc. and other indie/small games that work in the science fiction medium in retro fashion, try Deadly Tower of Monsters. It goes without saying Mystery Science Theater 3000 fans will eat it up…