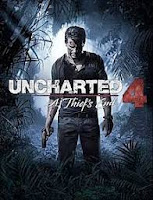 Like most Hollywood films, I have a love/hate relationship with Naughty Dog’s Uncharted games. They look spectacular, but don’t hang around in memory long after playing. The admission price seems justified by the fireworks, but become immemorable once the credits roll. Given how juvenile the storylines and premises are, it’s not a surprise. Like brain candy, however, I have played each of the three Uncharted titles to date, and given the praise surrounding Uncharted 4: A Thief’s End, I unwrapped its cellophane as well, leading to the question: can it shake its Hollywood façade to offer a deeper experience?

Like many a big screen action flick, Uncharted 4 starts off in media res. Drake and his brother Sam are in a boat, piloting through stormy ocean waters at night while a group of boats give chase. The action intense, gunfire lances across the waves, forcing Drake and Sam to defend themselves as they talk about making it to the mainland. As all hell breaks loose, the scene cuts back in time to Drake as a boy in an orphanage. A young delinquent, Drake escapes the orphanage to meet Sam for a night of joyriding. Cutting to yet a third scene (Drake and Sam in a Panama jail as adults, plotting their next big treasure haul) the game slowly connects the dots, making for what appears one last action/adventure for Drake.

Where in previous Uncharted games the line between action scene and cut scene was well defined, Uncharted 4 blends the two to a far finer degree. There is still everything Uncharted players expect, the puzzle platforming, the logic puzzles, the shoot outs, the quick-time events, and a plethora of cut scenes, but they now flow in and out of each other in more seamless fashion. Many times I was watching a cut scene wondering why Drake wasn’t doing anything, only to discover I had been given control once again. Where Uncharted 4 ups the ante over previous titles is: significant graphic improvements, a slightly more grounded storyline, and a lot more cinematography. Just going with gut feel, Uncharted 2 and 3 each contained about 25% cut scenes. In Uncharted 4 it feels like 50%. As a whole, it’s as close as the gaming industry has so far gotten to merging the silver screen with the gaming screen. (Despite the graphical improvements, I still can’t help but feel an 8-bit pixel version would be the best Uncharted game given how abstract story, gameplay possibilities, and sh’mups are from one another.)

Thus, for players looking for an open world, sandbox experience wherein player choice and agency are tantamount to enjoyment, Uncharted 4: A Thief’s End is not the place to go. Scripted from the word go, it’s a linear experience that holds the player’s hand throughout, giving them control only in the exciting and puzzly bits. As well realized as the story is, there were times I was wondering whether it wasn’t too much—like I’d paid for a CG movie rather than a game, which in turn sometimes made the shootouts and platforming feel more like a task than fun. At nearly every occasion I could predict when and what cut scenes were coming. “Just finished a platforming and shoot out, arriving at a major point in the quest: time for the villain to make an appearance...” And nine times out of ten, my predictions were right. Adding to this is there are many ‘action sequences’ wherein the player need only spam the punch button until the game’s programming decides you’ve done it enough to activate the next point in the script. For example, there is a prison fight scene early in the game where mindlessly pushing □, □, □, □, □, □ has little correlation to the fighting on screen, dialogue, or outcome. The player need only push □ and eventually the next point in the story is reached. Gameplay, or only simulated gameplay?

Controls remain inaccurate. Climbing is a cross between smooth transitions to different grab points and air humping as Drake tries but fails to grab the next point which. is. so. damn. close. but. for. reasons. only. the. game. knows. cannot. be. grabbed. hump… hump... hump... Likewise, selecting cover is not always a sure thing. Drake may be standing in front of a barrier which would seem the logical choice for cover, but after pressing the cover button, he finds cover at a nearby pillar or wall (where he is subsequently shot).
But gameplay does exist in other areas—the areas where Uncharted built its reputation. Essentially a complex version of whack-a-mole (enemies pop up, you shoot), A Thief’s End contains lengthy shoot outs like earlier Uncharted games, rounded out by the aforementioned puzzle platforming, logic puzzles, vehicle driving sequences, as well as a handful of one-time scenarios. Developers also added new functionality, including stealth mechanics (generally following in the footsteps of the Assassin’s Creed series) as well as a retractable line (a la Batman) that Drake can use in the platforming sequences to swing from beams and other overhead objects.

I have never been convinced by Nathan Drake as a character, and while A Thief’s End goes to greater lengths to humanize him, it still does not convince. Stereotypical not the term, rather ‘out of place’, Drake seems a clean cut American bro (square jaw, wise cracking, buddy-buddy, etc.) not a mass murderer of Parkour excellence. By comparison, Lara Croft and Indiana Jones are more convincing. The main issue is that the gap between believable character and unbelievable story is never covered—and cannot be. In cut scenes Drake is portrayed as a torn soul trying to balance a difficult upbringing, a domestic life, marriage, as well as a desire to adventure—all which would seem to make him more real. Yet in subsequent scenes Drake is plotting and stealing, mindlessly murdering hundreds, and part of secret histories that have fantastical (i.e. unreal) moments—all of which makes him unreal. Sure, it’s just a game, but its parts lack resonance. Another way of putting this is, Drake seems an empty caricature—more an excuse for a video game than a character that can be fleshed out, which in turn makes a good portion of every Uncharted game, including A Thief’s End, ring hollow. In this regard, Drake’s Fortune, the first Uncharted game, was better considering it just presented him as an over the top video game character, no back story or attempt to humanize.

In the end, Uncharted 4: A Thief’s End is the Hollywood blockbuster Naughty Dog Games were trying to create in video game form, which is a good and bad thing. Graphically speaking, the game is amazing. Filled with the wonderfully rendered dramatic, melodramatic, and epic scenes one expects of a gun-toting, treasure-hunting adventure. Look any deeper, however, and there is little of substance. With the increased percentage of cut scenes and subsequent reduction in player agency, A Thief’s End is often less game and more cinema. Moreover, the attempt to develop Drake’s story through mature, human scenes with his wife and as a youth doesn’t complement the cheesy one-liners, pulp plot, and the fact Drake remains a mass-murdering gymnast. Gorgeous, yes, but overall just as immature as the previous Uncharted titles. I guess the formula has finally gotten old for me…