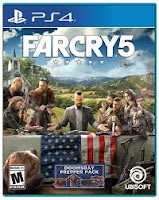 As previously mentioned, I literally spent decades away from video gaming, only returning with the console generation currently in place. Naturally, I missed a lot—a lot. I stopped when 3D gaming had just appeared and was therefore shocked to see how far it evolved; Tomb Raider on PS1 is an entirely different experience than Tomb Raider: Definitive Edition on PS4. It means I also missed the entire evolution of Far Cry games—almost a dozen, and counting. Seeing the most recent title had a chance at real world relevancy (gun-loving religious cult takes over a portion of rural America) and wanting to know how a franchise could arrive at its twelfth iteration (depending how you count) without falling apart somewhere along the line, I decided to have a go at Ubisoft’s 2018 Far Cry 5.

An open world, first person shooter, Far Cry 5 is at its core the infiltration and take down of the religious cult calling itself Project at Eden’s Gate (PEG). Led by the charismatic (in cable tv terms) Joseph Seed, the cult has steadily taken over Hope County, Montana using a combination of fundamentalist Christian ideology and an undying (har har) belief in the right to bear arms. PEG gaining followers (or corpses) via force, the federal government catches on and sends a squad to arrest Seed. The game opening on that arrest, things do not go as planned, and the player suddenly finds themselves alone in the mountains and forests of Montana with the cult and Seed hot on their heels. Let the fun begin.

The cult occupying outposts, building monuments, patrolling the roads, taking hostages, terrorizing towns, and in general taking over Hope County, Far Cry 5’s central gameplay mechanic is to earn Resistance Points by destroying their operations one piece at a time, and in that process be able to earn enough points to tackle the bosses, and win the game. Money needed to buy and upgrade weapons, it can be acquired through raiding and looting, but can also be gotten through hunting and fishing—a natural fit to the beautifully rendered Montana landscape. On top of this, there are a number of mini environmental puzzles that lead players to stashes of upgrades, special weapons, money, and other goodies. Driving, flying, shooting, and stealth the main mechanics, players can go in to situations guns blazing or sneakily, both options equally viable toward victory.

The major element of choice that Ubisoft recently experiments with in its open world games is: how to create a story campaign that fulfills itself non-linearly. Where titles like Uncharted and Tomb Raider force players to follow a single storyline, games like Watch Dogs or Ghost Recon: Wildlands set a story premise at the beginning, give players the end target, and then, with as much freedom as possible, allow players to achieve that target along lines they see fit within the game’s system. And with Far Cry 5 this really works well. Three side bosses needed to be taken down before players can tackle the big boss Joseph Seed, how they go about accumulating the points to take down these bosses is up to them. I love Witcher 3, and to some degree it also allows players to roam its open world how they see fit. But ultimately players must conform to the storyline or progress cannot be made. In Far Cry 5 and its Resistance Point system, progress is made with essentially anything the player does. The amount of points earned depending on the activity and its complexity, all nevertheless contribute to the larger goal. To be clear, Far Cry 5’s story cannot hold a candle to the Witcher 3’s let alone light a match, but in terms of the pure freedom allowed to accomplish the game’s objectives, it outshines. Given the main idea of Far Cry 5 is taking down a cult whose beliefs include the freedom of religion and guns, I find this wonderfully ironic.

I have read complaints that Far Cry 5 is not political enough—that it does not develop its premise to the point of drawing a clear moral line in the dirt. I can’t help but feel many of these people were looking for a direct message along the lines of: ‘religion and guns are bad’. While I generally agree with this sentiment, it’s clear that Ubisoft is simply too massive a company with too many stakeholders (i.e. a wide spectrum of political beliefs supports its financial wellbeing) for them to come across with so overt a political message—to choose sides, as it were—without losing a good chunk of said support. It seems obvious Ubisoft believe Far Cry 5 is foremost a game, not a political platform.

The game’s premise alone may be political statement enough, however. Aliens, zombies, gangsters, robot dinosaurs, demons, ninjas, enemy soldiers—these are the typical cannon fodder of video games. In previous Far Cry games, enemies were likewise abstract: pirates, mercenaries, arms smugglers, etc.—aka people “ok” to kill. In Far Cry 5, however, the enemy are people in America’s backyard, people whose enthusiasm for fundamentalist religious values and 2nd Amendment rights rides the fine line between the patriotic and dangerous. They are our neighbors and fellow citizens—people who perhaps even play Far Cry 5. Potential threats to real-world life and safety, it’s nice to see a game portray them a step away from real terrorism. This lack of abstraction is, I believe, political statement enough.

But gun-loving, religious kooks are not the only characters the player will encounter in Far Cry 5. Natural parts of the American demographic, and therefore natural parts of the game’s, so too does the game feature conspiracy theorists, war veterans, freedom lovers, and all other manner of gun-loving people. It’s no surprise then that not all of the gunfights, shootouts, death, etc. are initiated by the player. It’s not uncommon to hear gunfire in the distance, and upon approaching find locals and cultists in a bloody shootout. If one looks at America from a certain, small, very exclusive viewpoint, this conflict, made from religion and half-baked opinion, and spiced with bullets and blood, is not too far removed from reality.

Overall, Far Cry 5 has an intriguing premise that emphasizes open-world gameplay over politics, and tries to make use of its beautiful, open world depiction of Montana in many natural ways. Hunting and fishing are integral, as is riding four-wheelers, flying puddle jumpers, driving 4x4 trucks, etc. From cars to towns, characters to animals, the game looks and feels like rural Merr’ka. The main storyline is not the most sophisticated; there were many moments I rolled my eyes at its cheapness. (Only the front end and some of the side missions fully engage.) Thus, emphasis clearly was placed on giving players freedom to accomplish the game’s goals as they see fit (versus step by step story direction), which, fair enough, is a real niche in the market, and here is delivered in a tight package.