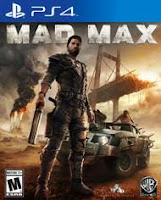 For those who missed it, the film Mad Max: Fury Road (2015) was a superb re-visioning of the 1979 cult classic Mad Max—even better, in my opinion. Finding a neat niche in the post-apocalyptic landscape where tribes driving wildly modified vehicles clash in the dry and dusty Australian outback, director Frank Miller reduced humanity to its bare frame, gave it fire-breathing monster trucks, and asked: what of the individual who has lost all including hope? Creating one of the best open world games of the PS4 generation, Avalanche Studios complemented the release of the 2015 film with the driving and fighting game called simply, Mad Max. (For the record, there is no connection between the film and the movie.)

Driving toward the Plains of Silence on a quest to find inner peace, Max Rockatansky is suddenly attacked by a passing convoy of heavily armed vehicles. He manages to get in a few shots at the convoy’s leader, Scabrous Scrotus, but ends up lying beside the road, naked, beaten, and without a car. Recovering, Max finds a corpse, loots the clothing, and ventures into a nearby cave for shelter where he finds Chumbucket, a semi-literate hunchback who dreams of building the greatest car the Outback has even seen, the Magnum Opus. Convincing Max of the dream, together the two start collecting parts so that Max can get his revenge on Scabrous and get on with his quest.

If that sounds like a weak storyline, one built on gathering and collecting parts and supplies, you wouldn’t be all wrong, and you wouldn’t be all right. Gameplay is in three primary modes: vehicular combat, man-to-man combat, and scavenging, which means Mad Max makes for more than the average looter/shooter but does rely heavily on collecting. And there are several side-activities, such as Death Races, convoy destruction, fortress takedowns, and wasteland missions that desert inhabitants send Max on (blowing stuff up, kidnapping, lair invasions, etc.), all of which contribute in some way to upgrading Max’s character and the Magnum Opus. Another way of putting all of this is, the enjoyment of Mad Max is not necessarily to be found in the main campaign, rather in the activities and actions which contribute to said campaign, as by itself the story is quite straightforward: level up to get to Gastown and confront Scrotus. (For the record, the final quarter of the story/game picks up pace significantly, and launches into an exciting if not brutal if not muddled climax.)

A revenge tale loosely gluing its pieces together, Mad Max is certainly more an open world experience (and most of what that entails as of the PS4 generation) than narrative experience. Fast travel points, lowering regional threat levels, collectibles (survival and otherwise), high points to get map locations, character and car upgrades, fetch missions—these and other gameplay activities force the player to confront the question: do I like Mad Max’s style of busy work and the escalating challenges that come with it? For me personally, I love the aesthetic of the film Mad Max: Fury Road, and Avalanche delivers it in the game in spades, meaning driving around, bashing away at other cars, getting in fist fights, and otherwise trying to survive in Miller’s version of car-pocalypse is wholly enjoyable chaos. It’s great seeing the Magnum Opus evolve from rusty sedan into spiked, flame-spewing death ball. I didn’t mind grinding scrap to get my revenge on Scrotus as the fun was in the journey. I do, however, understand if others disagree.

For those looking for more positives, Mad Max has a lot going for it. First is the singularity of the setting. Fantasy rpgs sometimes feel a Medieval dime-a-dozen, but there is no rpg like Mad Max. A post-apocalyptic desert where humans have organized themselves into primitive tribes and gasoline is treated like holy water, the resulting vehicles are gonzo—wild, heavy metal designs with skulls and armor that are great fun to smash and crash. Dropping these wild creations on top of a vividly realized Australian Outback littered with rusted hunks of civilization’s past makes for a unique gaming environment enjoyable unto itself. The rpg system is well thought out, and for as much as it is designed to be a grind, was designed to be a grind in synergistic, momentum-building fashion. The player can feel a little underpowered at the outset, but as the upgrades snowball Max becomes the terror of the Outback in hand-to-hand and car combat.

Another positive note is the relative lack of hand holding. The basics are explained, but there is a lot left for the player to discover on their own. (Experimenting with the harpoon on the Magnum Opus, for example, is fun, as is discovering the secrets of the deep desert.) And lastly is how death is handled. Not as potentially ‘serious’ as Dark Souls games, nor something that can be staved off in 10 seconds by ducking behind cover and waiting for health to regenerate a la the Uncharted series, taking damage in Mad Max requires finding water or food to replenish, and when death does occur, there is not always an immediate return to the exact point of action. All this forces players to be truly prepared and careful approaching enemies, enhancing gaming intensity in the process.

If there is a negative aspect, it would be the overall size/length of the game. I spent 29 hours in the main storyline and completing roughly half of the side activities. I feel this is 8-10 hours too long, or, in the game’s terms, one too many major regions to explore, lower the threat level, and defeat the boss of. Eliminating Gutgash’s territory (and adjusting the rpg elements accordingly) would, for example, mean one less region to stretch the already thin story, less grind, and an overall tighter package with the same missions, same delicious car combat, and same story end. Ironically, it’s the first 10-15 hours of gameplay when exploration is at its lowest that the game feels the largest/longest; I’ve spent this much time, collected this much scrap, driven this many miles, but only uncovered two regions of the map?!?!? Again, once the upgrades start truly kicking in and the missions start heading to all parts of the map is when the game gains momentum and the size/length become less daunting.

Recommending Mad Max is therefore quite simple: if you enjoy the Assassin’s Creed series, Ghost Recon Wildlands, or the Far Cry series, then there is a very good chance you will also enjoy Mad Max. Avalanche Studios put a lot of time and effort into creating a game that wholly delivers on the films’ unique desert aesthetics, simultaneously offering a varied and interesting open world, action/adventure experience. The main campaign is not the most sophisticated, and for some gamers there will be too much busy work. But let’s be honest, bashing around in a car that looks like Satan’s spawn on the plains of hell is great fun.