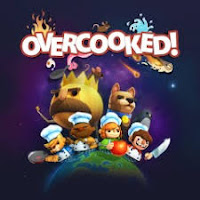 My wife is a gamer—not a gamer-gamer whose life revolves around our console, but there are no problems picking up the controller if she has a couple free hours in the evening. (She’s been playing Witcher 3 for about a year.) For Christmas this past year we got a second controller, which means our house has new options. Looking through the lists of worthwhile couch co-op games (not a lot, it seems), I came across a few that were universally recommended. Among them was Overcooked, and seeing it on sale for dirt-cheap on the Playstation store one day, I picked it up. All I can say is: marriage therapy.

I have not checked, but I would guess Overcooked can be played single-player. But who would want to? All the game’s fun in interaction and team play, in Overcooked players play as chefs in various kitchens who must prepare and combine ingredients to meet customer’s orders, all against a clock. The first kitchen is pretty straight forward: players chop vegetables to prepare salads and serve the plates—typical restaurant kitchen activity. But after, things get wonky. The kitchens which follow change things up. Some feature moving counters, some split in half every minute, some are located on moving cars, some feature rats who steal ingredients, and so on. If working together to coordinate and prepare orders under the pressure of time is not enough, then the wacko-kitchens add a layer of complexity. On top of this, the orders become more complicated (salads are much easier to prepare than burgers or soups), all of which pushes the game toward that bouncy ball of chaos and fun “I need one more onion!” “Take the pot from the stove, it’s burning!” “Wait until I serve this meal!” “Wash some plates! I have nothing to put the burger on!” It’s when players reach flow state, moving in and out of each other’s paths with purpose, working in sync, and preparing orders at speed (i.e. they know where the bouncy ball will bounce next), that the game becomes extremely satisfying. Yes, marriage therapy.

Developers attempt to overlay a story onto gameplay. It is cartoonish and weak, which fits the overall motif, and does serve in some minimal fashion to tie the pieces of the game together. At the same time, it feels a bit over the top. Developers could have overlaid some rank system or competition for master chefs (like old school games would have), and perhaps achieved more. But tough to say. To be clear, nobody should play Overcooked for the story. It’s all about the chaotic fun.

Only two buttons required, anybody can play Overcooked. Success, however, is not so simple. Nothing to do with memorizing boss attack patterns or solving a platform puzzle, Overcooked is all about player organization and teamwork in fun settings. There will be as much laughter as frustration. Best for partners and small groups of friends interested in such games, it could also serve as an interesting team integration event for companies. I joke about marriage therapy: the game is simply not that far reaching. But for those moments when everything is going well, so too is my marriage.