Non-fiction: Review of The Planets by Andrew Cohen & Brian Cox 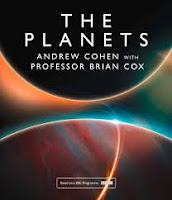 I am a layman when it comes to astronomy. I have a high school education (largely retained), and decades of random reading about the heavens (perhaps less retained). But I am also a star gazer. It’s nice every now and then to go out at night, stare at the sky, and let the mind wander where it will. It’s precisely moments like that we forget about the minutiae of daily life and remember that Earth hurtles 30 km/sec through a void, not to mention that the myriad of life around us, billions of species, is not forever—that the greenhouse effect, regardless accelerated by humankind or not, will eventually burn everything to the ground, leaving only rock. Bringing to one place all the pertinent information on our solar system known as of 2019 is the BBC’s The Planets by Brian Cox and Andrew Cohen (2019). It is star gazing of the most informed variety.

BBC embarking on a similar planets project twenty years ago, the 2019 edition of The Planets integrates what was known then with the information that has come to life or gelled in the meantime, all to create the most detailed picture of our solar system to date. Why is Mercury’s orbit the most irregular? How did Venus’ ecosystem come to be so hellish? Is/was their life on Mars? What hope do Jupiter’s moons offer for human life occurring beyond Earth? What exactly are Saturn’s rings, and how did they come to be formed? These and many, many other fascinating topics and facts are related, in lucid, wonderfully structured fashion. If there is anyone on Earth who knows how to collect, organize, and present information in an interesting, engaging fashion, it is BBC. The material in the book is enough for a semester’s course providing the tightest summary of the solar system.

The Planets follows a natural progression. Starting with the center, the sun, and working its way through the four terrestrial planets, through the gas giants, and ending on the singular dwarf planet Pluto, the reader gains a summary picture of the solar system unlike any to date. How planets formed, why some moons are volcanic and others frozen solid. The simple mind boggling distances to the outer gas giants, as well as the mind boggling ambition, intelligence, foresight, and precision of the world’s space programs. It can easily be assumed that many readers will go out and promptly buy a telescope. It’s that powerful.

The Planets is also, indirectly, a history of the world’s space programs. While relating what is known about each planet, Cox and Cohen discuss how the information came into existence through the numerous space programs—NASA, ESA, Soviet, and Russian. Some projects are common knowledge—Hubble, Voyager, Curiosity, etc., but for laymen like me, many are not. Their fates (to crash land on planets, hang forever in orbit, or slide silently out of the solar system) likewise explained, due recognition is given to these billions-of-dollars, highly specialized, peak of human technology space objects which have been successfully developed to give humanity the chance to learn about our solar system, which in turn directly informs our knowledge of the Earth.

In the end, The Planets is a fascinatingly presented, wonderfully explained, clearly laid out collection of information about the past, present, and future of our solar system. The time scales in the billions of years, the end of life on Earth a given, the secret histories of our mysterious, planetary neighbors cast in a deeper light, and our solar system coming to life—figuratively and literally, the degree to which mankind and technology have combined to get a good understanding of where our orbiting sphere came from in this book, is, and is going, is invaluable.