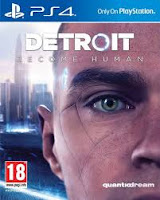 If this blog is any testament, I was a library child. Along with trips to school libraries, my mother regularly brought me to the local public one. (I still recall the smell of the carpeting and the silence it emanated.) I wandered the quiet, shadowed aisles, looking at spines and grabbing books that took my fancy. I read the Princess and the Goblin books. I read the Laura Ingalls Wilder books. I read all the fifty-something Hardy Boy mysteries (and the Detective Handbook), and even started the Nancy Drew series. I tried almost all the How to Draw books (and still could never produce as nice a drawing as the directions would have it). And of course, I read all the Choose Your Own Adventures I could find. I still recall having all my fingers acting as bookmarks, flipping between story branches as one ended to see where a different choice would have brought me. QuanticDream’s 2018 Detroit: Become Human brought me back to my Choose Your Own Adventure books, at least somewhat; my fingers didn’t fit anywhere except the controller...

Much more Isaac Asimov I, Robot than William Gibson Neuromancer, Detroit: Become Human is set in the near future where androids are readily available on the market. Child care to street cleaning, shop assistants to bus drivers, construction workers to janitors, the human-like robots are peacefully interwoven throughout society in controlled, seemingly benevolent fashion to serve humanity. But there are signs not all is well. Inspector Connor (himself an android), is called to the scene of a murder. He discovers that the perpetrator is an android who has learned his owner intends to replace him with a newer model, and lashed out. As the story moves on, and murders by androids start piling up, it’s clear the incident is no fluke. Something must be done to prevent a robocalypse. But is this something humanity, with its own vices, can help with, or will it just get in the way?

In attempting to answer this question, Detroit: Become Human is played through the eyes of three different androids, and subsequently three different storylines that interweave as the game progresses. The first is the latest, most advanced android model yet created, Inspector Connor. Along with investigating crime scenes, he becomes a pivotal point in the sequence of events that sees android-human relations change forever. The second is a caregiver named Kara. Owned by a lazy, drug-addicted, child-abusing gambler, Kara maintains the man’s ramshackle, suburban home while watching his daughter, Alice. And third is Marcus. Caretaker of a disabled, elderly painter named Carl Manfred, Markus lives in the best possible situation. Manfred open-minded, the pair regularly engage in conversations on art and the idea of android sentience and autonomy, that is, until tragedy strikes. Markus turned out onto the streets, he must find a new direction in “life”.

Choose Your Own Adventure video game-style, Detroit: Become Human excels at scene staging and direction. Some decisions required faster than others, the overall experience is an extended sequence of cinematic, quick-time events in which the player, by choosing among the presented options, has relative control over the direction of story. It being possible for the three main characters to die in the course of the game, decisions must be considered carefully (or quickly, depending on the scene). It goes without saying, like my bookmark fingers in the Choose Your Own Adventure novels, replay value is extremely high if the player is interested in learning where different choices could have taken the overarching narrative.

One other interesting element exists in the game: emotional intelligence, or at least something approximating it. Playing as Connor, the player is required to interrogate several NPCs. The NPC’s willingness to respond fluctuates, something which the game’s writers aligned with the degree of emotional intelligence the player deploys. Show too little concern for the NPC, and you’ll be shut down. Try to force the issue and likewise you will get a cold shoulder. Show the right level of sensitivity and understanding, and doors will open. Video games most often a medium for violence (if I had a dime for every first person shooter…), it’s interesting if not unique to see the usage of soft skills in a game.

But there are likewise some real issues with Detroit. The first is shallowness of the narrative. For a game so wholly dependent on the quality of its story, it falls short. Most scenes lie within the range of b-movie to blockbuster. Rarely are there are any mature moments that assume a higher degree of player intelligence and require real ontological sweat to make. Kara’s thread, for example, starts in the home of said drug-addicted, gambling abuser. His actions don’t come any more cliché, and the resulting decisions Kara faces couldn’t be more black and white. The momentum of Marcus’ story arc after he exits the artist’s home is as predictable as the sun, touching upon stereotype after stereotype. Gameplay itself is already based on ‘going through the motions’, but with Marcus, it felt like his story is also just treading a path everyone expects. (I even started laughing out loud at the Robot Jesus scenes toward the end…) Only Connor’s story has moments of real surprise and decisions that feel truly adult.

Thus it’s easily possible to complain the game’s ethics are too cut and dry (not challenging or complex enough in the context of slavery or android sentience), but I would argue that we should be holding the game accountable for something additional: manipulation. I read a boat load of science fiction, meaning I have read my fair share of android stories, and thus have seen varying degrees of presentation: from clumsy, two-syllable robots to fully human parallels. Like Philip K. Dick’s novel Do Androids Deam of Electric Sheep? (aka Blade Runner), Detroit: Become Human is entirely in the camp of the latter. Nothing distinguishes the game’s androids from humans. But where Dick’s novel questions the nature of human and android sentience, Quantic Dream take their vision in the direction of android rights, and questions these rights through the lens of discrimination. Given the androids are human in every visible way, this doesn’t truly challenge their right to autonomy, and by extension players’ sympathies. This leads to the question: where’s the tension? Where’s the truly intellectual conflict to elevate the game? There isn’t any, really. I would guess the overwhelming majority of people who play side with the androids, and of the minority who don’t, there is likely a sense of fun at work knowing it’s just a game.

I think it’s here that a player’s appreciation of Detroit’s agenda is truly tested. If the game is viewed as a metaphor making people more aware of discrimination, then certainly the game can be appreciated as it successfully puts the player in the shoes of discriminated people and builds valuable sympathy for them. If, however, the game is viewed as seen on the surface, i.e. the rise of android sentience and the resulting human discrimination, then I can’t help but think the game must be taken as something intellectually simple-minded, and manipulative for it.

A third issue for me was style of game play. Detroit: Become Human is essentially a walking simulator built on quick-time events. After nine or ten hours of walk here, push that, read pop up, choose response, repeat, it gets repetitive given the urgency of the music would seem to push tempo rather than placate it. Literally going through the motions with the joysticks to open drawers, push doors, stand up, etc. at first seems natural, but slowly it gets in the way of what truly drives the game: the story.

All in all, Detroit: Become Human is a beautiful game filled with amazing set pieces. In terms of clean, robot futures, I daresay it is the best realized on screen yet. Also, direction and editing are so clean and crisp I daresay Hollywood could not do better. All scene transitions are smooth and flawless as much as the graphics are clear and pleasing. And if there is anything else positive to say about Detroit, then it would certainly be there is nothing else like it on the market. It is truly unique, and for that is worth a play through. Where the game starts to lose traction is the repetitive nature of the quick-time events. It loses further momentum when the storylines begin devolving from complex to simple, rather than vice versa. Rarely are the player’s choices intellectually, morally, or emotionally complex. Such decisions do exist, but more often they are decisions which make themselves. Do I kill this sentient being, or not? Hmm… This results in a situation, as stated, wherein the player’s enjoyment will likely hinge upon how much metaphorical value they see in the game’s story premise. Grab this, and the game should be lauded. Where most video games these days flaunt taking life, Detroit: Become Human asks you to take a look at the different ways we respect life.