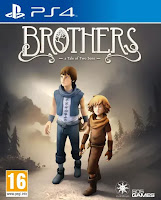 While single-player games can be a lot of fun, something I can sink hours of time into, I still prefer couch co-op.  Something about working together with someone sitting beside you to solve a puzzle or take on a difficult level of enemies (and the boss!) is more satisfying.  But these days there are relatively few really good couch co-ops.  Most games designed for online multi-player, gone are the hours of fun with: one Nintendo, two controllers, and a game that was almost inevitably designed for at least two players.  The market today is not devoid of such games (Overcooked, Lara Croft and the Temple of Osiris, Never Alone, Wipeout and others keep the type alive), but they are certainly the minority.  Where most Nintendo games were couch co-op, modern games are not.  But a 1.5 player game?  A wonderful adventure stuck between a one- and two-player experience is Starbreeze Studio’s 2013 Brothers: A Tale of Two Sons.  How can a game be 1.5 player? Let me explain…

Brothers is the story of two boys, Naiee and Naia.  Their father lying deathly ill in the family’s small, seaside hut, the village doctor sends the pair on a mission to the Tree of Life to collect the waters that will save him.  Both the boys able climbers and eager to help, they embark on the journey of a lifetime to get the valuable resource.  Norse in theme, their journey through the fields, mountains, and beyond is full of surprises, good and otherwise, the pair must pass to get to the Tree of Life and help their father.

Brothers is one of those adventure games whose fun and enjoyment escalate exponentially with each new revelation and scene.  What starts as a quotidian day in the lives of Medieval farmers, slowly intensifies into an adventure that every boy would love to be participant to—trolls, giants, aeries, fantastical creatures, included.  But the joy of playing is tempered with strong emotional content—the primary component which intensifies.  The game takes only about 3 hours to complete, but packed into those few hours is more heart, drama and fun than one finds in most larger, AAA games.

Why Starbreeze chose to make the game playable only on one controller is something I’ve gone back and forth over in my head.  Though it can only be played on one controller, it is, however, simple enough that two people can play it together, each holding one half of the controller.  Only three buttons used for each brother (the joystick and two shoulder buttons), it’s entirely possible for a pair of people, sitting very close, to share the one controller.  Is this by design, i.e. to bring people closer, dare I say, as brothers? Or is it just cheaper design, i.e. less money spent on development and interface?  I don’t know, and it doesn’t matter.  It is what it is, and I had a blast playing with my small son on one controller—the 1.5.*

In the end, if you’re looking for a warm, touching journey that brings two people together in puzzle-solving, cooperative fashion, then Brothers satisfies the bill.  Playable by one person (with thumbs of two minds), but recommended to be played by two people (holding one controller), it’s a game that will charm you, occasionally hit you with a sense of wonder and adventure, and ultimately leave you with a bittersweet feeling of how precious life is.  Another reason to play the game with a second person is that the game will likely be too easy, whereas with two, the coordination of the brothers’ movements becomes much more challenging, and sometimes laugh out loud funny.  All in all, a very unique title worth the small price point.

*My son was five years old at the time, something that as we played I came to understand is too young for the game.  About halfway through, after seeing something that was too much, I distracted him, turned off the Playstation, and later finished the game myself, alone—a good choice given that the content only became more difficult for a five year old.  Suicide, horror elements, battle, blood, and death, I would not recommend this game for young children.
Posted by Jesse at 8:18 AM