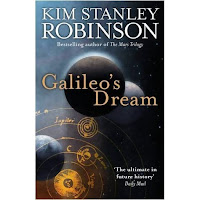 From a few, solid perspectives, Kim Stanley Robinson’s 2009 Galileo’s Dream is the perfect bit of historical fiction. Where some modern writers will relay history in near-fictional form, i.e. adding dialogue, emotions, etc., not all of which are directly taken from recorded history, this approach can often feel disingenuous, like the writer is preying upon our acceptance of their conjecture. Galileo’s Dream thrusts in a different direction: science fiction.

Robinson clearly having pored over biographies of Galileo and the Italian mathematician/scientist/lens maker/astronomer/author/physicist/engineer’s own written works, not to mention histories of Galileo’s era, the Catholic church, and many other contributory sources, a good two-thirds to three quarters is a mimetic imagining of the man’s life—dialogue, emotions, stream of consciousness, etc. But where Robinson departs from the presentation of historical fiction is to introduce the ludicrous. Yes, the ludicrous. Sending Galileo into the future, particularly into a war being fought among Jupiter’s moons by the future of humanity, the 16th century mathematician meets the next millennium.


At various points in Galileo’s life, Robinsons whisks the mathematician away to the reach of Jovian space. He is thus able to interweave two sources of tension into the narrative. On one side is Galileo’s real-life, including clashes with the Vatican and dealing with a difficult family life, some of which Galileo brings on himself. Purporting Copernican ideals that directly undercut Papal teachings, Galileo’s desire to be honest and express scientific truth quickly gets him in trouble with the authoritarian conservatism of the Catholic church. But among Jupiter’s moons, Galileo’s troubles interestingly become more personal (rather than political, as one might expect given the war happening around him). Robinson using the man’s experience among the stars to confront emotional and psychological issues, the war happening in the background is the glitter and confetti providing sparkle to that portion of the narrative, but not its driving force. The story bouncing back and forth between the two settings, Robinson overall maintains a strong storyline within interest beyond historical fact.

It would be remiss not to finish this review without mentioning the importance Robinson places on Galileo as a critivcal iconoclast to human history. Too many of Galileo’s vices are described for the novel to be considered hero worship, nevertheless to not see the novel as the means to reminding modern society as to the importance and significance of Galileo in the rise of science, something which we take for so much for granted. Along with the non-standard manner in which Robinson breathes life into a biography, Galileo’s Dream is worth reading for that.

Thus, if you’re interested in the life of Galileo, Robinson’s novel is one way to learn more; the key points of the man’s adult life, private and professional, are arranged in engaging, narrative fashion. Robinson looks to get under the hood of not only the man’s deeds, but the psyche behind them, in an effort to try to understand what lead him to do the things history records him as doing. But there is more of substance available; a splash of science fiction sensawunda that adds a degree of interest to the book, helping usher Galileo through the phases of his life, even as a far-future war plays out along plausible lines behind him. This isn’t the best “biography” I’ve ever read, but it certainly is one of, if not the most unique.