Console Corner: Review of Lara Croft and the Temple of Osiris 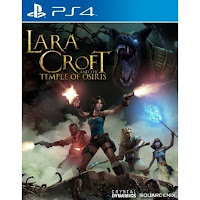 I’m not sure Tomb Raider has reached the Mario-spectrum of its life—able to boast a game in nearly every type over decades, but it has covered a number of them.  From puzzler to action adventure, mobile to console to PC, old school Playstation to latest school PS4, the evolution of Lara Croft in gaming has numerous waypoints.  Zooming in on the arcade feel of an action/puzzler is 2014’s Lara Croft and the Temple of Osiris from Crystal Dynamics.

Cooperative for 1-4 players (local and online), Temple of Osiris is a top-down isometric game that tries to marry the best of Tomb Raider puzzles with fast-paced, arcade style action, all set in an (extremely) pseudo-Egyptian setting.  Boiling the Tomb Raider formula down into its most fundamental ingredients, the game sees players using a basic set of moves to find and open gates, traverse moving and moveable platforms, gun down fantastical enemies, solve environmental puzzles, and defeat bosses—all linked by the thinnest of stories as Lara and her friends attempt to take down the evil god Set.  Good for drop in and drop out, the game is fast and furious shooting with brain teasers, nothing deeper in terms of story and character.

Despite how straight-forward things are, it is, however, a layered experience, giving players some sense of progression and depth.  This includes finding a number of different weapons, big to small, all of which have different stats—firepower vs. rate of fire, etc.  There is a hierarchy of rings that players can purchase with the in-game currency of jewels (no micro-transactions), which in turn are used to upgrade character health, damage output, resistance to fire, poison, cold, etc. For players seeking a real test, there are a number of challenge tombs that allow players to earn extra perks, for example completing an area under a certain time, killing a number of enemies using a certain method, lighting all gas lamps, and other conditions beyond just finding the exit.  It is not the most nuanced of games, but it does strike a medium chord in terms of how much customization and opportunity for character improvement the player is offered beyond just shoot and solve.

As mentioned, the storyline is not the focus of Temple of Osiris. Where most big console Tomb Raider games—prior and present—convey a sense of plot progression, interrupted occasionally by fantastical elements, Temple of Osiris is full on comic book action.  Not by default a bad thing, players should, however, at least be aware what they would be getting into if the recent trilogy of story-driven games are motivating them to look into what else is available on the current selection of consoles.

In the end, Lara Croft and the Temple of Osiris is not a Game of the Year contender.  That being said, it’s a fast-and-furious game that offers arcade-inspired fun in a way that is truly cooperative (if played multi-player).  While it adapts nicely to single-player gameplay, it’s arguable that the game shines brightest in co-op.  Engaging puzzles interspersed with bits of shoot-em up action, it is a lighter version of the original Tomb Raider games without a grabbing storyline.  But when you’re strategizing (and arguing) with your co-op partner about what to do next, you don’t really care, which is the game’s up-side.  Like many mid-length games it can be forgettable, but the time spent with someone else solving puzzles and taking down baddies is not, and for that comes the game comes recommended.
Posted by Jesse at 7:27 PM