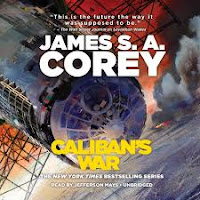 Shorter review: if you enjoyed Leviathan Wakes, you’ll definitely enjoy Caliban’s War (unless you are a space opera connoisseur, sensitive to the slightest details that affect a universe—but even then...)

Longer review: If anything, author duo Daniel Abraham and Ty Franck’s second entry in The Expanse series Caliban’s Wake (2012) shows the success of the first novel was not a fluke. Like Leviathan Wakes, Caliban’s War is the perfect genre beach read. Story purpose is always clear, yet often moves in organic yet unpredictable ways. The characters are on the right side of 2D, making their plight relatable. And the plotting between the character viewpoints never allows the narrative to slow, even when there isn’t any direct conflict on screen.

But Caliban’s War is not a repeat of Leviathan Wakes. It takes the characters from Leviathan (specifically Holden and crew), plucks a couple key characters from what was the background of Leviathan, puts them front and center, then evolves the wider setting to its next logical point in a story that is an equally entertaining, page-turning read.

Venus is being overrun by the protomolecule, and the solar system is starting to panic. Earth’s government has machinations within machinations, and Crisjen must use her wits to try and weed out its most malevolent elements. Trouble is, they may have the drop on her. On Mars, a crew of marines is wiped out by a new super-soldier unlike the solar system has never seen, its composition seeming to bear something in common with the life-force emerging on Venus. One marine surviving the attack, she makes the trip to Earth to tell her story to the UN. And on Ganymede, a biologist tries to track down his daughter, a small girl who seemingly was kidnapped when an army laid waste to the station. Through these storylines, Holden and his crew try to keep their heads above water as they move from fray to fray, trying to do the right thing for humanity and stay alive.

Self-contained but expansive, Caliban’s War is like Leviathan Wakes in that the story has a natural beginning and end, yet leaves enough open-ended for continuation. The reader can close the book satisfied and never come back, but for those who want more, there is room. The books are not literary in intent, but technique is strong. The books have extremely little fluff, the diction is tight and on point, pacing is excellent, and there is enough humanity, particularly moments of human sensitivity, that the reader’s intelligence doesn’t often feel insulted.

As stated above, if you liked Leviathan Wakes, then Caliban’s War is an easy recommendation. For me personally, the series is becoming my go-to read when I just want something light but entertaining that doesn’t condescend (well, it does in moments—vomit zombies anyone?). If I wanted to be really honest, I would say it borders on crack-cocaine; when I finish one, I want to pick up the next—not because of any cliffhangers, but because the authors have started to build a trust in me that the product is dependable; the shiny, sexy, flash-bang sensawunda that science fiction so often aspires to be, awaits. Time to hit the crack pip—I mean, on to Abaddon’s Gate…