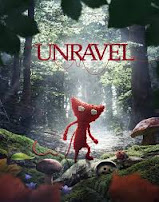 While there are today games featuring pixel cavemen pew-pewing squares at one another, 2D platformers have existed in video game form almost since the dawn of time. Super Mario Bros the spark setting off the powder keg, since then hundreds if not thousands of side-scrolling shoot ‘em ups, beat ‘em ups, and figure ‘em out ups, have graced (and disgraced) the screen. I think it’s fair to say, however, that it isn’t until the past decade or so that puzzle-platformers have carved a niche for themselves among the Streets of Rage, Contras, Hollow Knights, Shovel Knights, and the like. Limbo, Little Nightmares, and Inside are good examples of games that require more active brains than twitchy thumbs given players must think their way through a game rather than shoot or punch. Entering this arena with a family friendly, bittersweet spot of fun is Unravel.

In Unravel, players take on the role of a yarny, a small stick figure made of yarn, who uses his string to lasso, swing, swoop, jump, and otherwise navigate his way through a variety of big person settings. Rural and urban, players are ostensibly chasing a series of mementos that the yarny attaches to a photo album with the completion of each level's puzzles. Collect all the mementos, and you win.

As stated, Unravel is a family-friendly game. But it is not for the simple-minded. While most puzzles can be solved in a minute or few seconds, many require lateral thinking that can end up occupying several minutes of time to the point small children 5 or 6 six years old likely have no chance. How to get from here to there? How to lift that thing? How to access that point? Where to swing to next? It's not a brain burner of epic proportions, but it does certainly get the gears turning.

The graphics of Unravel are wonderfully pastoral—mostly. Various points of the Swedish landscape brought to realistic life, the cartoonish yarny and his red line of yarn cut a sharp contrast to forests, rocks, fields, rivers, etc. The settings are tied directly to the game’s theme. Where the yarny unravels his yarn to get to the next puzzle, so to does the player “unravel” a series of memories and photos that bring to life the background story. Sad but sweet, Unravel will cause even the most hardened soul to pause. Wholesomely sentimental—a fact complemented by the score, looking through the album at the end can cause an ache or longing for things past, just as the joy of swinging through the last level give the player a feeling of exaltancy.

In the end, Unravel is a wonderful little puzzle platformer for gamers of all ages. The top layer is a cartoonish little character swinging his way through our world, having wonderful adventures collecting mementos. But beneath this lies a human storyline about families, growing older, and the passage of time—an unraveling of yarn metaphorically that is both bitter and sweet. Where so much of the history of side-scrolling video games is about blasting and slicing your way through this horde or that, Unravel comes as a wonderfully refreshing breath of fresh (Swedish) air.