Review of The Knife Thrower and Other Stories by Steven Millhauser 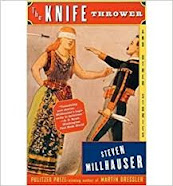 Steven Millhauser is a lightning point of fiction. For most readers of fantasy, however, the strike is in the desert. The writer's brand of fiction is too abstract, too myriad, too interpretive for quotidian genre readers. Many such voices rail against Margaret Atwood's portrayal of genre fantastika as 'squids in space', yet when faced with material the likes of a Millhauser short story—something wholly fantastical yet unfamiliar—they will generally falter. Which leaves Millhauser's readership in the interstices of sophisticated, literary readership that doesn't mind an injection of unreality—a minor group, unfortunately. The Knife Thrower and Other Stories (1998) is yet another piece of evidence why Millhauser is one the unheralded writers of contemporary American letters.

Likely the most approachable in the collection, the title story develops a simple premise that climaxes upon a simple aspect of the human condition. About a knife-throwing act coming to a small town, it works with the expectation, fear, and ultimately fascination that accompanies the danger and show, all in evocative fashion. A delicately poised story, “The Visit” is caught between a number of points. The story tells of a “not happy but not unhappy” man who gets an unexpected invitation to visit an old friend in the countryside. Things seem normal at first, until they aren’t; and the steady churn of quotidian life absorbs a new point upon which to delicately poise itself for the man.

Something mysterious, something unexplained, something feminine and adolescent... In “Sisterhood of Night” a secret society of teenage girls meets at night to perform strange rites. Or are they? Is the behavior, or are the rites so strange after all? This story captures perfectly Millhauser's ability to be a fingernail’s breadth from tangible, but still not there in tantalizingly realistic yet unrealistic fashion. Perhaps a bit too wishful in terms of justice, “The Way Out” nevertheless tells the story of a man’s encounter with his mistress’ husband in highly suspenseful and satisfying fashion. The taughtest tightrope between dream and reality, “Claire de Lune” tells of a sleepless teen’s moonlight walk, and the pleasures he encounters there. Strong mood piece that evokes innocence, joy, and the feeling of dreaming while awake—again, a superb example of why Millhauser is a master.

Many of Millhauser's stories entirely lacking dialogue, “The Dream of the Consortium” is exposition-only recounting of the evolution of a town's ageing department store. Millhauser's touch delicate, the story doesn't need to be read as a take on American capitalism or history given the imagination space provided. Another dreamlike vignette, “Balloon Flight, 1870” tells of a soldier in a balloon trying to escape war. The balloon, however, has its limits, as the soldier discovers—among other things.

And there are a handful of other, high quality stories in the collection. Millhauser maintaining a very consistent level of quality throughout his career, The Knife Thrower is as valuable to a first-time reader as it is to a Millhauser veteran. The NY Times bestseller lists may be populated by a lot of mainstream fiction, but it's often in niches, like Millhauser's, where the true works of care, quality, poise, and sophistication exist.

The following are the twelve stories collected in The Knife Thrower and Other Stories:

The Sisterhood of Night

The Dream of the Consortium

Beneath the Cellars of Our Town