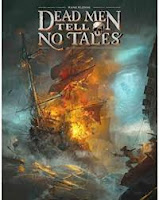 To this day, the best Pirates of the Caribbean movie is the first one (the one before Disney sunk their teeth in to suck the dollars from it with a franchise). It’s no Citizen Kane or Blood Diamond, but in terms of light entertainment, it’s a solid mix of humor, fantasy, cutlass duels, undead skeletons, and of course, pirates fighting over power and treasure. Capturing something of the feel of the movie in board game form is Dead Men Tell No Tales.

A cooperative game for two to five players, Dead Men Tell No Tales sees players exploring a burning ship, trying to loot as much treasure as possible while preventing the ship from exploding underneath them. The fires burn hotter all the time, not to mention skeleton fighters protect the ships’ treasures, meaning it’s not easy being a pirate. But if you want to get rich…

On top of each pirate character having a special ability, players are given five actions per turn to do any combination of move, recover strength, fight deckhands, reduce fire in a room, or loot a treasure. After each player’s turn, the ship, named Skellit’s Revenge, has its turn. Unleashing waves of deckhands and blowing the fires hotter, clocks (represented by six-sided die) tick in each room. When a room reaches six, it explodes, blocking any access it provided to other rooms, as well as raising the fire level in adjacent rooms. In between turns, new tiles are added to the ever growing board and tokens are drawn from a bag. Trapdoors, treasure, and skeleton warriors, you never know what you will pull. A constant battle between putting out fires (literally and figuratively) while trying to accomplish the game’s objectives, gameplay is a tense struggle that will see the players failing just as much as succeeding.

The production of Dead Men Tell No Tales is good. The art, including the modular tiles, player boards, cards, and dice, all fit a common theme of dark pirate-ry, allowing the flames and terror to really influence the atmosphere. (For the record, the game, besides a little splash of blood on the player boards, is entirely suitable for children.) All the pieces are sturdy and solid, crafted in either wood or thick cardboard. Having plastic miniatures to represent the skeletons, deckhands, and treasure guardians would be nice, but it would also add a layer of redundancy, i.e. these must also exist in the draw bag as tokens. These tokens strong and durable, I’m fine without minis. (Given the game’s popularity since its release, the designers have released a package of plastic miniatures for the pirates which can be used in lieu of the wooden meeples if players so desire—nice but not necessary.)

But perhaps the aspect of the game to be praised most is the excellent balance of individual effort and teamwork. Players have agency how they will spend their actions, but must work together to accomplish the larger goal. Given that the ship has a guaranteed turn after each player, an element of uncertainty is added that prevents a single player from mapping out the whole group’s strategy; said strategy would need to be reset after every ship turn, meaning alpha gamers' voices are conflated. Game state continually evolving, they are appraising the new situation with same fresh eyes as all the other players. Similarly, when the ship does get its revenge in a room and it goes Boom!, there is a collective sense of “Oh, things just got more difficult for us…” versus “That was Joe’s fault.” 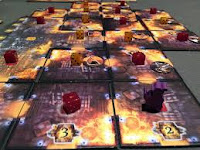 In working together, there is a collective feeling of success or failure that is not the responsibility of one person. Players plan, prepare, and strategize, but there is still enough of a random element to render the game nondeterministic. Not only does this mean that best plans can go awry, but it also means they can to the moon and back, a risk paying off. Regardless, everyone will laugh when a room goes boom. Lastly in the family area is that there is no perma-death. If your pirate happens to succumb to the fires, simply take another from the box and keep pirating. Considering that this in no way changes the group’s chances of success, credit must be given to game design.

If I had a gripe about Dead Men Tell No Tales, it would in fact be a niggle, a niggle about representation of theme. Pirates are great, pirates looting are great, and the idea of pirates looting a burning ship is also great. The one thing missing is the feeling of “ship”. Given that the game is modular and will be laid out differently each time, there is never truly the feeling of being onboard a ship—of moving around a rocking, confined deck. With the playing space constantly expanding, the player never feels they are on a ship—that they’ve reached the opposite gunwhale and only ocean lies beyond, for example. It feels more like a warehouse. The designers did an excellent job painting the players’ imaginations into a corner with the artwork and mechanisms (cover art, concept, deckhands, skulls & crossbones, etc.), giving them practically no choice but to imagine they are on a ship. But without said handrail, the idea of being on a ship not complete. The bigger problem is, I’ve tried to think of ways of giving the game a more ship-like feel, but can’t. It’s always at the expense of limiting the modular tiles, which are one of the game’s best features. They are what offer highest replay value. For example, providing players a board with a ship outline to fill in with the tiles as the game goes on would reduce variability, but it would also lead to a lot of doors that open to the sea, a situation which is likewise not representative of “ship”. I don’t know…

I niggle, but it’s for futile reasons. Dead Men Tell No Tales is a very good, very fun, very family & friends type of game. The art, board and pieces all look nice and are durably made. Pace is quick and fun, and can be understood by children and adults alike, though an adult should be on hand for play with younger children to guide matters. Gameplay gives players an excellent sense of cooperation and teamwork given the continually changing game state, and overall makes for a reasonable but not climactic sense of elation when the last treasure is looted. I would say even failure is fun. Pirates going down to fatigue. Deckhands swarming the deck. And exploding rooms leading to an exploded ship. They all feel great (even if the concept of “ship” never fully coalesces in the mind). If the idea of Pirates of the Caribbean in game form is appealing, Dead Men Tell No Tales is your huckleberry.