Review of The Bounty Hunter Wars trilogy by K.W. Jeter 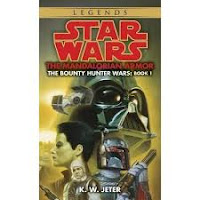 Note: this review is not for a single book, rather for the three novels, The Mandalorian Armor, Slave Ship, and Hard Merchandise, which comprise the Bounty Hunter Wars trilogy. I will not be spoiling any of the details of the latter novels in the course of the review.

About the same time Star Wars: A New Hope hit the big screen, George Lucas opened the gates to tie-in fiction. Relatively unknown and with not many examples, a couple decades later things changed with the publication of the Thrawn trilogy—episodes VII, VIII, and IX in novel form by Timothy Zahn. Evolving the Star Wars storyline in wholly organic fashion yet remaining faithful to the characters and ideas that made the movies so popular, tie-in fiction took hold and the universe exploded on paper. Numerous authors and projects were commissioned thereafter, including K.W. Jeter to write a trilogy about Boba Fett, now known as The Bounty Hunter Wars trilogy: The Mandalorian Armor (1998), Slave Ship (2001), and Hard Merchandise (2002).

Set in two time periods, events in the The Bounty Hunter War novels occur, firstly, after the conclusion of A New Hope with the Empire in full power. The Emperor is looking to eliminate competition from the Bounty Hunter's Guild and Prince Xizor is looking to gain power. The two make a devil's pact which finds Fett unwittingly in the middle of their little game. The second timeline is set just after the events of Return of the Jedi, and sees Fett being pulled, alive, from the Pit of Sarlaac. His saviors an unlikely duo, the small group quickly find themselves caught up in Fett's old life and in need of answers.

Such are the plot drivers of The Mandalorian Armor, first novel in the trilogy. What occurs in the two novels which follow carries over from those storylines, including Fett's rivalry with another bounty hunter named Bossk, his commission for a tough, rogue stormtroopers, and how Fett maintains his suave togetherness in the face of galactic conspiracy. Upon its epic conclusion the reader can say that Jeter does a good job of maintaining the character's cold, collected facade, but perhaps doesn't always deliver the edgy, clever, outwit-your-opponent moments that seem to be at the heart of (good) bounty hunters stories.

Indeed, when all is said and done, The Bounty Hunter trilogy chooses to go the EPIC route than that of classic bounty hunter/fringe/frontier story. The climactic scene, while silver-screen worthy, feels more forced than inherent to the Star Wars universe. The Mandalorian television series, for example, does a better job of contextualizing the character—what's presented more 'bounty hunter' than space opera, per se.

Technique-wise, The Bounty Hunter Wars are not often splash, dash, and crash. Action scenes do occur, but the majority of the books' content is spent on in-depth scene building and internal monologue, not exactly the universe's calling cards. While generally the wordsmithing is better than most Star Wars tie-in fiction (at least what little I've read), Jeter's style doesn't fit the medium comfortably. The result is three novels that could have been one novel if all of the spurious (i.e. non-Star Wars-ish material) were boiled down to the bits that make Star Wars, Star Wars.


In the end, the Bounty Hunter Wars trilogy is not the highlight of the Star Wars novel universe, but it certainly isn't a lowlight. (Timothy Zahn's Thrawn trilogy still retains the trophy, I think.) Jeter brings to the table strong writing chops, but it will be up to the reader whether his particular style, which features a lot of internal monologue, is suitable for the universe. Viewers, after all, do not spend a lot of time inside the heads of the characters on screen. There are additional questions about length and plotting choices that will also be up to the individual reader to decide the quality of. Bottom line is, if you can't get enough Star Wars and are interested in more about Boba Fett, then Jeter's Bounty Hunter Wars trilogy offers that. If this is your first Star Wars book experience, I would recommend Zahn; his effort puts Disney's films to shame.