Review of "Distress" by Greg Egan 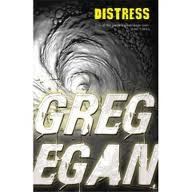 The unique talent that is Greg Egan has written another novel that barely strains the limits of modern technology in a near-future socio-political world that is more than believable.  Cameras  are biologically inserted into humans, rendering reporters as close to the definition of the word “witness” as philologists will permit; pharmaceuticals exist which allow a person to be one button away from a desired mood; and fundamentalists and activists emerge from all corners as science replaces religion in the global mindset.  Distress containing enough ideas for three novels, imagination does not seem to be a problem for Greg Egan.

The main idea tackled in Distress is: what if a Theory of Everything were not only possible but just around the corner?  What effect would this have on society?  In order to examine this scenario, Egan sets his protagonist, the journalist Andrew Worth, to report on things at an international physics symposium that is happening on an anarchic, man made island called Stateless.  Radical anti-science supporters, primitivists, techno-libertarians, and a variety of other realistically portrayed social activist groups have gathered to support or oppose the soon to be announced Theory of Everything.  Worth, after interviewing the world’s leading physicist, Violet Mosala, and learning how close she is to producing something along the lines of Einstein’s Theory, soon becomes involved in a plot by one of the groups to kill the woman, thus keeping the knowledge a secret from humanity.

Political agendas and abuse of media have never played so strong a role in science fiction, and the end result of Worth’s tale is something that can exist only in the imagination.  That into this Egan also mixes elements of post-humanism (there are five types of humans), neuropsychology, bio-pharmaceuticals, as well as the major ethical issues surrounding these technologies, the novel only takes on new levels of poignancy regarding the current state and application of science.  The discussion erupting from the first ten pages alone would be enough to keep a panel of academics talking for hours.

It is unfortunate, therefore, that Egan’s dearth of ideas does not match his literary qualities.  Written in simplistic prose, relaying plot and dialogue in straight-forward fashion, Shakespearians shake their heads at such inelegant usage of English.   But they are missing out on Egan’s commentary regarding a truly globalized world with science as a religion.

Not in the same realm as space opera, Distress is science fiction for the modern world.  It asks big questions, tackles ethical issues, and tries to answer some of its own quandaries.  Failing only in style and having an ending which transcends optimism for euphoria,  Distress is readable for the wealth of imagination alone.  The world Egan imagines today very well could be our world of tomorrow.  (Those who have read and enjoyed Bruce Sterling's Islands in the Net may also enjoy Egan's novel, and vice-versa.)

(This review has also been posted at www.fantasyliterature.com)
Posted by Jesse at 10:22 PM