Review of The Prince of Nothing Trilogy by R. Scott Bakker 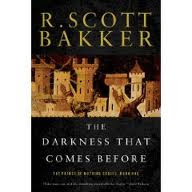 Take the philosophical concept of the original Dune trilogy, sprinkle in some basic plot devices from The Lord of the Rings, and mix with a coherent system of magic, a handful of strong lead characters shaded in gray, wholly original races, cultures, and setting, and voila, you will have R. Scott Bakker’s Prince of Nothing series.  A lucid concoction, the trilogy holds no punches, leaving the reader wide-eyed for its brutal adherence to the realities of pre-industrial life.  No fuzzy hobbits picking flowers and discussing what variety of pipe tobacco they prefer, instead, Machiavellian scheming, ever-inflating egos, and pushes, risks, and clashes to obtain power are unveiled as ugly truths.  Underrated, the Prince of Nothing is one of the best epic fantasy series available today.

Due to the immense scope of Bakker’s world, the series starts slow.  The turns of plot are measured in their reveal, and the scenes set with a view to the whole rather than being simple info dumps.  With patience, as storylines and character arcs build - from the groundwork of The Darkness that Comes Before, the bridge of The Warrior Prophet, to the final showdown of The Thousandfold Thought - readers gain a full understanding of the people, interests, and conditions of Bakker’s Earwa.  Schools and temples of magic war with another below the surface while kings and warriors duke it out for all to see, and all are unsure about the warrior-monk Kellhus's potential.

For those tired of fantasy authors stringing readers along with excellent plot build up only to close the series in a dissatisfying 25 pages, fear not; Bakker delivers.  The ending of the trilogy is conclusive and, most importantly, more grandiose than what one hopes it will be.  Heightening the climax is the involvement and transitory feelings one experiences in their regard for the main characters.  From loved to hated, loathed to pitied, the strong characterization likewise deserves notice for its integration with story.  Much rumination invested in making sure the puzzle pieces fit snugly together (Bakker has taken years to write the series), this is not just another fly-by-the-seat-of-the-pants fantasy series out to cash in on the current market.

Regarding character depiction, many reviewers have been critical of Bakker’s treatment of women.  And, I can understand the view, particularly in today's cultural climate.  It can be said that Bakker was trying to remain true to the times, and ok.  I would simply say that if the poor treatment of women offends you, do not read the series.  There are much worse authors out there, but whether you agree with his view or not, he at least has an agenda behind said scenes.  That for others will be worth hearing out.

The dialogue attentive, action paced constructively, and setting and the main characters having depth, these factors move The Prince of Nothing to vie with the other major works of epic fantasy on the market today.  Pushing it near the top is the focus with which Bakker writes.  From the first page onward, planning and structure are obvious, events falling naturally into place as character motivation dictates, and in turn, allowing the themes of power, paranoia, and virtue to rise to the surface.  Unlike Erikson, who perhaps conceals too much from the reader, or Jordan, who divulges too much, Bakker balances on the tightrope wonderfully, revealing his world in just enough chunks to pull the reader along, while at the same time expressing his literary objectives in a non-proselytizing fashion.  Though reviews of the series are divisive, for scope and content The Prince of Nothing truly deserves to be mentioned in the same breath as Erikson and Martin as the masters of modern fantasy.
Posted by Jesse at 9:28 PM