Ever since reading Charles Darwin’s The Voyage of the Beagle, it has been a dream to visit Tierra del Fuego.  After years of hoping, this year I finally had the chance.  I was disappointed by the fact I couldn’t stay longer.  I’ll start the photos of my trip (which included Chilean and Argentinian Patagonia as well) with Dientes del Navarino and the Beagle Channel in Chilean Tierra del Fuego. 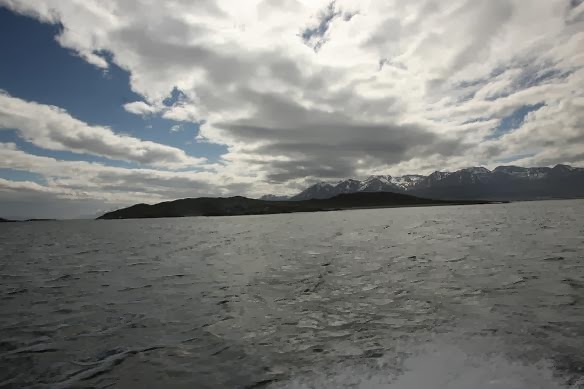 Literally the end of the world (nuts to you Ushuaia), Navarino is possible to access only by boat or plane, no roads from Argentina or Chile yet to reach the remote island.  We opted for pontoon, and above is a photo of us crossing the Beagle Channel from Argentina to Chile. 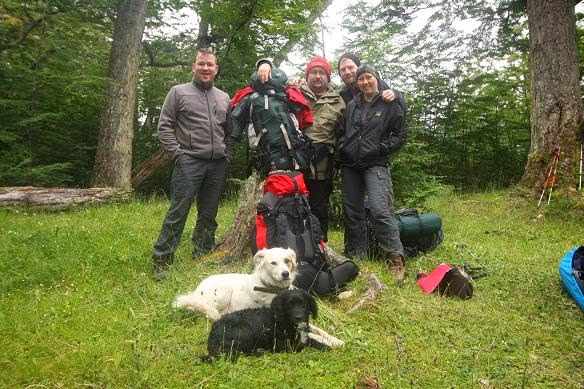 Here is the crew on our first morning of hiking in Dientes del Navarino.  Interesting fact: the two dogs are not part of the crew.  Walking through Puerto Williams on our way to the trailhead, they stopped playing on the streets and tagged along, spending the night beside our campfire.  After taking this photo, we shooed them toward home in case they decided to follow along for the four day hike and their owners wonder where they are.  Otherwise, they would have been great companions! 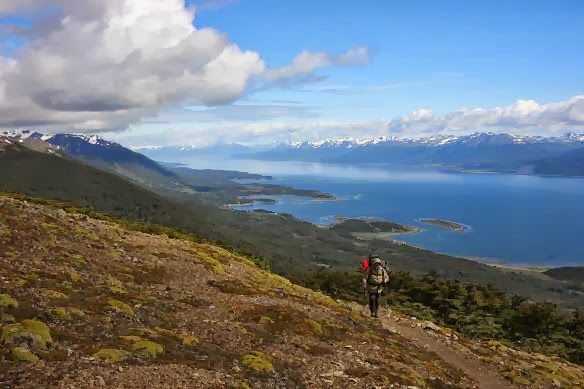 A view of the Beagle Channel from the Dientes del Navarino trail. 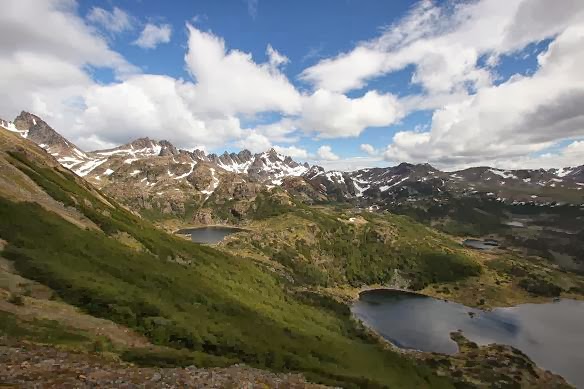 I believe these put the ‘dientes’ in Dientes del Navarino. 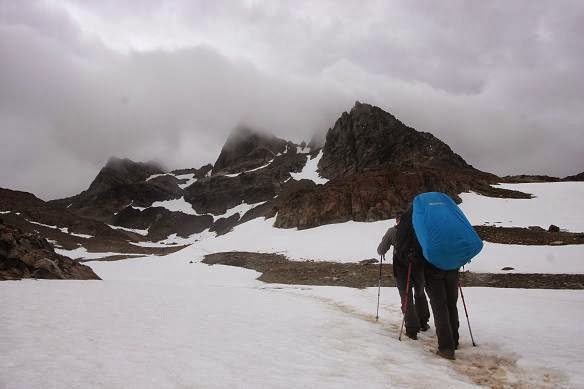 Moving closer to the dientes. 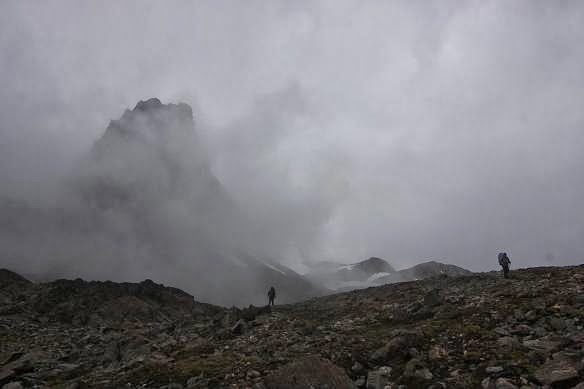 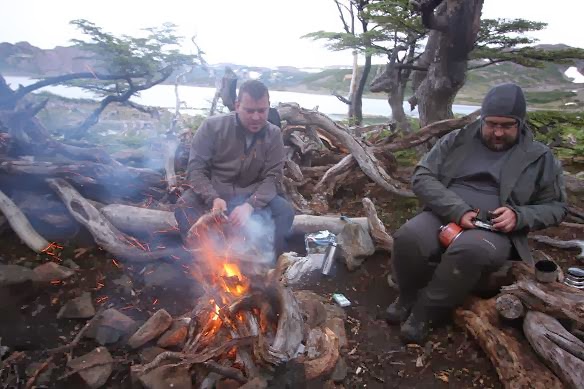 We did a lot of hiking in Argentina and Chile (as you will see), and Dientes del Navarino was the best.  One of the reasons was the sheer lack of tourists.  In Torres del Paine, there was one night we spent “camped” with literally seventy other tents.  The entire time in Dientes del Navarino we saw not one other person.  We were also free to build a fire—something not possible to do at any other of Argentina and Chile’s major national parks.  After the cold rain, it was more than welcome.  Here my brother-in-law and friend get warm. 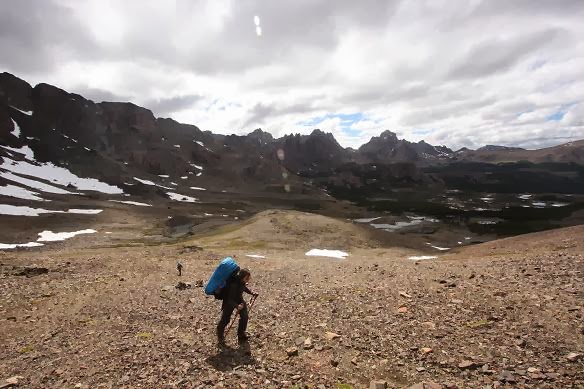 The next day the weather was once again beautiful, the south side of the ‘dientes’ just as beautiful as the north side. 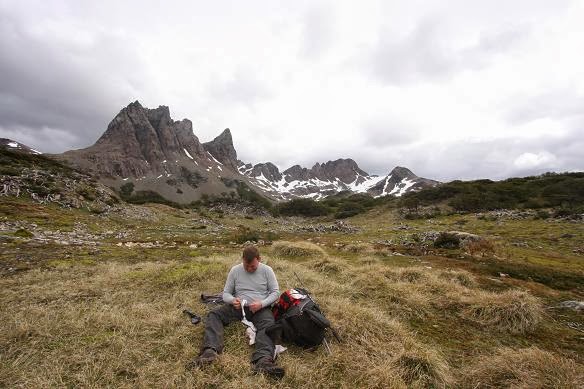 If you’re planning on hiking the Dientes circuit, bring lots of dry socks if your boots are not in good condition.  The ground is very wet, much to my brother-in-law’s shagrin. 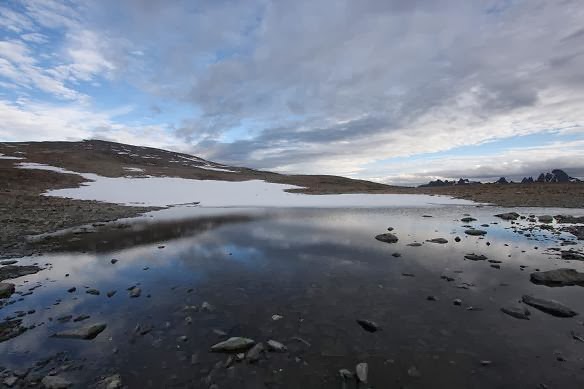 Don’t know what to say… 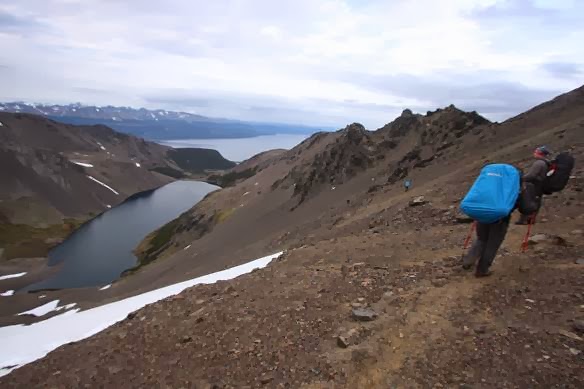 The photo does not do this view justice, suffice to say the reason the two in front of me are hesitant is due to the steepness of the drop and looseness of the stones underfoot.  I don’t know; I had fun surfing down. 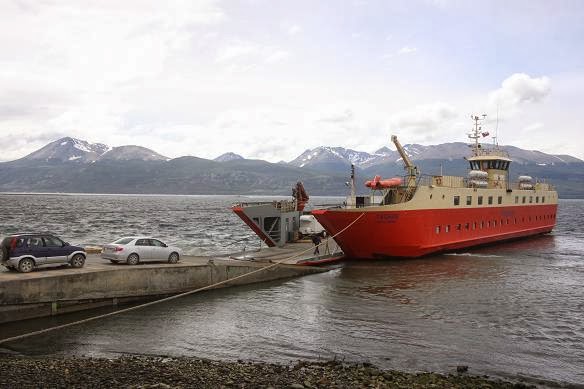 Coming in by boat, we also left by boat.  This ferry waited to take us on a thirty hour ride along the Beagle Channel to Punta Arenas.  It may not look it, but this is the most luxurious ferry I’ve ever ridden.  The food (part of the ticket price) was shit, but the recliner seats were a blessing at night, as were the showers in the morning. 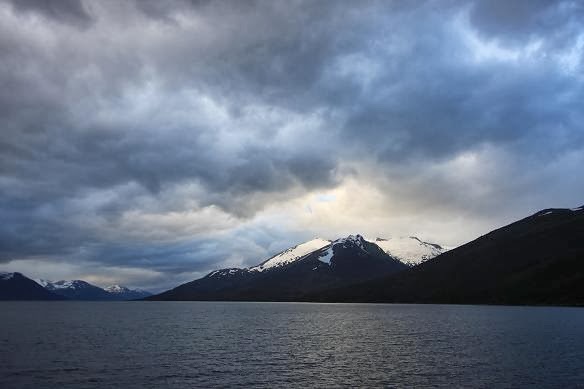 Different strokes for different folks, but for me, the views along the Beagle Channel were fabulous.  It’s difficult to see such interplay of light and land in latitudes closer to the equator. 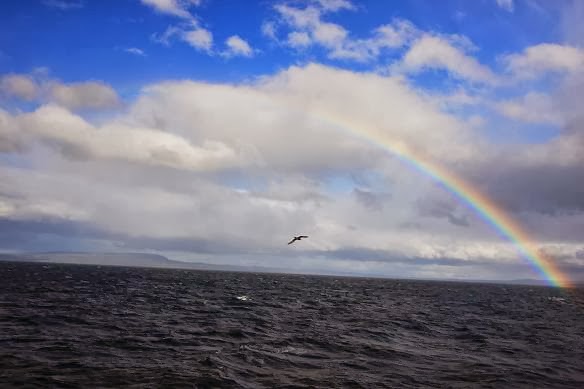 I have come to think of Argentina and Chile as the lands of rainbows.  We saw more than ten rainbows in thirty days.  That’s more than I’ve seen the past five years.  Not photoshopped; the bird just happened along to give us a postcard photo. 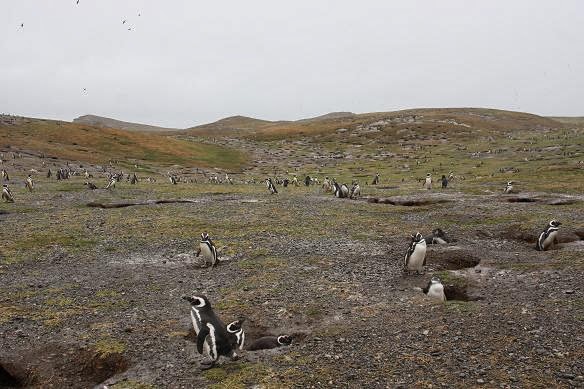 Called literally the Island of Penguins (or Penguin Isle, depending on your preference), a two-hour boat ride from Punta Arenas is this paradise—or ghetto—of penguins.  A national park, it seems it will be theirs for a while longer. 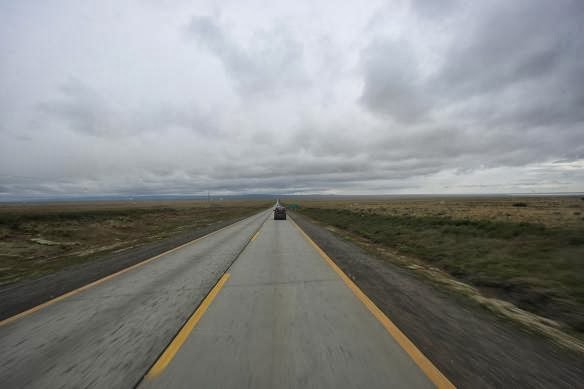 And thus ended our Tierra del Fuego experience in Chile.  After Penguin Paradise, we took a bus to the magnificent (though overly touristed) Torres del Paine in Chilean Patagonia. Photos here.
Posted by Jesse at 9:45 PM