Out of the Phone Booth Dressed in Black: Response to Benjanun Sriduangkaew's Alter Online Ego 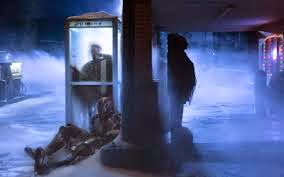 Just what speculative fiction needs, another affair to be magnified ten times larger than it should be.  Case in point: Benjanun Sriduangkaew and the revelation of her alter online egos, Requires Only That You Hate among them.

The short term: certainly the politically correct crowd is going to make a big hullabaloo about the revelation of the person behind Requires That You Hate and her other online personae.  Like a classic novel ending, she was standing among us all the time.  But let’s reflect on a few things.  One, Sriduangkaew could have simply closed down Hate with none the wiser, but instead chose to confess, which, for as much as it pales in comparison to the content that was apologized for, is worth something.  (Vox Day, after all, has yet to make a similar admission.)  Two, we all were young once and made choices and behaved in ways we regret.  Certainly it’s regrettable these mistakes were so public and vehement in Sriduangkaew’s case, but there are uncountable worse acts committed on this Earth every day than venting virulent opinion at fringe corners of the web.  The confrontation of the vitriol via apology seems to mark the beginning of the end of the immaturity.  Three, amongst the profanity and vehemence were some valid points regarding violent sexual behavior and racism in the fiction many genre fans support.  The genre needs to confront some of these issues, even if presented in jagged form, and should not be part of the fallout of this debacle. (And yes, Patrick Rothfuss is an idiot - see here.)  Four, the only reason this is getting the attention it is, is because Sriduangkaew is a writer.  Were the proprietor to have been revealed as Jane Doe, people would ignore it for the relative anonymity, and move on.  This relates to five: Sriduangkaew’s fiction puts its money where her alter ego mouth is.  On top of being dynamic linguistically, it never features those elements she so intensely spoke out about and is, in fact, some of the most unique short work being published in genre these days—not an easy feat to pull off.  And lastly, six: it's obvious Sriduangkaew is dealing with some real mental issues, paranoia, anxiety, the inability to release emotions healthily, egoism, etc. But like the steps of AA, owning up to your problems is the first.  'Hi, my name is Benjanun, and I have a problem.' has been voiced.  But having to stand and face the group of people who will rehash her transgressions in the most dire of tones is not part of the AA program.  Humans being what they, however, this is inevitable.  She did, this, she did that, she is evil, she is unworthy of existence is a kind of punishment and will satisfy some.  But it's not part of the cure; the mental issues appear punishing enough.


Thus in the short term I hope that people will take into account the above points and give Sriduangkaew’s situation more thought than mere reaction.  This is no excuse for the verbal atrocities fired off by her alter egos, but instead a forward view – to look ahead rather than behind.  She admitted wrong, we know some of it was wrong, everyone agrees, time to move on.
The long term: whether one agrees with the outcome or not, Harlan Ellison survived the great breast grab on stage, Hugh Howey made sexist comments that most seem to have forgotten, the image of H.P Lovecraft—the paranoid racist that he was—is on the World Fantasy Award, and Isaac Asimov is revered despite the leering eye he was known to have for the pretty young lasses at conventions.  As long as Sriduangkaew continues to write quality fiction and avoids returning to the dark haunts of Hate and elsewhere, her trespasses will someday too be water under the bridge.  Thus, while I do not believe the admission is by necessity a career wrecker, it depends whether she is now able to channel her energies solely into fiction.  If in time her actions do not match what appears a genuine apology, then by all means she deserves to be crucified in media. But until then, Sriduangkaew's Clark Kent outshines her phone booth disguise for this reviewer, and is worthy of a second chance.  I strongly suspect those she insulted are person enough to move beyond, as well.  The internet crowd, well, that's a different story.   But we will see...
Posted by Jesse at 8:56 PM