Review Look into the Sun by James Patrick Kelly 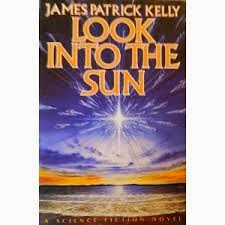 Though known better inside the field than out, James Patrick Kelly remains one of the most dynamic writers of science fiction.  Writing in a range of styles, many of his stories have been nominated and received major genre awards.  But only at short length.  For reasons that entirely escape me, Kelly’s novels, despite being just as engaging as his short work, go virtually unnoticed.  In fact, a couple are fixups or expansions of his short stories.  One of the latter, the novel Look into the Sun is a work that, while not earthshaking or singular to the point of ecstasy, remains a well-written, interesting sci-fi story that has all of the imaginative ingredients of the genre with a personal story of redemption at its core.

Look into the Sun is the story of the troubled architect Phillip Wing.  Just as his greatest design is about to be unveiled, it’s revealed his wife has been cheating.  Coupled with the self-doubt regarding his ability to create real art, Wing falls into a depression of self-loathing, drink becoming his escape.  Meanwhile, on the distant planet Aseneshesh, a humanoid people prepare to send their goddess to death and introduce a new god to oversee their culture and religion.  Aware of the universe beyond via a third alien group called the Messengers, the reigning Asenesheshian goddess Tiagua requests that a human design her tomb, and settles in to wait their arrival.  Wing eventually brought to the planet, not only are his talents as architect put to the test, but likewise his sanity as he attempts to come to terms with the bizarre religion on the planet, physical changes, and what, precisely, are the stakes the Messengers have in the tomb.


Short fiction having trained Kelly to elide spurious material (a lesson many, many writers these days have never learned), the novel moves decidedly, one well-captured scene at a time as Wing and Tiagua, opposed yet similar characters, are revealed and transformed before the reader’s eyes.  The synopsis above may not indicate anything unique about the novel, thus it’s on a scene by scene, detail by detail basis that Kelly captures the imagination and attention, driving towards the story’s strong conclusion.  (The climactic scene is gloriously subtle; as simple as it is, it is still able to capture a true sense of wonder that satisfies immensely.)

And it is a transformation.  Wing the focal point of the story, the manner in which his character confronts and adapts to the situations and events, thoughts and relationships he becomes party to is the pertinent substance of Look into the Sun.  His life on Earth having been dismantled one piece at a time, re-building it into a semblance of something viable for the future is not an easy task.  Aliens and alienation abound, the quest for his own ‘humanity’ is the most affective part of the novel.  (Why ‘humanity’ is in quotes is a teaser the reader can learn more of reading the book.)

Readers familiar with Kelly will be aware the role Catholicism can play in his work, and in Look into the Sun it again appears—as always in veiled, science fictional form.  Tiagua, her hopes for the future, and the history of Aseneshesh religion all speak to the imagery, rote, and materialism of papal theology.  The novel enriched for the indirect inclusion and commentary upon the doctrine, the manner in which the last several chapters rush headlong into deeper revelations related to Wing’s purpose push the excitement, and additionally help resolve his issues in personal, social, and religious areas.

After finishing a book, I generally look online to find reviews to see what other people thought, sometimes a shade or perspective I overlooked becoming apparent.  But with Look into the Sun there simply is not a lot of content available.  There is the usual mindless Amazon commentary“I couldn’t relate to the main character and the alien culture was confusing” and one or two blogs which have taken a short stab at qualifying the novel, but none which were truly insightful.  Having read the novel, I can say it’s worth digging deeper into than just the likability of characters or how esoteric the extraterrestrials are.  Wing is a complex person deeply troubled by the circumstances of his existence, and Aseneshesh has a direct relationship with how his character evolves through the troubles; he is not a Edmond Hamilton or Murray Leinster hero out to save the day on a bizarre alien planet, and nor should the reader expect as such.

In the end, Look into the Sun is a novel that time has largely ignored but undeservedly so.  A work of humanist alien contact, it possesses strong characters and themes and has a storyline that moves stolidly and imaginatively forward, but yet is willing to concede a few major tropes of genre: aliens, FTL travel, and cosmic conspiracy.  The style very much in line with Kelly’s short work, readers who enjoy his novelettes, novellas, etc. will have no problem digging into the author’s longer work, the concepts just as well thought out and presented.  Samuel R.Delany and Ursula Le Guin come immediately to mind as having produced very similar offerings to Look into the Sun—at least Delany’s early work, and for this the novel is in good company.
Posted by Jesse at 9:27 AM