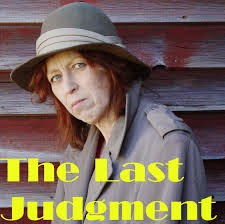 James Patrick Kelly is an important science fiction writer forever deserving of more attention than he receives.  A student of writing, his style covers a wide range, and can be imitative if it wants.  Raymond Chandler among his favorite writers, in 2004 Kelly decided to write an homage in conjunction with an idea in the vein of another favorite writer, James Tiptree Jr.  The novelette “Men Are Trouble” the result, it was such a success for Kelly, both in terms of personal satisfaction and public recognition (i.e. award nominations), he decided to write a follow up, the novella "The Last Judgment" appearing in 2012.  Each story written in high quality prose and digging at gender issues, I’m hoping for a third.

“Men Are Trouble” and "The Last Judgment" are both set on a version of Earth wherein all men have been ‘disappeared’ by an alien group nicknamed the devils.  Chaos following the mass disappearance, women work their way toward societal equilibrium once again, setting up new birthing routines with sperm left over in banks and establishing relationships without men.  Provided bots by the devils, the little metal guys are found in many homes and businesses, answering doors, cooking, and cleaning, to make life easier.  But a great deal of domestic strife and troubled hearts remain.  Suicide is a problem, and some women force themselves to take hormone treatments or have outright sex changes to become men.  But something is still missing in society, a fact indirectly reflected in the fact crime carries on after the crisis.  Enter Fay Hardaway, private eye for hire.


In “Men Are Trouble”, Hardaway is tasked by a grieving mother with investigating the apparent suicide of her daughter.  The investigation leading Hardaway into seedy clubs, an elementary school, a church run by a female Father, local restaurants, and cult members’ homes, she does eventually get to the bottom of the death.  But the mysteries the investigation subsequently creates, and how the devils interfere, well, the reader will have to find out themselves.

In "The Last Judgment," Maud, an elderly woman old enough to have had a daughter the natural way, is missing a valuable painting.  Thing is, she knows who stole it.  Giving Hardaway the contact details, she tasks the private eye with finding her granddaughter, Ann, and discreetly bringing the painting back.  Tracking Ann proves a search for Andy, however.  The mystery only getting deeper from there, the devils, Maud, and Ann’s friends threaten to put an end to Hardaway’s new domestic life.

The pacing of the “Men Are Trouble” and "The Last Judgment" is pitch perfect.  The pinball transition of scenes starts out slow, but slowly gathers momentum, bouncing at angles with ever increased speed into the grand reveal, the ball rattling down the chute to close the game.  Kelly forever keeping things in the ballpark, no deus ex machinae are introduced to tide the climactic moments over, or make up for any shortcomings in plot.  Packing in neither too much or little, the unravel is wonderfully sublime and proves Kelly has mastered the short fiction form.

And style, well, JPK nails it.  Many authors try to imitate Chandler to varying degrees of success, but “Men Are Trouble” and "The Last Judgment" are true homage.  The sardonic asides, the relevant similes, the character types, the atmospheres and moods—everything speaks to Chandler and the mark he left on literature.  Kelly’s writing style one that generally moves with controlled rigor, it’s very interesting to see him settle into a story with such specific intent to be something other, and to such quality.

The backstory of how society came to be all women not the point, Kelly focuses on character and character interaction in the two stories.  And the character pool is comprised of two basic elements: those who adapt, i.e. transition into the new society by taking other women as lovers and wives, and ‘traditionalists’, i.e. those who have sex changes to become men in the physical sense.  Social problems persisting, Hardaway experiences as much personal strife at work as home as a result of the pool.   But as with women, her relationships and dealings with people in public are built on conversations and understanding, rather than cold business or compartmentalized logic.  Her willingness to behave according to circumstance rather than a blanket set of rules that might be at odds with a perceptive, considerate solution is more in line with a female mindset than a male one.  That this feeling out of circumstance and concession to situation features so prominently in the stories’ climaxes only makes the stories stronger representations of the all-female scenario that is at their core.

In the end, “Men Are Trouble” and "The Last Judgment" are precisely what one would think of if asked to imagine Raymond Chandler’s pen writing out a sample from James Tiptree Jr.’s idea box.  Style everything one would expect from the genre master, the concept of an all female society on Earth trying to deal with the situation through sex changes, suicide, and social adaptation is something that could have come straight from Tiptree’s Jr. mind.  Taking the project seriously and obviously knowledgeable of Chandler’s sense of noir, the two stories are some of the best of Kelly’s career.  From the great detective name (Fay Hardaway!) to the pace and movement of story, the sense of style and mood to incorporation of the feminine worldview, they come well recommended.
Posted by Jesse at 8:10 AM