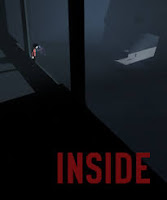 Of the Nintendo generation, I was raised on 2D platformers.  From Super Mario Brothers to Contra, Metroid to Castlevania, such games worked with the limitations of the 8-bit system.   When the Playstation and Nintendo 64 came around and 3D games became a realizable possibility, a new world opened to gamers—for as blocky and clunky as it seemed to be.  But as consoles and computers increased in power, the lack of realism began slipping away.  Today, games like Witcher 3, Metal Gear Solid: Phantom Pain, and Horizon: Zero Dawn present characters and settings just a hair removed from live stage action cinematics.  Why then would a developer utilize such powerful technical potential to go back and create a 2D platformer?  Playdead’s 2016 Inside is the perfect answer.

Building off the style and premise of their earlier Limbo, Inside throws a young boy into another black and white world fraught with puzzles and peril.  But gameplay and theming has significantly matured.  Where Limbo was a procession of puzzles with little to nothing linking the parts, albeit clever, Inside creates cohesion twixt its brainteasers.  Using a common aesthetic, the placement of related background elements, and recurring motifs, the game builds a story that, dare I say, synthesizes into a holistic vision, a vision that asks veiled but poignant questions regarding free will.  More than just a standard 2D puzzler, it’s an experience wherein the individual pieces aggregate into a larger whole that will have the player pondering the thinking, and not just how to solve certain puzzles.

Dark and atmospheric, Inside features a nameless boy traversing a dystopian landscape.  Corn fields to the drab offices of science laboratories, underwater tanks to bizarre weapons testing stations, the boy sees, hears, and experiences a great deal escaping wild dogs and robotic overseers, climbing roof pipes and crawling beneath factory floors, and generally finding his way through the multi-level puzzles.  There are people under the influence of mind control, patrols and guards, people who have been experimented on yet escaped the system somehow, and seemingly normal people who are still part of the system who help or hinder.  The pieces all laid and escalated nicely, indeed existence in modern society brings into strong question the degree to which opinions and choices are our own, or even unique.

A relatively short game (it took me about 3.5 hours to complete), Inside nevertheless offers good play and replay value for the money.  The puzzles are truly unique and gel in such a fashion that when the player finishes, they feel as they have completed something in the grander sense, rather than just a few dozen individual puzzles.  And it is imminently re-playable.  The glowing disco balls hidden throughout the levels entice the player to go through the game again and find all of them to unlock the secret ending, not to mention take a closer look at the setting and backdrop in an attempt to build a stronger theory about gameplay.

The number of 2D platformers on modern consoles is a minority (but growing with the burgeoning of indie gaming), but Inside gives testament that the format, when done right, remains as viable as all the advances of 3D gaming.  In terms of graphics and mechanics, there are innumerable more advanced games.  Yet many, if not most do not offer the same degree of cerebral traction.  This delicious meta-level to the game (puzzle solving as it relates to existentialism) is enough to leave this player extremely satisfied.
Posted by Jesse at 7:57 AM