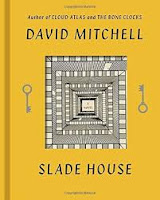 Four years passing between David Mitchell’s 2010 The Thousand Autumns of Jacob de Zoet and 2014’s The Bone Clocks, it’s fair to say the author took his time working on the latter.  With the 2015 publication of Slade House, it’s also fair to say he had some material on the cutting room floor.

A frame narrative, Slade House tells the story of five people who, in some way or another (usually death), get themselves involved with the mysterious, titular abode and the Anchorites (beings who consume people’s souls to remain young) who live there.  The incidences occurring in a nine-year cycle the Anchorites require to keep the ritual alive, the five people’s stories slowly concatenate into a moment that irrevocably changes the future of Slade House forever.


Slade House opening on its most distinct sub-story (Nathan Bishop is perfectly portrayed as an annoying yet lovable young boy), Mitchell slowly moves away from singular plots and characters, and by the end of the novel has arrived in easily recognizable horror/dark fantasy land.  This path, while possessing Mitchell’s strong lingual verve, nevertheless is trodden.  Thematically there is still some air in the tires regarding the larger import of the fight between the Anchorites and the Horologists, but from a purely fictional perspective, this type of story has been written many times before.

In the end, Slade House feels like leftover material from The Bone Clocks—like a major branch of story that was pruned in the early going, then replanted and reworked at a later time.  Though starting out with all the dynamic color Mitchell is renowned for, the book keeps some momentum and interest by changing to new characters, scenes, and times, but ultimately can’t prevent itself from ending on a relatively standard horror-trope sigh.  For readers invested in lore of The Bone Clocks, Slade House should be considered necessary given its complementary nature, not to mention that basically anything Mitchell’s pen touches is thoroughly enjoyable simply from a prose perspective.
Posted by Jesse at 9:25 AM