Review of Bears Discover Fire and Other Stories by Terry Bisson 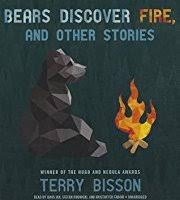 There is the NY Times bestseller list, and then there are the numerous high quality writers plugging away in dark corners, producing what is often more considered, more sophisticated material for quieter applause.  Jonathan Carrol, Maureen McHugh, James Morrow, James Blaylock, John Kessel, Caitlin Kiernan, Kij Johnson, Andy Duncan, Rachel Swirsky—these are writers whose names are known by a few, but who will never achieve bestseller lists without lowering the standards for their work.  Terry Bisson is one of these writers, and his first collection Bears Discover Fire and Other Stories (1993) is a great example why.

The collection opening on the title piece, “Bears Discover Fire” is the elegaic story of an uncle, his nephew, and his old-fashioned mother as they sit around a campfire in the woods.  Portraying the end of America’s Golden Age in anything but obvious terms, it’s intriguing to discover the directness of the title even as the story’s message unfolds allegorically.  Wonderful commentary on so-called ‘literary fiction’ and ‘speculative fiction’ by using the creators themselves, “The Two Janets” hits the proverbial nail on the head in identifying the relationship between the two, and does so using the most obvious elements yet combining them in less than obvious fashion.  The collection contains several dialogue-only stories, of which “They're Made Out of Meat” is the first.  Two aliens discussing the finding of a strange species made of meat on a planet called Earth, the pair have an amusing dialogue before a dose of cold, sober reality grounds the story in human perspective.  Likely the most standard (i.e. plot and character driven) piece in the collection, “Over Flat Mountain” tells of a long haul truck driver and the hitchhiker he picks up crossing the recently uplifted Appalachians.  Now eighteen miles in height, the mountains force transport truckers to don air suits and have specific medicines available for low atmosphere.  They also give need to a certain readiness for evolutionary changes brought about by the rise in elevation…


The second dialogue in Bears Discover Fire, “Press Ann” tells of a couple getting cash from an ATM before going to see a movie when the ATM starts asking strange questions beyond just how much money do you want in strangely Philip K. Dickian fashion…  The oddest story in the collection (and perhaps a nod to R.A. Lafferty?) “The Coon Suit” is about a man driving along a road one day who happens to come across a raccoon hunting competition.  Watching the hunters with their dogs chase the caged animal fascinates him, that is, until the cage comes his way.   While perhaps tugging on the heartstrings a little too hard, “George” remains a story with a positive message every person should take to heart.  About parents who give birth to a boy with wings (named George, natch), the debate what to do with his unlikely appendages quickly comes to a head.  Another dialogue, “Next” tells of an African-American couple attempting to get a marriage license in an America drastically altered by the greenhouse effect.  The sun too strong for white skin, the government has enforced mixed marriages in an effort to increase the melanin count in society, meaning the pair, who are also expecting their first child, meet all kinds of obstacles getting the license.  Very Kafka-esque...

The longest piece in the collection (which isn’t saying a lot) “Necronauts” tells of a blind artist asked to join the strangest project he’s ever been commissioned for.  A rogue scientist having developed the technology to induce death and then revive people, the artist is asked to produce images of the things he “sees” on the other side.  When a woman joins the project, things get interesting.  Resolved ambiguously, the story strikes a human chord.  A real estate developer’s spiel, “Are There Any Questions?” tells of a miraculous new use for trash.  Turned into a malleable yet solid form of terrain, new opportunities for landscapes and suburbs come available. Sounds good, right?  A bizarre little story that may not resolve itself in fully satisfactory fashion, “Two Guys from the Future” tells of a struggling artist and the two men from the future who visit her one evening with an offer.  Working night hours as a security guard at the art gallery she would love to have her work displayed at, the offer is money for a selection of specific paintings that can be taken to the future and thereby saved from an imminent holocaust.  The artist discovering ‘holocaust’ can be relative, it’s a story that moves in unpredictable directions.   Almost a dialogue story (just not quite), “The Toxic Donut” is a light bit of satire commenting on the uncertainty surrounding the amount and degree to which synthesized chemicals have infiltrated human existence, and their NIMBY effect at the personal level.  Perhaps more an idea than a story, “Partial People” acts as an allegorical stand-in for the incomplete manner in which we view, and potentially treat, others.

A wonderful piece of environmental satire, and one of the best in the collection, “Carl's Lawn & Garden” tells of a landscaping crew in a near future where real vegetation is a rarity.  The crew’s skill set beyond botanical and into the technological, maintaining holo-trees and engineered synthetics is wonderfully imagined (the faux-flora are superb).  But where the story real gains momentum is the perpetual tongue-in-cheek Bisson applies to the setting’s environemental standards.  The last bit of the satire, “By Permit Only” is a story that escalates the absurdity surrounding government influence on human activity through the mechanism of permits and permissions.   The collection ending on an unequivocal note, “The Shadow Knows” tells of a retired astronaut called back into service by the discovery of a strange alien form in the Voyager probe when it returns to the solar system.  The alien form not physical, it nevertheless carries a message, one that will touch all humanity.  An interesting story that resolves itself in a fashion nobody could predict.

There is no tight, defined statement that summarizes Bisson’s collection in niche terms.  Only in broad terms—that Bisson is a writer capable of addressing a wide variety of societal issues through subtly precise prose, characterization and sense of ‘story’—can it be summarized.  Each story is crafted in its own right from its own material, and is overlain with some layer of poetry/allegory to gain relevancy, typically drawing all the story’s stings tight in the final paragraph.

In the end, Bears Discover Fire and Other Stories is a very solid collection well worth the read.  With nineteen stories, not every one is a knockout, but there is a quiet, consistent quality to each, not to mention the third option—the non-standard means of resolving a story.  Authorial intelligence hovering below each story but typically not made apparent until the last page or line, the collection is not flashy or commercial, but certainly more sophisticated—rewarding for the reader who likes to look below the surface.  In context, I would peg Bisson as a writer loosely akin to Robert Sheckley.  Each writes stories that possess a defined wit poking at life and the world without bald jokes or obvious winks at the reader.

The following are the nineteen stories collected in Bears Discover Fire and Other Stories:

Bears Discover Fire
The Two Janets
They're Made Out of Meat
Over Flat Mountain
Press Ann
The Coon Suit
George
Next
Necronauts
Are There Any Questions?
Two Guys from the Future
The Toxic Donut
Canción Autentica de Old Earth
Partial People
Carl's Lawn & Garden
The Message
England Underway
By Permit Only
The Shadow Knows
Posted by Jesse at 10:09 AM