Console Corner: Review of The Last of Us DLC "Left Behind" 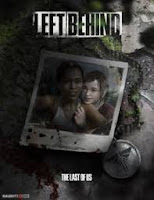 The Last of Us is considered by many one of the greatest games of all time, and by some, the greatest. A powerful cocktail of mature story, beautiful music, tense action, excellent design, and fun, engaging gameplay, it satisfies video gaming’s (unwritten) tenets from every facet. Developer Naughty Dog uncertain of the game until it was released, they were left scrambling to offer DLC content in the wake of its success. How to offer additional, meaningful gameplay to an experience that was already complete? Their answer: a combination backstory and in-story segue focusing on Ellie called “Left Behind” (2014).

Where The Last of Us drives its story in a straight line, “Left Behind” oscillates between two time periods: early-infection Boston and Colorado directly after Joel’s horrific injury at the University. Though very different in appearance, both story parts are set in abandoned shopping malls. In Boston, Ellie and her friend Riley have fun playing in the empty concourses, tinkering with arcade machines, and raiding abandoned shops. In Colorado, Ellie searches among the wreckage and abandoned shops of an outdoor mall, looking for medicine that will prevent Joel’s wound from becoming infected.

Smaller in aim than The Last of Us, “Left Behind” works with building Ellie and Riley’s relationship and the quiet urgency of finding medical supplies for Joel. In Colorado, there are several fight sequences with the Infected and other humans, but these are lo-fi affairs. No Rambo, Ellie generally has a limited amount of weapons and ammo, and thus must also use her head to survive. In the Boston scenes, Naughty Dog focus on dialogue and character, but do spice things up by adding mechanics and aspects not seen in the main game, including arcade games, water gun fights, and some good ol’ fashioned vandalism. Ellie and Riley’s relationship is not developed to the same degree as Joel and Ellie’s (due to length, only), Naughty Dog nevertheless apply the same tight, emotional, and realistic focus telling their story, which makes for a nice counter-point to the action/puzzle sections in Colorado.

This is all a long-winded way of saying “Left Behind” is a worthy expansion that wholly respects and complements the main game while adding a few bits of new flavor for players seeking something more. It would thus be wise for gamers to approach “Left Behind” not as The Last of Us 2, rather as dessert after the main course. There are only about three hours of content, but to be fair, in the context of the 14 hours of The Last of Us means “Left Behind” plays like a major expansion. For people who want to know how Ellie got her wound, “Left Behind” answers this while digging deeper into her backstory and allowing the player to experience the aftermath of the University raid—a connect-the-dots to Ellie hunting in the woods. Is “Left Behind” critical to enjoying and understanding The Last of Us? No, The Last of Us is complete as is. But “Left Behind” is an excellent expansion that anyone who loved the base game will also love.