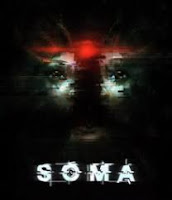 Slightly off-center on the mental spectrum, Philip K. Dick was king of presenting the fuzzy area between reality and perceived reality in his fiction. Drugs, technology, mysticism, brainwashing, or just differences in personal viewpoint (e.g. Are we living in a mass hallucination?) were devices he used to illustrate the difference. All are troubling, but perhaps the scariest is technology. Differences in perception due to drugs, mysticism, brainwashing, etc. we can chalk up to inevitable aspects of being human, even technology to a large degree. But it is technology which has the potential to make permanent, irreversible changes to society’s perceptions. Exploring one technological possibility in what is thus far video gaming’s most intelligent, mature, and existential story is Frictional Games’ 2016 Soma.

At the start of Soma, the player is introduced to Simon Jarret. Recently in an auto accident that killed his girlfriend and left him with brain damage, Jarret has signed up for an experimental brain scan in an attempt to get to the root of the bleeding still plaguing him a month later. Seeming innocuous enough, he arrives at the graduate research clinic on the appointed morning, settles into the dentist-like chair, attaches the head device, and begins the scan…

What happens after is the core of Soma’s gameplay. And given just how amazing the story is, it’s best not to elaborate further. Without spoiling matters, players are forced to find their way through a labyrinth (of sorts) using the tools they find while avoiding the enemies (of sorts) that appear. Vague enough? Along the way, players will continually be thinking: I see and hear my environment, but what is actually going on here? What is the reality beyond this? Am I just dreaming? Is it only a simulation intended to heal my brain in some experimental fashion? Are the graduate students at the clinic just fucking with my head? Have I been transported to another location during the scan? Am I really here? Suffice to say, the slow reveal of the answers to these questions is what makes Soma’s story so damn phenomenal.

I have heard Soma described as ‘survival horror’, which is wrong. Firmly psychological or existential horror, the game plays with our deep-seated understanding of what it means to be human more than it does scare us with overt threats to life and health, i.e. monsters or ghosts. There is without a doubt a horror vibe to gameplay (occasional jump scares and a strong atmospheric unease exploring the dark, unknown depths of the setting). But these elements are intended to complement the larger exploration of what it means to be human, what human consciousness and autonomy are, and how technology could drastically upset that understanding. Yes, very Philip K. Dick (but in fact much more similar in detail to Greg Egan’s Permutation City—oops, spoilery.)

In keeping with Soma’s cerebral edge, nothing about the game is spoon-fed to the player. In order to progress, they must put two and two together based on the objects and terminals, switches and media content they interact with. A very simple example is: players get stuck in a locked room in a medical clinic early in the game. Looking at an open computer terminal they can read through a doctor’s emails, one of which says the passcode to open the nearby door is too important to be written in an email, and that the person who wrote the email will likely put it somewhere less visible for the receiver to find it. After some searching through drawers, closets, and cabinets, the player finds the passcode—not obvious yet not hidden—on a piece of paper. There is no symbol or marker to indicate the paper is the correct one (as many games would do); the player needs to truly look through the papers lying around and in drawers. After, players will need to write down or remember the code (it’s four digits) for the door. Players are not assisted in any way, something I say this with cynicism that most games these days would save the story point—player has achieved passcode—and automatically open the door when you approach it. Getting the balance right, however, at no time does Soma overwhelm with puzzle. Unraveling the game’s story/reality clearly intended to be the focus rather than solving isolated puzzle after puzzle, all of the problems needing to be solved are directly related to the storyline, which makes for a rewarding, integrated experience.

Philip K. Dick or Greg Egan can write novels describing certain perspectives on technological possibilities in the human context, but it remains in the scope of video games to give players the simulation of agency within those technological possibilities. Soma takes full advantage of this potential and delivers in the most impacting way possible. There are two occasions in particular which force the player to have a viewpoint on technology and existence simply not possible in a novel. I will not describe the two occasions (they have more meaning when discovered within the context of the game), but will at least say they are mind-blowing from a story perspective, from the perspective of the questions they force the player to have, and the choice they ultimately offer. It is existentialism2—the true power of video games, realized.

In the end, Soma is a very cerebral game that keeps players on edge for the unknowns lurking in the shadows, as well as the discovery of the unknown of the game’s story/reality. I’m uncertain that the fear-inducing moments are always complementary to story, but the whole remains guided by a mature, intelligent plot that is the most engaging, thought-provoking I’ve played in a video game. (It is also better than a huge swathe of science fiction novels, of which I’ve read hundreds.) Soma hasn’t garnered the attention it deserves due to being an indie game, but is fully deserving of broader acclaim. Kudos to Frictional Games for keeping game standards high.