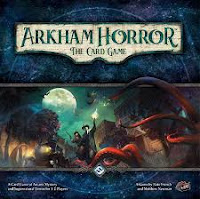 For those in the know, they know this blog is no friend to H.P. Lovecraft. While not openly hostile, there is much indirectly to be said by the lack of Cthulu content among the thousands of reviews of science fiction and fantasy—Lovecraft’s wheelhouse—on this blog. The primary reason is style: the man’s diction is overwrought, and as a result, a grind. The second is substance; of what little I’ve read, most was “common horror”, i.e. dark, arcane things happen to ordinary people.  This doesn't massage my f-spot (fiction spot).  I recognize there are philosophical elements to Lovecraft’s fiction worth digging deeper into (“the unknowable of the great beyond” <queue scary ghost noises>), it’s only that the manner in which these ideas are packaged is a turn off.* But like entering a real house of horrors (versus reading a short story about one), it’s the degree of interaction which has the biggest impact on the Lovecraft experience. Jump scare: Fantasy Flight Game’s Arkham Horror: The Card Game.

A combination of Choose Your Own Adventure and tactical card-playing, Arkham Horror: The Card Game is a game that sees one to two players (up to four if you buy an additional copy) working their way through scenarios, searching for clues, accomplishing objectives, and trying to stay alive fighting monsters. The scenarios strung together to form an overarching campaign, players steadily add powers and abilities to their investigators as they move forward, facing bigger and more evil challenges while solving the larger mystery. RPG-ish, there is a chance players take on permanent trauma and injuries as a consequence of various decisions and story inflection points, making for a tense, seat-of-your-pants adventure through the layers of story. It turns out Lovecraft in the driver’s seat is a different experience than laying on the sofa with a glass of wine.

Before starting a campaign, players select one of the five investigator characters, then choose the thirty cards they think will be of most use searching for clues, fighting monsters, and otherwise staying alive. Five classes of character available, each focuses on specific things. Roland Banks is the tank: he deals and takes a lot of damage, but is not so smart when it comes to searching for clues or very quick when trying to evade enemies. Wendy Adams is a survivor, a young woman who mitigates bad luck by the seat of her pants. Trouble is, the seat of her pants are always close to the fire—or tentacle. Daisy Walker spends her days as a librarian among books, but her nights as an investigator. She uses her immense knowledge to easily find clues, but when attacked doesn’t always have the strongest defense. Agnes Baker is a mystic, a powerful sorceress who requires time to get her implements of magic in order, but once she does is as formidable as the game has to offer fighting the horrors of evil. On the lam, “Skids” O’Toole is a grifter who loves to take risks. When they pay off, they pay off. And when they don’t…

Arkham Horror: The Card Game contains three scenarios that can be played stand-alone, or concatenated into a mini-campaign. Boiling this campaign down to its basic elements leaves the player with little more than the reader has after finishing a Lovecraft short story: common horror—ghouls, mystical doors, cultists, creepies from the great beyond. It’s the interactive elements—with other players and the game’s story and mechanisms—where Lovecraft’s potential is realized, however. That players have agency in the story’s direction is a great motivator for engagement, not to mention a way to easily forgive the bad things that happen to the characters (and they will happen). Like other cooperative board games, it’s possible to say to your playing partner(s): “Well, we messed that up. Let’s play that scenario again and see if we can’t get a better resolution.” But, unlike most other cooperative games, it’s just as possible to say: “Well, we messed that up. But we’re still alive. Let’s see if we can’t keep things going in the next scenario. Maybe things will turn out a little better?” The spirit of narrative fluidity and connection to the characters and events is that strong in this game.

Thus, playing each scenario for the first time is like losing your virginity: it only happens once, and it’s (hopefully) special. Conversely, after you’ve played a scenario once, you can start gaming it. In sexual terms, this likely means more pleasure for the lady, but in Arkham’s terms it means players are not experiencing the story afresh. “We know it’s likely X will happen, so we should do Y.” which is nowhere near as pleasurable as the tension and subsequent excitement around: “What is the game going to throw at us when we turn over the next agenda card?”, then rolling with it. As such, I can’t help but feel most people who replay scenarios do so in order to find the alternate branches of story, something which the game wonderfully makes room for with multiple paths to multiple resolutions to each scenario. Overall, the option is there, which means great replayability.

Like seemingly all Fantasy Flight games, the art on Arkham Horror cards is phenomenal, best-in-class. The hundreds of cards all possessing a unique work (artists credited), each new card you encounter gives pause to appreciate the game’s theming, but likewise the manner in which the name of the card and its ability are represented in art—something that can be either literal or figurative. A truly polished product, a huge amount of time and effort went into making the game from the art aspect, let alone gameplay and story.

The negatives to Arkham Horror are subjective. The first is: if you don’t have loose cash hanging around looking for an excuse to be spent, the game is not for you. As mentioned, Arkham Horror: The Card Game comes with one, three-part campaign and costs $40 USD. Given the branches of story and variety of experiences possible, it can be played numerous times from numerous angles with various combinations of investigators. Providing anywhere from 8-40 hours of atmospheric fun depending on how often you replay the scenarios or campaign, it’s worth the price. However, the moment the player wants to experience virgin narrative beyond the base game, they need to start appraising their financial situation. Expansions cost from $15-35, and are purchased as individual scenarios that chain into eight-part campaigns. While these campaigns provide triple the hours of gameplay, the cost totals $115-$150 per campaign. To imagine there are currently five expansion campaigns available, means a person could spend upwards of $800 dollars if they want to experience everything the game has to offer. Add in all the supplementary material (optional), things like playmats, special accessories, storage solutions, etc., and you’re at a grand. Each of the game’s expansions does possess all of the qualities that make the base game so wonderful, then add aspects and elements that change and enhance the experience in fascinating, super engaging ways, but it does cost.

The second potential drawback is card availability. The base game comes with enough cards to create two decks and play cooperatively two-player. This isn’t without some handwaving, however. Character classes must be combined in order to have the thirty requisite cards to complete a deck. Roland Banks must use cards from Daisy Walker’s card pool. “Skids” O’Toole must borrow from Wendy Adams’. And so on. Not every combination of investigators possible. This isn’t terrible in itself. Players learn about other class’ cards and the game as a whole, which might drive interest in using other investigators. Where the limited number of cards hurts is with character abilities. Agnes Baker, for example, has limited combat potential in her base stats. She does, however, have a powerful card called “Shriveling” which allows her to deal major damage in combat. With only one “Shriveling” card in her thirty card deck, however, the player’s chances of drawing it, and therefore being effective in combat, are limited. There are situations where Agnes is killed relatively quickly in a scenario due to her lack of combat, something that having a second copy of “Shriveling” as an increased possibility to draw would mitigate. But that second copy requires purchasing an additional copy of Arkham Horror: The Card Game. This in itself is also not terrible given it opens the doors for four player play, but again, at the cost of limited card pools if four are playing. All this being said, I have only one copy of the base game, and still find it immensely fun despite the card limitations. Getting sucked into the aforementioned whirlpool of expansions quickly fills out the investigators card pools for choice.

In the end, Arkham Horror: The Card Game is a wonderful balance of narrative-driven action-adventure and tactical/strategic card play. For fans of Lovecraft, recommending the game is a no-brainer: save perhaps video games, there is likely no more immersive Lovecraft experience available. But non-fans should likewise take a look. The overwrought diction and (relative) cheesiness of Lovecraft’s fiction is assuaged by the player’s agency in how events play out. The escalating plight of the characters through the horrors of the unknown is participatory rather than observatory, which makes a huge difference to the experience. The art is superb. Add to this the personal, strategic aspect of building a deck of thirty cards you think will be most successful investigating the arcane, and you’ve got a recipe for a wonderful one or two hours of gaming tonight. If one night becomes two, which becomes three, which becomes eighty-seven, however, things will start to get expensive… the horrors of capitalism loom.

*Note: I’ve read that Lovecraft’s fiction is racially problematic. But I do not know enough to criticize further, except to say two things:

1. If it does exist, it’s another turn off for his fiction.

2. Arkham Horror: The Card Game is one of the most diverse board game I’ve ever played. Taking into consideration all of the investigators players can choose from, there is nothing to criticize. Male, female, white, black, Asian, indigenous—characters from all walks of life, rich to poor, young to old, hero to villain, inhabit the game. And diversity among the monsters, well… black tentacled and white, haunting and biting, corporeal and non-, and the list goes on. I joke, but you can’t accuse the game of aligning with any unfounded biases Lovecraft may have had.