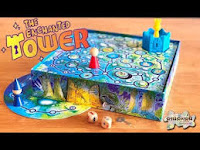 Perhaps someday I’ll wax on about all the wonderful, human aspects of board games. The healthy social interaction, the brain exercise, the fun, the imagination, the tactile experience—waxing! They’re good in many ways, and I would argue most especially for children. Granted, some games offer limited forms of brain exercise: roll the dice, obey the dice, move the piece, roll the dice... Such games may actually be a detriment, in fact. But at the same time, many adult games—adult in the intellectual sense, har har—are too difficult for wee ones. Thus, children’s board games that exercise the mind and are fun for adults are a blessing. Enter The Enchanted Tower.

Using a classic fairy tale motif, The Enchanted Tower sees a hero and a sorcerer racing toward a hidden key, trying to rescue or capture, respectively, a princess locked in a tower. The hero closes their eyes while the sorcerer hides the key in one of the many holes. Players then take turns rolling unique dice to move around the board and find the key. As the sorcerer knows where the key is, the hero is given a head start for searching. The player who finds the key first, however, does not automatically win. There are six keyholes in the tower that players must test to find the one that frees the princess, meaning it’s likely more races—and more suspense—await.

Beyond just fun gameplay, The Enchanted Tower is a wonderfully tactile, 3D experience. Hidden beneath cardboard tokens on forest paths, the metal key is found by magnets under the hero and sorcerer as they pass over. And the princess’ tower is spring loaded. Inserting the key into the right keyhole sends her shooting into the air. The princess and the tower needed to be plastic for mechanical reasons, which is understandable, but the remainder of the game is wood and cardboard, including solid meeples and dice, which feel right.

The Enchanted Tower is at heart a memory game, which means my kids stand more than a fair chance against ageing, old dad. No need for parents to put the brakes on playing, children can straight-up, honestly beat you, which is a huge amount of fun for them. Another immensely fun thing is that there is no need to have fixed roles. Between rounds, players can switch between the hero and sorcerer, one closing their eyes while the other hides the key, and vice versa. All that matters is who gets to the key first to have a chance to rescue the princess. And lastly, beyond just rolling dice and moving, there is a mild-bluffing element to the game. As the sorcerer knows where the key is, they can lead the hero on a small goose-chase—zigging when they should zag to throw off the hero. And of course, when even the sorcerer forgets where the key is, all bets are off!

If there is a limitation to the game, it would be player count. I have played with myself and two small kids, and while it can be made to work, it is not ideal. With my three-year old, I wonder if it gives her the full sense of satisfaction or confidence of having done something herself. On the other hand, my children had to compromise on each turn playing as the hero, deciding which path for him to take. Overall, games are so quick, however, that the attention span of any small child can absorb the short break while their brother or sister plays. And of course, once both children are old enough, they can manage themselves.

In the end, The Enchanted Tower is one of my children’s absolute favorite games. The joy of hiding something from dad, and watching as he bumbles his way around the board trying to find it gives them great pleasure, particularly if they get to the key first. The suspense of trying the key in a keyhole to see if it’s the one which frees the princess is great, and subsequently so too is the joy of choosing the right keyhole and seeing her spring into the air. The pieces and board are all wonderfully and sturdily made—the designer even including a spare key, knowing that with small children about, such things easily get lost. Highly recommended.