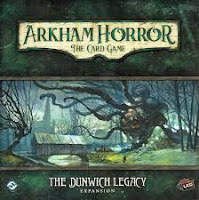 Note: This review covers the deluxe expansion The Dunwich Legacy, as well as the six Mythos packs which complete the campaign, but will not contain any spoilers save the roots of story which introduce the campaign as a whole. All cards and scenario details will be untouched.

This is it—the portal, the nap beside the river that leads down the rabbit hole, the slip into another dimension—where disposable assets, otherwise known as dollars, hopefully exist. If you’re reading this, it’s likely the Arkham Horror: The Card Game base game has scratched an itch, but not hard enough. It still itches, and you’re looking for a better way to scratch it. The Dunwich Legacy deluxe expansion, and the six mythos packs which complete the campaign, may be just the sharp edge you’re looking for.

“The Dunwich Legacy” is the first Arkham Horror campaign released after the base game. It starts with players investigating what seems a relatively ordinary occurrence: two professors from Miskatonic University have disappeared. Going to the University, investigators question Dr. Armitage to learn more. One professor last seen around the university’s academic building and the other at a local speak-easy, players then have a choice which they’d like to locate first, and the adventure begins. It perhaps goes without saying that, what at first seems “a relatively ordinary occurrence” slowly escalates into a situation anything-but. The investigators’ health and sanity tested to the max with each new scenario, it comes down to the wire—cosmic wire?—if they will survive the horrors they discover. Small towns, it seems, old big secrets (but not in any David Lynch sort of way). 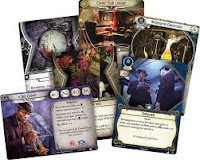 As with any episodic content, the question on potential consumers’ minds is: how does this release compare to what I am familiar with? In the case of “The Dunwich Legacy” campaign, the answer is highly favorably. While the base-game scenarios are a solid sample of game play that accomplish what they set out to do, they are nevertheless short in length. A mini-campaign in fact, the three scenarios give players the opportunity to decide if the flavor suits their palette—an appetizer. “The Dunwich Legacy” is the full meal. It delivers on the promise of the “Night of the Zealot” in a way that utilizes the game’s concepts and mechanisms while showing how they can be used in more various and interesting ways. Thus the overarching narrative, once the final mythos pack “Lost in Space and Time” has been played to completion, will strike different players with different levels of authenticity. But it’s the manner in which the mechanisms are used in fresh and fun ways in each mythos pack that will likely leave the strongest mark from the campaign. Without spoiling matters, the train, the kidnappings, what you find in the cellar—all are manifested in simple but thematically clever ways that eliminate any assumption the game is repetitive.

As with all campaigns released thus far, “The Dunwich Legacy” brings to the table five new investigators, giving players the choice of carrying on with an investigator from the base game, or trying their luck with a new one. The drifter “Ashcan” Pete and his trusty hound Duke play as survivors, trying to get by on the seat of their pants. Jenny Barnes is a pistol-slinging daredevil who trusts her luck to succeed, and we know the ways that goes. Jim Culver is a jazz musician for whom voodoo magic comes as easily as it goes. Zoey Samsara is a mad chef who loses control when she starts a fight, for better and worse. And lastly is Rex Murphy, a clue-hoovering reporter who makes short work of investigating but struggles mightily in a fight. Some investigators better paired, and others doing well regardless, players will likely find someone new that suits their tastes to tackle the new challenges.

While some of the later campaigns may be more satisfying from a narrative or thematic perspective, “The Dunwich Legacy” is an excellent place to carry on from the base game. It showcases, in eight-part regalia, the larger potential. If building a good deck of investigator cards to tackle any campaign is your goal, however, then Dunwich is the best place to start given the bevy of powerful player cards that come available with each Mythos Pack, and are henceforth available for use in any other campaign. I didn’t go into detail in this review in order to avoid spoilers, suffice to say the slow but steady flow of new abilities unlocked by these cards gives the player a growing sense of power and strength, even as their health and sanity take a beating. Down the rabbit hole we go…

Blood on the Altar (mythos pack)

All of the eight scenarios in “The Dunwich Legacy” are good, a couple even great. If I had to order them (you know, the whole gun to the head thing…), I’d put them in the following order, best to almost best: