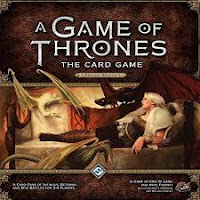 I am one of those crazy people waiting for George R.R. Martin to finish his A Song of Ice and Fire book series before watching the tv series Game of Thrones. While the two most recently published books have cut my confidence Martin is able to finish the series in as strong a fashion as it began, I hold out. But that doesn’t mean I can’t enjoy other Game of Thrones content, and that includes Fantasy Flight Games’ living card game second edition.

A Game of Thrones: The Card Game is a card-driven strategy/combat game, or, as can so romantically be expressed: dudes on a table. Players take turns marshaling their characters and assets, afterwards turning them loose in various forms, including espionage, power, and direct combat, all in an attempt gain power. The first player to earn fifteen power, wins. Interestingly, the game can also be played with three or four players and be just as viable, something relatively unique in the world of card-dudes on a table.

In terms of gameplay, AGoT 2ed is relatively straight forward: play your characters, fight, remove the fallen, and do it again. Where the game earns points (har har) is the manner in which it manifests George R.R. Martin’s world. The houses of Stark, Lannister, Barratheon, etc. are all represented wonderfully. Lannisters depend on money for their power, which is a two-edged sword; deprive them of their money, and their chances of success dry up, but at the same time they can pay mercenaries to enter battle where no other house can. The Starks gain power from one another—the more on the table the more formidable they are. The Watchers on the Wall, well, they gain power through defense—which makes sense. Eight houses in all (if you include the Watchers), the warring factions of the books get wonderful car game recognition. 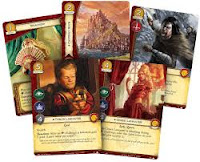 A Game of Thrones: The Card Game is a living card game, which means that more than just the contents of the base box are available for purchase, significantly more. This is mostly a negative aspect (whereas this is a positive aspect to Arkham Horror the living card game). Foremost, there simply isn’t enough in the core box to produce a competitive/enjoyable game. While technically possible, it produces such out-of-balance games that it feels more often than not one player is simply unable to draw the cards they need to compete. Said card draw is significantly ameliorated by the purchase of an additional core set, and made balanced with the purchase of a third. And all that ignores the dozens upon dozens of expansions that are available, each adding more and more powerful cards to the pool. For the uninitiated, this means that if you pit your deck of core-only cards against someone who has cherry picked all the good cards from the numerous expansions, you stand no chance. They will demolish you, which isn't much fun. Pitting decks created from equal pools of cards, however, is fun—fun of a dynamic yet tactical variety that really brings the books to life.

I have played a number of living cards games, and Got LCG 2.0 is one of the worst offenders. Playing in a competitive environment without the latest cards will very likely result in a loss. Similar games, such as Android: Netrunner or Warhammer Conquest, have done this aspect better—not perfectly, but better. It can be very frustrating to play against someone who has access to cards you don't, and get destroyed as a result. No middle ground, the player either gets their feet wet to enjoy the casual experience, or dives in head first to get everything they need to be successful on the tournament scene.

I have not played the first edition of A Game of Thrones: The Card Game, and therefore cannot comment on how the second compares. What I can say is that second edition does an excellent job implementing the theme of the books. The houses, and the popular characters who inhabit them, all play like as described in George R.R. Martin’s. Want to be Jaime or Tyrion Lannister, ok. Wanto to be the Mountain or the Hound, ok. Want to be the dragon queen, Danaerys herself—or the dragons, ok. Want to be Ned Stark as he takes on the Barratheons, ok. I’ve read people praising the manner in which The Game of Thrones board game emulates the politics (or lack thereof) from the books, thus, it’s difficult not to compliment the card game for capturing the manner in which characters go head to head in the books, death a real thing. Be warned, however, that there are only two ways to play: casual with a couple of copies of the game, or all in, investing in the game’s multitude of expansions. And the power creep, well...