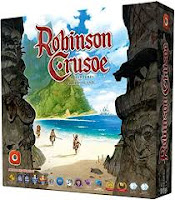 Regardless books, video games, or otherwise, I try on this blog to review things for what they are—not precisely in isolation, but preferably not side by side in versus mode. But with Robinson Crusoe: Adventures on a Cursed Island, I find the task difficult. You see, Arkham Horror: The Card Game has killed Robinson Crusoe for me. The games were left on an island, attacked by creatures, and only one survived. To solve this, the only thing I can think to do for this review is to look at Robinson Crusoe, birth to death.

Sustained internet buzz and an interesting premise were the primary reasons I bought Robinson Crusoe. The game has been routinely cited by many as one of their favorites, and the idea of getting through various scenarios cooperatively while telling your own story on a deserted island seemed worthwhile. And indeed, after getting over the massive rulebook hump, there was some fun to be had.

In juggling the tasks while trying to stay ahead of the curve that constantly threatens to slide you off the island, my wife and I enjoyed our games. Collecting supplies, feeding people, building shelter, fending off wild animals, surviving the weather—it’s a true challenge that does a good job of evoking theme and gives a real sense of satisfaction and teamwork when successful.

But after that initial wave of gameplay, the game never made it back to our table. And years passed. And we bought Arkham Horror: The Card Game. More time passed. We had children. One day, my son asked: “What’s that, dad?” pointing at Robinson Crusoe, to which I replied: “Wanna try?” Opening the box and cracking the rulebook I immediately thought: “Holy @#$%, this game is all over the place.” This marker tracks this, this thingy tracks that, there’s a place here for that, not that. These cards look like beast cards, but they’re not, so don’t put them on the beast symbol. Put this on the board, unless you have X or Y. Choose a scenario, which will have its own set of additional rules... I sometimes hear board games described as “fiddly.” I now imagine Robinson Crusoe as the poster child.

I tried to set up a game with my son, but we eventually gave up. “I need 45 minutes to set this up and learn the rules, again.” was not welcome news to my 6 year old. It’s then I realized the similarities between Robinson and Arkham. Both at heart are survival games, which I asked myself: “Why does Arkham come back to our table time and again while Robinson collects dust?”* And the answer I came to is twofold: 1) the gameplay of Arkham is more streamlined, making things like setup simpler, and 2) Arkham delivers on a narrative experience in a way Robinson would like but can’t given how bogged down by game mechanisms it is. Add to this the bevy of customizable, upgradeable characters in Arkham (Robinson gives you an uncustomizable, non-upgradable choice of four), and the viability of Arkham becomes clear. Thus, while I generally like the idea that games which have a stronger barrier to entry prove more gratifying in the long term, I do not find it the case with Robinson.

I’ve come to the conclusion that Robinson Crusoe is one of those games, like Agricola, which tries to map reality to game rather than game to reality. In the design process, the creator attempted to implement the various aspects of island survival through mechanisms, brute forcing them together into an engine of semi-interlocking parts. For the right audience these types of games are fun; that’s clear based on its popularity. But for me, Robinson’s engine is never allowed to run full throttle. More like a broken engine, players spend all their time coddling and maintaining it, jumping to each new leak or crack that appears rather than experiencing the joy of putting the pedal to the metal. Arkham Horror, while never allowing you to go full throttle either, nevertheless allows players to feel the wind in their hair—to see a nice combo of cards easily deal with the latest exigency tossed their way, or to revel in quiet joy at the synergy of efficiency in a particular card tableau. And story. Robinson Crusoe musters something in the area of narrative each game, but feels more puzzle-y than anything. Arkham Horror fully integrates narrative, giving players a balanced story and gameplay experience in a fresh way each scenario. Another way of looking at this is, where Arkham created a relatively simplistic set of base rules, rules simplistic enough to be added to in myriad, fun ways for each future scenario, Robinson created a complex set of base rules, then tried to adapt a variety of scenarios to them. If Arkham is a swiss army knife, then Robinson is trying to fit a bunch of swiss army knives into a small box with all their tools extended. RIP Robinson Crusoe.

*For the record, Robinson Crusoe is a game entirely suitable for small children, where Arkham Horror is not (due to graphic art).