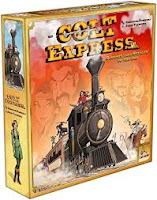 For those so inclined, there are board games which feature endless pages of rules. Tediously complex, such games capture the interest of deep, multi-layered thinkers, people who like to sit quietly around the table, strategizing, min-maxing, and sweating out the best move. Then there is Colt Express.

BAM! CRASH! POW! In the best, cartoonish sense, Colt Express sees players taking on the role of bandits robbing a train, fighting each other and the marshal to see who gets the most loot. An action-programming game, players take turns playing cards from their hands until a number of turns have been taken (varies, depending on the round card), and once completed, the cards are revealed one by one and the actions on them taken. Go up to the roof of the carriage, punch a bandit, move ahead, grab some loot, shoot a bandit, swing and miss, run into the marshal and get knocked to the roof—on the surface it seems beautiful chaos. Bam! Crash! Pow! Thus, for as much as you can see what action cards other players are playing and react accordingly, there is still that wonderful, fun-inducing element of chaos when you forget or make a wrong move that throws a wrench in the works in the most delightfully fun of ways. Another way of saying this is, if you are a person who sours seeing your best laid plans destroyed, don’t buy Colt Express. Your dreams will certainly be destroyed once, if not more often, a game. If, however, you see the comedy and fun in knocking you and a couple friends or family around a train as you desperately try to grab bags of money and jewels, then this is a game for you.

Indeed, there are some who will extremely dislike the seemingly random elements of Colt Express. It is entirely possible the sequence of cards you played that would net you three diamonds in a vacuum of gameplay is pushed in a new direction that finds you netting three fistfuls of air and three bullets in the back in reality. But as a veteran player, I can say that while there is an element of luck/randomness to the game, it’s something that can most often be mitigated by smart play. This is by no means chess, where every possible move is known, but by the same token (har har) not everything is in the hands of fate. Between those two poles lies the game’s magic and fun. BAM! POW! ZAP!

The art of Colt Express wonderfully captures this gameplay. The colors vibrant and the characters rendered in cartoonish form, that might have been enough for a lot of games. But the 3D cardboard train, front and center on the table, on which all of the action takes place, really sets the game apart (standee cactuses, armadillos, etc. included for atmosphere). While the train isn’t made for fat fingers (an extremely mild quibble, and something having children ameliorates), seeing it on the table instead of a board really brings the experience to life. Every punch, shot, and leap springs more easily to the imagination as the bandits clamber and tussle with each other through the carriages and around the marshal. In other words, don’t get caught flat footed admiring it…

I would like to take a moment to reflect back on a brief editorial I did reviewing Flamme Rouge, another game which tries to capture an element of history in game form. In said editorial, I defended the designer’s right to skew from the modern expectation for ethnic and gender diversity in a game’s characters in order to be historically representative, and therefore more atmospheric and engaging. In Colt Express, designers reserved historical representation for elements of setting but took the characters in the modern direction of diversity. Suitably, the art was made to be more cartoonish in style (i.e. abstracting it from the reality of the history it is attempting to represent). The player (I hope) can easily see the complementary effect this has on the uproarious, mercurial nature of Colt Express’ gameplay. Had the art been edgy and realistic, the game’s style would be less compatible, and character diversity wouldn’t feel 100% proper. After all, how many bandit groups in the mountains of Colorado had token representation of race and gender? Probably few, if any. This is all a long way of saying, diversity in gaming is not a black and white, auto-include. There are other factors to consider which contribute to the holistic experience of the game that might warrant excluding diversity without sacrificing integrity, as in the case of Flamme Rouge. In Colt Express, the factors align to provide an excellent opportunity that the designers took full advantage of, making for a better, more diverse experience.

Colt Express is one of the tip-top family games we own. Whatever the age range on the box says, it probably doesn’t matter. Our five-year old son plays—not with any deep strategy in mind; he just plays what he feels. This adds an element of chaos to the game that works in his favor just enough times to grant a little success, and more than anything adds to the fun our whole family has. It’s almost impossible not to laugh when someone’s intentions of picking up a valuable diamond are thwarted by a properly played punch that knocks them into the next car where no jewels lie. The best part is, the person left grasping at air knows that some time very soon the same fate will play out for another person, perhaps even in the next card. There are serious games. And there are seriously fun games.