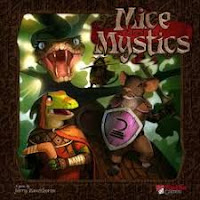 Note: You need the base game Mice & Mystics to play its expansion Downwood Tales.

Mice & Mystics is a game beloved by thousands and thousands of families. Reprinted numerous times in its lifetime, the game goes in and out of stock as more people discover it. But for as charismatic as the heroes are, for as satisfying as the overarching story is, and for as wonderful as the production is, it is not a perfect gaming experience. Playing M&M for an extended period makes it apparent that the minion encounters are repetitive; they detract from rather than contribute to the unique experience each chapter brings. The second expansion to Mice & Mystics, called Downwood Tales, fixes this aspect, then heaps on a whole lot more.

Downwood Tales, like the base game and the first expansion Heart of Glorm, introduces a new, full-length story. Going outside the castle, there are ten new, double-sided terrain tiles the story happens on. And it adds another storey—emphasis on spelling—as well. Trees introduced, the story takes players into the leaftops along with more adventures above and below ground. To go on this new adventure alongside Colin, Tilda, Nez, Filch, Lily, and Maginos, three new heroes are introduced: Jakobe the gecko, Ansel the mouse, and Ditty the shrew. Facing off against them are a slew of new minions, big and small. Frogs and bullfrogs, phearies and newts, weasels and rats—there are more than different types of rats to defeat. Add to these dominant aspects of the game a chunky, new set of ability cards to spend your cheese on, and tall stack of skill cards to find new all weapons, armor, spells, etc., and a number of other token specific elements related to the various chapter components round out this massive package of goodness. 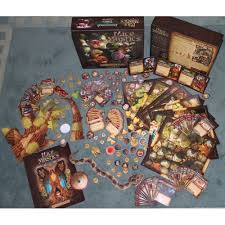 But the infusion of content is not necessarily enough to save the major problem with Mice & Mystics the base game. Even more TLC was needed to resolve the problem of repetitive minion encounters. Thankfully, designers put in the effort. The chapters now feature a bevy of one-off scenarios that complement story. Rather than each chapter being a string of minion encounters, players don’t know what to expect given the significant number of tiles now feature specific goals or alternate objectives beyond “defeat all minions”. For example, there is one moment wherein the heroes infiltrate a lair of bad guys with the goal of getting informagtion. Rather than being tasked with defeating the minions to get this—the standard M&M approach, Downwood Tales instead provides players a series of simple if/then scenarios that align wonderfully with the objective. Moreover, the results of this tile chain into the next. What players encounter in the next tile will be impacted by what they were able to accomplish in the minion’s lair. Wonderful. This is the role-playing experience a lot of people were looking for.

In the end, I can’t help but feel Downwood Tales is the game Mice & Mystics was meant to be. Nothing can replace the level of entrenchment the original game’s heroes take in players’ minds (Nez! Nez! Nez! my son says), but the level of variety now available in the game—the uniqueness of each chapter even tile—makes for a more enjoyable, less repetitive experience that breathes full life into the game. Recommending Downwood Tales thus becomes a no brainer. If you liked Mice & Mystics, it’s likely you will love Downwood Tales all the more.