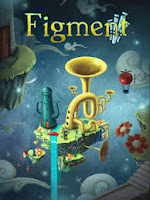 If a video game can be likened to a kitchen, then there are a finite number of ingredients which can be combined, in various proportions, to make a near infinite variety of foods. After all, flour and egg alone can produce a number of unique dishes. At the risk of being wholly cliché, the same is true with video games. Graphics, sound, gameplay, etc. are ingredients each designer decides how to combine, and in what proportions. Bedtime Digital Game’s Figment (2017) would therefore be crème brulee with raspberry sauce—quick, sweet, and tasty.

Figment’s prologue features a family riding in a car, when suddenly there is an accident. The events not directly seen, players are given a first-person view to only the auditory aspects of the conversation leading up to the crash from the perspective of the child riding in the backseat. After, the game proper kicks off. Dropped into a strange cartoon land, players quickly realize they are inside the mind of the child as they fight for consciousness. Taking on the role of Dusty and his faithful sidekick Piper, the player then puzzles, and occasionally fights, their way through the cobwebs of the unconscious, trying to wake up.

80% puzzle-platformer, 20% action, and 100% delightful, Figment is a +/-5 hour, 1-player experience. Featuring wonderful art, levels with complementary motifs, and an intuitive interface, players will spend most of their time toing and froing, pulling this lever, pushing that button, collecting that object, and so on, making their way through the cartoonish layers of the metaphorical subconscious. Though adults will definitely find a challenge, it’s not the most brain-busting puzzler on the market. But for kids, however, it certainly will be brain-busting—and satisfying when figuring one’s way through a puzzle.

And thus while Figment is wholly enjoyable for adults, I would argue the target audience is actually older children and young adults—people who might be dealing with basic fears and finding courage to face life’s problems, and find something relatable in Dusty and Piper’s trip through the surreal mind. Swinging Dusty’s wooden sword to take down spiders and weasels breaks up the monotony of puzzle after puzzle, just as figuring out how to take down the three bosses provides an extra challenge that combines everything the player has learned in the level. The fighting controls are a little bit wonky at times, but the puzzles are wonderful.

No review of Figment would be complete without discussing the music. Multi-layered, pleasant, and charming as a soundtrack, add to this the fact instruments and puzzles involving music are built into the game it becomes a clear music is meant to be part of the theme of finding courage and facing fears. Positive energy for positive exercise of the mind, the game portrays music as part of not only a subtle aspect the healing, but also a learning means which helps build confidence in one area of life to combat other areas where a person is less confident. I’m not sure how true this rings psychologically, but it sounds nice (no pun intended), and regardless grounded in theory or not, does provide an energy to the game and gameplay that not many other games capture.

For the record, Figment is appropriate for children. There is the rare use of the words ‘damn’ or ‘bastard’, but for parents who don’t get hung up on such trivial matters, it’s perfectly playable by older children and young adults. More importantly, if one feels that the development of lateral thinking is good, then the game is wholly educational. But not too young children. The puzzles often providing a challenge even for adults, young people will undoubtedly need to stretch their space-time minds.

In the end, Figment is not a game-of-the-generation contender. That wasn’t its goal. Its goal was to make a unique puzzle-platformer meant to empower the player to think about their real-world challenges in more confident fashion, the delightful music buoying their journey. Warm, heartfelt, and surreal (yes, that is a combination), players experience the colorful joy of the game’s graphics and sound through the eyes of Dusty as he figures and fights his way through fears and back to his family.