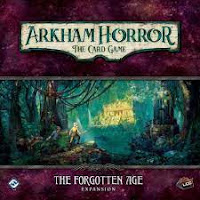 Note: This review covers the deluxe expansion The Forgotten Age, as well as the six Mythos packs which complete the campaign. It will not contain any spoilers save the roots of story which introduce the campaign as a whole. All other card, scenario, and story details will be untouched.

You’ve done it. You’ve made it this far. Umordhoth did not kill you (at least the last, successful attempt did not compared to the thirty-seven unsuccessful prior…). You survived the brood of Yog-Sothoth through time and space. You held on to your sanity tracking/being tracked by the Yellow King. Now you’re ready for a new challenge in the Arkham Horrror the Card Game universe. Well, if there were any disagreement about the definition of “challenge” beforehand, the game’s third campaign, “The Forgotten Age,” looks to ensure everyone now has a higher standard.

Fully embracing the fantastical fun of an Indiana Jones/Tomb Raider-esque expedition through the jungles of Central America, “The Forgotten Age” sees players answering the call of an eccentric historian who believes that an untouched Aztec city-state still exists in the wilds of Mexico. With grant money from Miskatonic University, he organizes an expedition, on which you and potentially one to three other people can go to see if indeed there are still mysterious wonders in the world to be discovered. Arkham Horror being Arkham Horror, the answer is of course ‘yes’, the only question being: How deadly is it? (Answer: the deadliest yet.)

The campaigns and scenarios of Arkham Horror to date have all included elements of randomness. (It’s part of the charm, some might rejoice and lament.) Whether it be the chaos bag, re-shuffling decks mid-game, switching location cards, or just having to make blind choices, players constantly have to evaluate risk vs reward in a setting only partially deterministic. “The Forgotten Age” cranks this up to eleven. Still partially deterministic though more complexly so, there are more sophisticated situations and harsher penalties scattered throughout the campaign that can throw a wrench (or arrow, or spear, or tentacle, or…) into situations that seem to be going swimmingly. If you are the type of player who abhors such negative surprises, “The Forgotten Age” can be a frustrating campaign. If, however, your imagination runs fluidly, these occurrences are wholly on-point in terms of theme and story, and can be accepted in the adventure of the moment. Well, indeed, such things happen in the wilds. …and that happened. Nothing happens, however, that wasn’t at least hinted at (sometimes indirectly) or expected to have been imagined if indeed such a trek were a reality. If you’re going into the jungle, it pays to be prepared for anything, including the unexpected.

How does “The Forgotten Age” increase complexity? For starters, it adds a handful of new mechanics that apply throughout the campaign. The first is Explore. Rather than locations being visible on the table to access and investigate, most locations are now scattered throughout a separate deck that require an action to explore. If successful, investigators are able to move immediately to the newly discovered location and resolve its effect, the standard rules taking over from there. Another new mechanic is Alert. What Retaliate is to Fight, Alert is to Evade, meaning a failed Evade finds the enemy attacking and dealing damage. Another new mechanic is Vengeance. Where players normally put cards with Victory points in their display, cards with Vengeance points are likewise now put aside. Trick is, these cards do not grant XP. I will not spoil what they do, except to say it pays to discriminate. And the last major mechanic introduced is Supplies. At the outset of the campaign, players have a set number of points to spend on a list of available supplies (number depending on player count). Rope, torches, medicine, provisions, and a number of typical expedition items are available. Players spend their points by recording their supply choices in the campaign log, and as the campaign unravels, these choices come back to have consequences. You can guess the consequences of not having a particular item in a particular situation. Thankfully, the same is true vice versa. Wonderfully complementary to preparing for a trip into the wilds in the real world, you can assume you will need X, Y, and Z, but get a severe reminder that you forgot Q in certain situations. And there are a couple other new mechanics, including Seal and Poison, but they are more situational, and worth discovering in-game.

Like all deluxe expansions thus far, “The Forgotten Age” includes five new investigators. While a couple of their special abilities work nicely with the new mechanics, it’s not necessary to choose one; any investigator from previous campaigns is likewise viable. Ursula Downs is a dedicated explorer who is excellent at chasing down clues, but her passion pushes her so far as to be blind to the wider world. Leo Anderson is a military veteran who now leads a small but powerful set of allies into the jungle, ready to take down enemies with ease. Trouble is, he is ageing and can’t move very fast. Father Mateo is a priest with a score to settle with the dark jungle. Haunted by nightmares of the creatures who live there, he comes armed with books of spells to cast them out. Calvin Wright is a very unique investigator in the game. His stats across the board are 0-0-0-0 at the beginning of any scenario, but with each bit of damage and horror he takes, he gains strength—his most powerful form riding on the edge of death. And lastly is Finn Edwards, a bootlegger with jungle smarts able to efficiently put to use a vast supply of illicit items, but who is more adept at running from problems than confronting them. All in all, a great array of investigators that fattens the pool to twenty options for tackling the horrors of Arkham.

Of all the campaign cycles available thus far, “The Forgotten Age” appears the most divisive. Players seem to love it or hate it. I loved it precisely for being the most challenging, and therefore most rewarding campaign thus far. (“Path to Carcosa” still has the better story, however.) Dynamic variability also means higher replay value—and yes, faster replay if your luck runs out early. But one thing is certain: the campaign wonderfully recalls the likes of Indiana Jones and Lara Croft in card game form. The new mechanics all complement the idea of a pulpy, jungle expedition in rich, thematic, if not in surprising, creative (frustrating for some) fashion. Help is not always close to hand. Supplies run low. The dangerous and mysterious hangs perpetually at the edges of perception. People go crazy so far from civilization. Snakes do bite. And the outer-worldly is closer than you may think. Be prepared.

The Boundary Beyond (mythos pack)

Heart of the Elders (mythos pack)

The City of Archives (mythos pack)

The Depths of Yoth (mythos pack)

If I had to order the scenarios of “The Forgotten Age” in terms of personal enjoyment, here they are, best to almost best (there is not a dud among them):

4.5 “City of Archives” – If “The Forgotten Age” is the most dynamic campaign in Arkham Horror, then this scenario is one of the key reasons. Without spoiling anything, the setup throws the player into the deep end in a way the game has never done before.

4.0 “Depths of Yoth” – If there is any scenario in Arkham Horror that pushes on the player a sense of impending urgency, this may be the one. To be more specific, 99% of scenarios have the ticking clock doom mechanism to apply pressure on the player to act with efficiency. This scenario has that, plus a new mechanism called the “Pursuit Area”. Yeah, it’s hot breath on your neck…

4.0 “The Untamed Wilds” – The first scenario of the campaign (contained in the deluxe expansion), it gives players a full-on taste of things to come, and shows how interesting and thematic (and crazily difficult) the new Explore mechanic can be. (On solo, this is one of the most brutal scenarios out there.)

4.0 “The Doom of Eztli” – Wonderfully encapsulating the Indian Jones-feel the campaign was aiming at, this scenario is a fun mix of adventure, exploration, survival, and of course, numinous objects that feels highly thematic.

4.0 “Heart of the Elders” – A lot of people cite this as their most hated scenario in all of Arkham Horror, but for me it was another juicy bit of Indiana Jones/Tomb Raider goodness. It’s long, yes, but the pieces work well together and the ending is the biggest surprise any player will face.

3.5 “The Threads of Fate” – Feeling like true detective work, this is the first multi-act scenario in the game. Really coming down to the wire, it likewise forces the player to make interesting choices in terms of story direction.