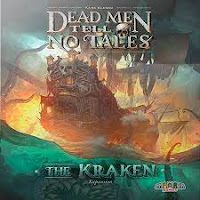 This review assumes you are familiar with the Dead Men Tell No Tales base game.

Pirates of the Caribbean in board game form, Dead Men Tell No Tales is a rounded, fun, cooperative game that requires nothing additional to thoroughly enjoy. The art, the gameplay, the variety and variability, the teamwork—it is one of my family’s favorite cooperative games. And with the modular tiles that change each game, replay value is higher than a lot of games whose setup is static. All that being said, it’s possible to spice an already spicy meal. With the Kraken expansion, Dead Men Tells No Tales has dug out the pepper grinder. Question is: is it full of habanero? Let’s see.

In highly thematic fashion, Kraken adds a big, fat chunk of fun gameplay and additional level of complexity to Dead Men Tell No Tales. If looting, fires, and undead skeleton warriors were not enough, then Kraken throws in the need to destroy a massive sea creature to beat the game. Attacking you as you move through the burning rooms and loot treasures, players have an additional, tentacled variable they must factor into tactics. Impossible to ignore, if the creature gets too big, he swallows the ship, and everything and everybody on it.

On top of a major new enemy, Kraken likewise gives players a few new tools. There is an axe card which delivers two hits of damage to the kraken, as well as cannons that can be arrayed to fire at the beast with the help of a second die. Players are given one additional action, raising the total to six, as well as the possibility to earn one of the many new reward tiles that come available when successfully taking down a tentacle or delivering a big blow to the kraken. These rewards playable as free actions when the player sees fit, they include lowering the fire level by three in any room, clearing three deckhands, and many other nice-to-haves that go a long way toward helping players achieve their dreams of gold. And lastly, a new pirate is added, Swivel Gun Sandy, whose special ability relates directly to attackin’ the kraken (complete with plastic mini for those who bought the pirate mini pack).

The production is amazing. The kraken and its tentacles look amazing, and all of the additional pieces (the tokens, cards, and other bits) perfectly match the motif of the original game, making for a seamless fit. The rules around the kraken, particularly how and when you can attack it, are slightly fiddly. If this, then that… in a couple of situations. But overall, the creature fits within the game’s mechanisms without disrupting what made the original game so enjoyable. And did I mention it looks great!

So is the meal too spicy with the addition of Kraken? For people new to the game, probably so. Players need to have a good grasp on the base game in order to introduce the sea creature. But once that familiarity is in place, the Kraken is not a mouthful of habanero. It gives the game an extra weight and sophistication some players may be looking for, on top of that wonderful layer of theme. Looking fantastic on the board and most often feeling fantastic, tacklin’ the kraken adds a lot of enjoyment for players looking for new challenges aboard Skellit’s Revenge.