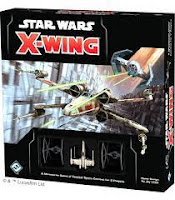 What to say? Want to be Darth Vader piloting a TIE Advanced to take down the Rebellion? Fancy taking a turn in the cockpit of the Millennium Falcon where Chewbacca and Han Solo sit? Want to live on the edge in a space battle with Boba Fett and his Slave I? Believe that Wedge Antilles was indeed the best X-Wing pilot in the Rebellion’s history? Bringing to life the dogfights of these and many, many other ships, the X-Wing Miniatures Game (2nd edition) is Star Wars space fighting in a box. (Pew pew noises for laser fire not included, but will likely be readily and happily supplied by players.)

X-Wing forgoes a board; only a table is needed. Players choose a faction (initially Rebellion or Empire, but with the purchase of other ships sold separately, more factions come available). Then they choose the pilots and ships from that faction they want to use. The ships customizable, players then select the upgrades they’d like to add, for example extra shields, crew members, auto-blasters, proton torpedoes, and the list goes on. Ships are positioned on the table, along with a few obstacles, and the dogfighting begins. Gameplay thereafter consists of two phases: move and shoot, and is repeated until all ships of one faction have been destroyed. That is the very quick and very dirty of X-Wing Miniatures Game. Pew pew!

The longer, more polished version I will not go into here, except to say there are a couple level of details that fill out X-Wing dogfighting into a rich, varied experience that really brings Star Wars to life. The movement phase is performed using templates, straight and curved, that are selected on movement dials unique to each ship. Bigger ships like the Millennium Falcon are naturally more limited in movement compared to smaller, more agile ships like TIE Fighters or A-Wings, for example. That being said, bigger ships often have more options for upgrades, including additional crew, more weapons, etc. Combat is done using custom dice, but not without significant modification. Missiles, torpedoes, distance, shields, etc. all influence dice rolls (how many? when? re-roll?), as well as the defender’s. Damage is split into standard and critical, with critical damage having its own small deck of cards that adds a wonderful amount of flavor. With other capabilities possible (cloaking, juking, barrel rolls, target locks, etc., etc.) the number of ways designers have represented Star Wars ships on the table is amazingly more than move and shoot.

And production is likewise amazing. The game is relatively expensive (more later), but the ships, cards, tokens, dice, and templates are all custom for the game. Each plastic ship comes pre-painted according to Star Wars lore, and sometimes with additional functionality, e.g. the X-Wing’s foils open and close. The eight-sided custom dice balance the game according to its own set of rules. And each card’s art is lovingly and wonderfully created according to Fantasy Flight’s industry leading standards. 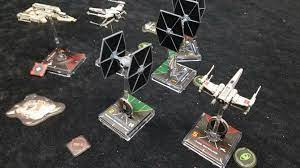 An important point: X-Wing is not a video game. It is a tactical game that does not move at the pace of real dogfighting. Each round taking +/-5 minutes, the cycle of move-attack, move-attack happens methodically. Ships are moved one at a time, and attacks likewise happen one after another. The rules framework is very simple, but within it are numerous nooks and crannies that allow for numerous options. These details largely card-based, initially players spend time reading to make sure conditions are met before certain special moves or attacks are made. But once things are understood, the game flows, and the move-attack cycle starts to feel smooth—like a stutter-stepped version of space ship battles, but still not real-time.

But for as many special attacks are possible in X-Wing, the game still comes down to how well you fly. Anticipating where your opponent will be for the next round of attacks and putting your ships in the best possible offensive or defensive position is how games are won or lost. Like fencing, or boxing, or chess, or in this case dogfighting, that’s how it should be.

There are not really any objective negatives about X-Wing 2ed. It’s a comprehensive game that captures Star Wars in so many, wonderful ways. If there is a negative, however, it would be potential cost. While the base game comes with everything you need to see two TIE Fighters duke it out with an X-Wing, these three ships do not represent a full, fighting complement. A full complement is points-based, depending on what types of ships, upgrades, etc. A true, complete game requires more ships. And there are dozens upon dozens of additional ships available—for a price. While each is wonderfully rendered and painted (collector’s items, if I had to be precise), they cost anywhere from $15 to $60, depending on size. (There are a few bigger ships in the neighborhood of $100, but these are rarely used, and for collectors or fanatics only.) Thus, building a small collection to be able to build a pair of full complements means spending in the neighborhood of $100. Want to have a dozen ships or so for options, add a couple hundred. Want to have ships in all seven of the factions, and the price approaches a $1,000. Want to have everything, and it’s easily a couple thousand. Of course less than 1% of players are buying everything, but for those who want a nice selection for play, look at spending around $150-$200. If you have an addictive personality, well, you’ve been warned.

In the end, there is no game on the market which captures ship-to-ship space battles in the Star Wars universe like X-Wing Miniatures Game 2ed. The ships wonderfully produced, they look and feel great—the pew pew noises coming out instinctively as you fly your TIE Fighter or X-Wing across the table. The game’s mechanics are simple to grasp, but customizable (via cards) to the point of being sophisticated (i.e. this is not a game for small children). Possible for both casual, family fun as well as tournament play, this is one of the best Star Wars games ever made.