At heart an optimist, until now I’ve tried to post the nicer side of India and gloss over the omnipresent evils. Fortunately, I’m also a realist, which means intentional ignorance cannot go unheeded for long. The dirt and filth simply must be discussed.

Let it be known, I do not find fault with the lower castes for the terrible situation they find themselves in. I place blame squarely on the shoulders of the upper caste, in particular those who have the ability to invest in their country’s waste water, waste removal, and clean water infrastructures, but don’t. The Louis Vitton and Nike shops I saw in New Delhi’s Connaught Place have no place among the hundreds of millions of poor and destitute. But as it stands, the caste system remains interminably oppressive, leaving the majority of Indians without hope to rise above animal status. Hence, I would like to dedicate this post to the largest facet of India I witnessed: the slap-in-the-face squalor.

India’s lowest caste often defecates openly in public. There is perhaps nothing more revolting than watching another human produce a steaming pile of feces arm’s length from the train you’re passing in. Contrary to popular belief, I witnessed both left and right hands being used to clean themselves after, not a drop of water or soap in sight. Making matters worse, railroad officials do not lock bathroom doors while trains are stopped at stations, thus providing a view of splattered human feces and pools of urine for passengers waiting on the platform, the reek eye-burning. Even the shadowy corners of Agra’s Red Fort, a Unesco World Heritage site, stank of urine, some Indians unwilling to walk twenty steps to the public bathrooms nearby. Open sewage. Every city’s water channels and canals feature a grayish sludge with milky streaks that meanders alongside dwellings and through parks, smelling as foul as anything can. And the cows. How can a place be civilized when cows walk and shit wherever they please? We have health regulations against this in the West for a reason. Sorry, but I’ll take science over religion on the open air feces debate.

With such an intimate connection between untreated waste and disease, one would expect Indian cultural eating habits to distance the less savory from the more savory. Unfortunately, people are using the same hands they clean their anus with to mop sauce and rice into their mouths. Hunched over plates and trays, people wad food in their hands and stuff greasy, filthy fingers into their mouths. It was sometimes like watching pigs at a trough. Yes, we eat with our hands in the west, but it’s objects naturally hand held; gravy and potatoes hold fork and spoon status for us.

If this connection to animality is not deep enough, I also witnessed women picking insects from the hair of others, their squatting posture exactly like National Geographic’s Congo. And drinking water? Well, the only water I dared touch in India was bottled, and even that I was told to be wary of. The Ganges in Varanasi is considered a holy river. But it’s treated as anything but. One person’s water buffalo urinates while a man a pace away takes a deep drink from the river. Upstream a fresh corpse is set adrift in the current, while downstream a mother washes her baby—plastic bottles and bags, rotten unmentionables, and rubbish of all variety floating in the space between. The temples, places of holy worship? No, they are as dirty as the streets. Walking through Kolkata’s most sacred Kali temple, I had to wave clouds of flies away, mounds of rubbish pushed to the sides of the walk. Nothing speaks of reverence and piety like maggots and trash.

Great drifts and piles of refuse blight India. Like snow, people dispose of it everywhere and anywhere they can, the world their landfill. Unbelievable until one sees it, the trash is a playground for children, a bed for dogs, and lunch for cows. Like the emaciated man laying in his own waste outside the Patna train station, nobody seems to care, and India gets dirtier, one empty chip bag and Coke bottle at a time.

Suffice to say, I was blown away by the hygiene standards of India. I expected bad, but the filth and squalor I witnessed was depressing. I lived in China for four years—another country featuring a billion of mostly poor. But like Sisyphus, the Chinese employ street cleaners and place rubbish receptacles in public areas. Toilet paper is a common and cheap commodity and chopsticks, perhaps the world’s most sophisticated eating device (much more refined than the stab and cut of Western knives and forks), is employed at every meal. Yes, the Chinese may not place limitations on the egress of gas from the orifices, but at least this can be spun into a compliment, i.e., the louder the belch, the more delicious the meal.

But I digress. I will let the following photos speak for themselves. 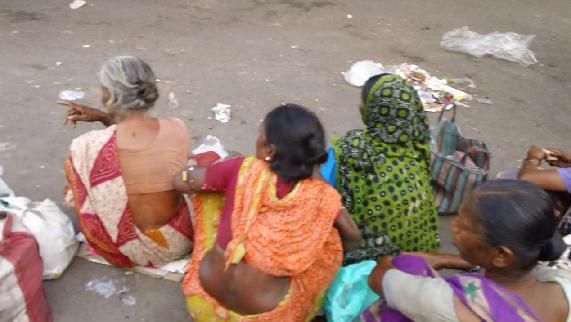 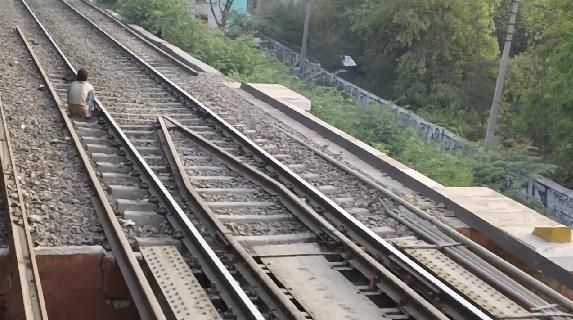 This man is not in gentle repose, taking in the morning light.  He’s one of hundreds of people I saw shitting in plain view beside our trains. 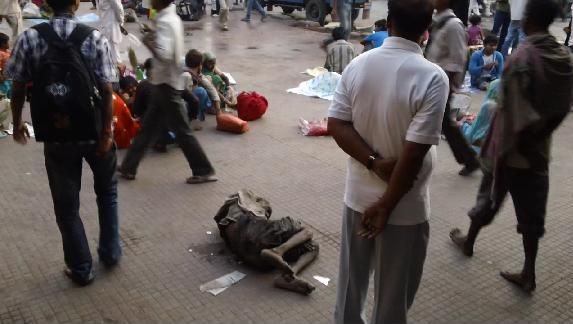 Said man at the Patna train station.  Pictures are truly worth a thousand words, sometimes. 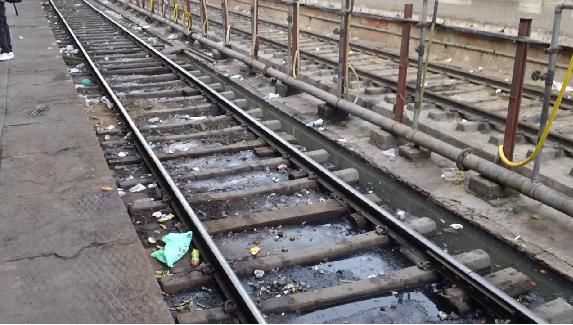 This is standing on the platform at Agra’s main station, the tracks pooling with urine, rubbish, and gods know what else.  The smell was overpowering.  With 2 million people passing through Agra to visit the Taj Mahal every year, it’s obvious station maintenance is high on the list of local officials' priorities… 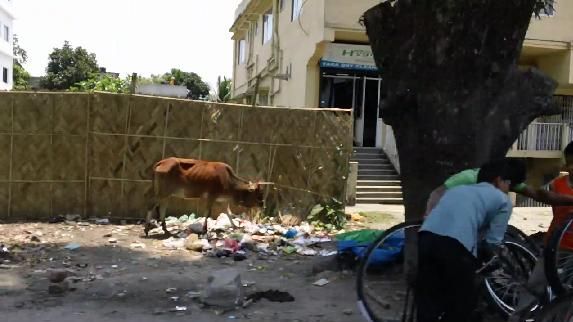 Yet one more cow happily munching rubbish.  Such is the price of freedom for the city cow. 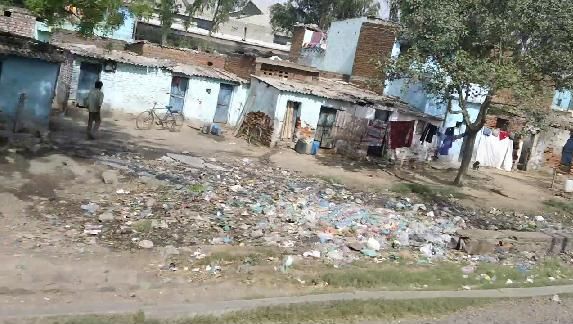 The endless slums of New Delhi.  At least these people have a brick “home”, unlike the tarpaulin and rope structures I witnessed on the outskirts of Kolkata. 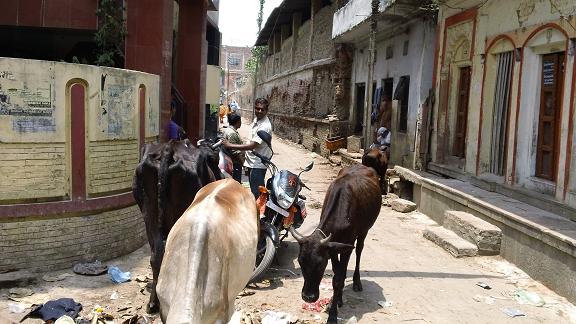 The less holy—or more holy, depending on perspective—streets of Varanasi.  These cows are ensuring next year’s sidewalk crops are well fertilized.  (People walk barefoot through this!!) 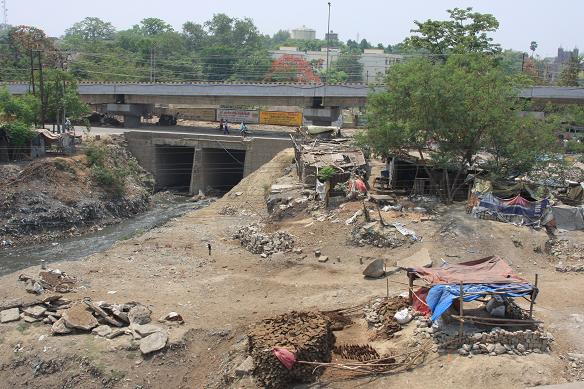 More slums.  I included this photo as I thought it represented the slums well.  There's a little of everything, a stream—I mean, sewage channel—tarpaulin shacks, mound of drying cow paddies, strewn rubbish, concrete, dust, etc., etc..  The Taj Mahal is but the painted pinky toenail of the dog. 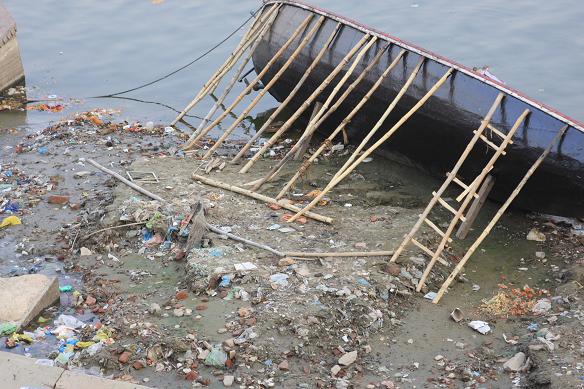 These Ganges boatmen must not have wanted their boat getting dirty.  (Sorry, bad joke.) 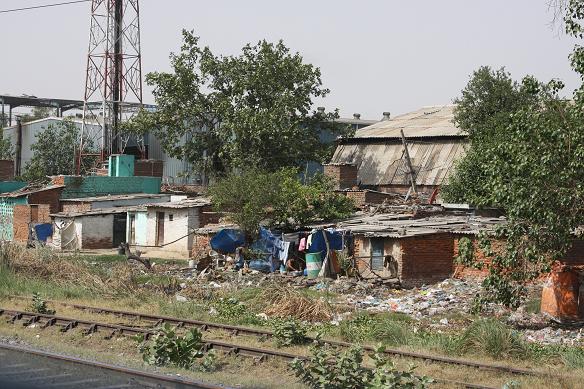 More slums of New Delhi.  I’m guessing the upper caste does not use the cell phone tower in the background as a means to discuss the state of life for those living below… 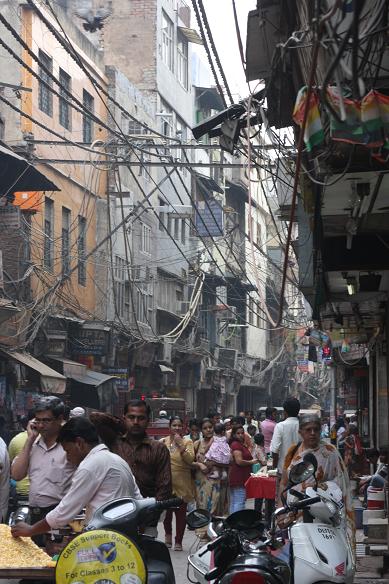 A nightmare for a person with allergies, this is an inner city street of New Delhi.  The swirling dust and exhaust fumes only making things worse, how electricians make sense of the overhead wires is beyond me. The dust and smog rise above, as well. New Delhi’s skyline is a beautiful dirt brown.

While I hope for drastic changes to India's social system, changes that would spell good news for human rights and environmental mitigation, little seems to exist. No matter how bad our lives may be in the West, nothing compares to millions of poor living in India--hand to mouth in more ways than one. How can India have the 10th largest GDP, yet allow 95% of its citizens to live in such deprived conditions?