Many of the cities we passed through in India were mirror images of each other.  The dust, poverty, filth, and heat of Siliguri, Patna and Kolkata was universally depressing for the simple fact nothing could be done to dispel the lifeless pall permeating each.  Varanasi, while possessing every inch of the crust and grime of these cities—if not more—nevertheless presents a positive side to the world.  And it’s the Hindus who make it possible.  Being one of several holy cities alongside the Ganges River, the people who call the city home and pilgrims come from all around to bathe in the holy water provide a spark of color and life that other places in India we visited simply did't have.  And so despite entropy’s active resolve to dismantle the city, one dusty temple at a time, the reds and yellows of pilgrim robes, beards and exposed ribs of reposed swamis flicker while time grinds the city to ruins. 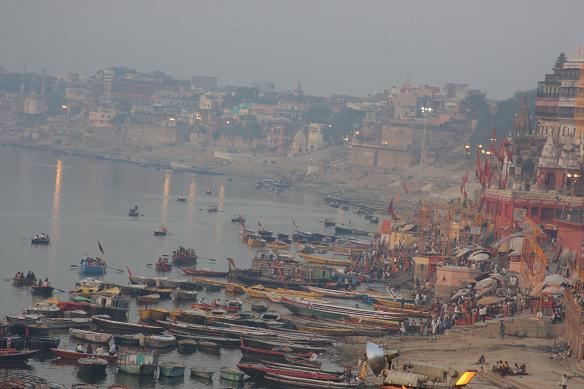 Varanasi on the Ganges, the holy Hindu city. 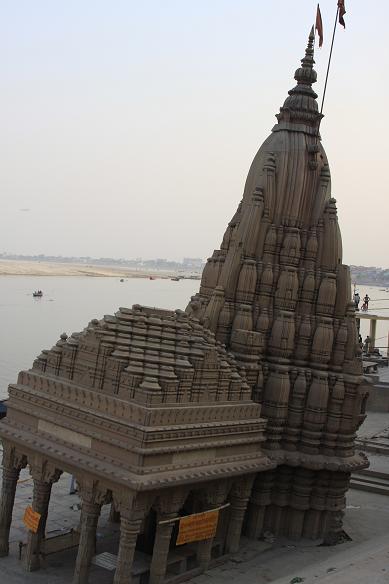 Entropy at work on one of the many small and fast deteriorating temples in Varanasi. 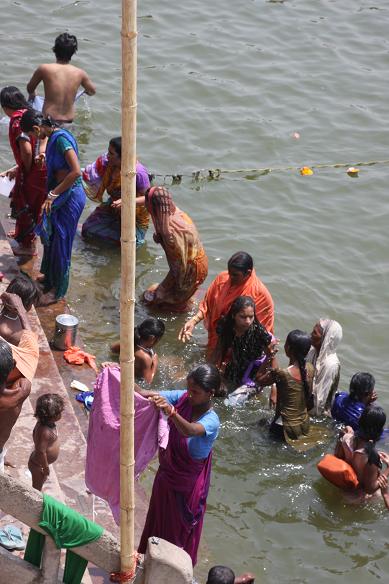 A be-all, end-all, the people of Varanasi use the river’s waters for everything.  Swimming, bathing, boating, trash disposal, corpse disposal, animals, religious ceremonies, and dishwater are just some of the uses we saw. 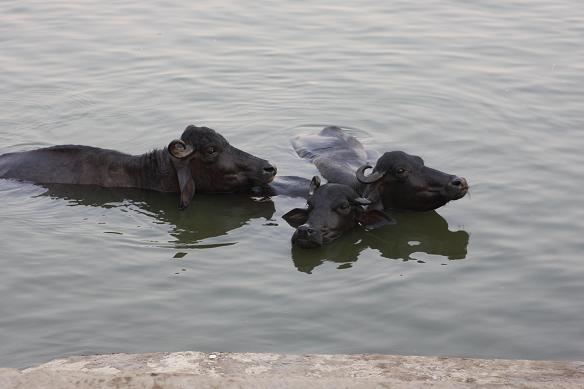 I don’t know exactly what accommodations these cousins of the cow are granted in India, but at least they too can escape the heat and have a swim in the river. 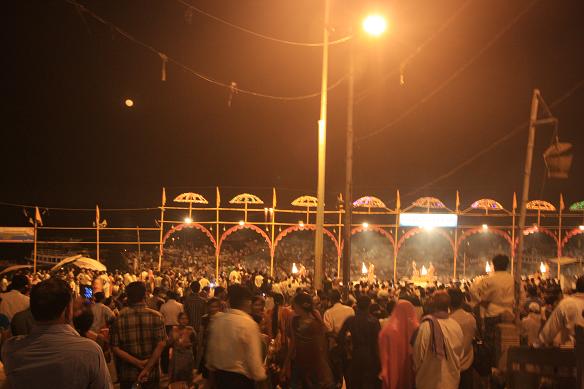 Every evening—and I mean every evening—the Hindus hold sunset ceremonies along the banks of the river.  Crowds gather on shore and in boats to watch the Brahmins wave their candles and censers in rhythm with monotonous bells and drums. 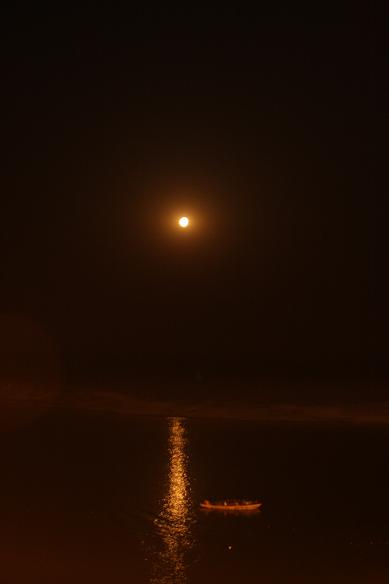 We were lucky enough to be in the city while the moon was full, here seen rising above the river from our hotel room. 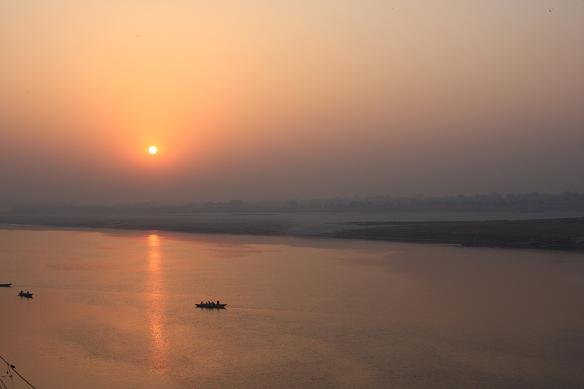 And, the next morning’s sunrise... 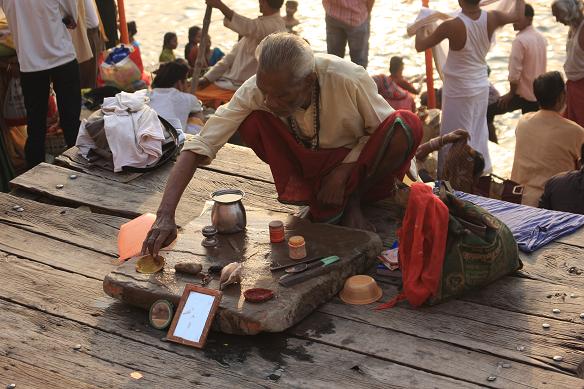 The heat oppressive, one must wake up early to take in the activity of the people along the river in the morning, the afternoons for escape.  Not exactly sure the religious status of this man, I can only pass along the things I witnessed him doing.  After collecting some water from the Ganges in his small silver bowl, he proceeded to incant the stone, splash some water, then arrange these objects--shells, combs, mirrors, rocks, in some particular feng-shui order.  Later, after men of the city finished their morning’s bath, some would approach to borrow a comb and mirror, receive a blessing, and have a fresh dot planted on their forehead.  Barber-sage is the best title I can come up with.  I really need to read more. 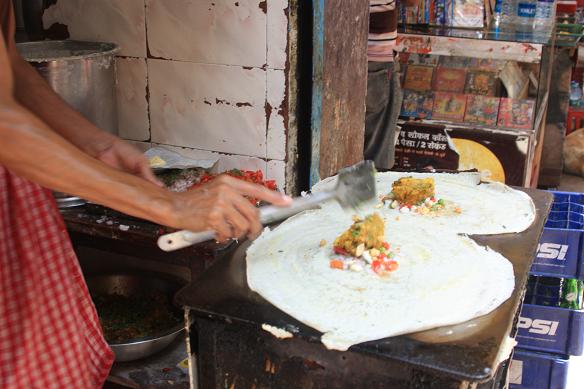 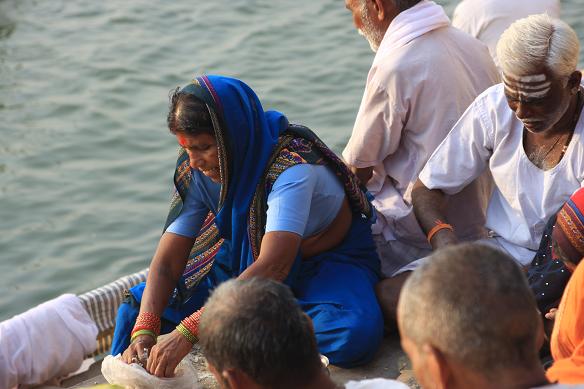 More pilgrims on the waterfront.  These rolled what was either dough or clay into small balls, and after performed a small ceremony.  I really, really need to read more… 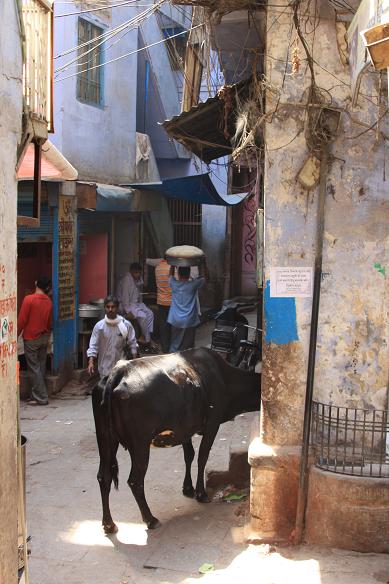 A cow in Varanasi's side streets stopping by to say “Good morning” to a neighbor. 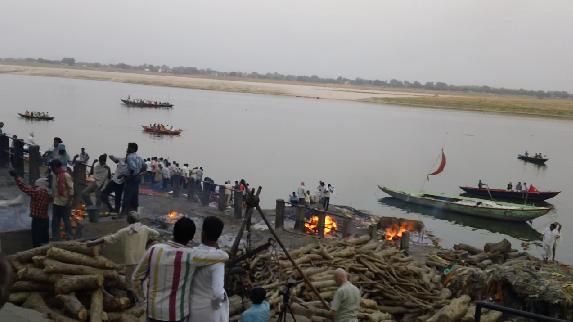 This is one of Varanasi's main burning ghats .  Corpses wrapped in colorful cloth are brought here and readied for cremation.  Wood is weighed and paid for by the surviving family prior to setting the pyre alight.  Afterwards, the ashes are dumped in the Ganges. Kindly note the cows munching rubbish happily on the shore. 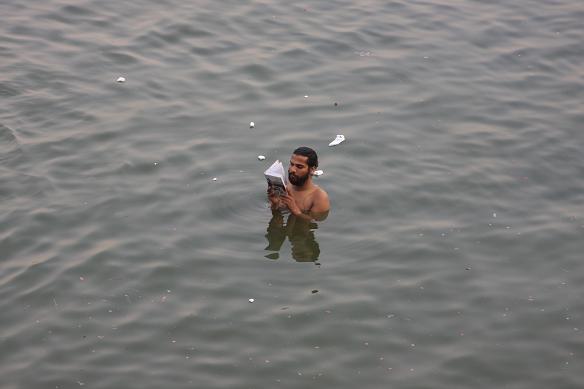 It is only in a trance-like state that one can be unaware of the trash, cremated ashes, and bloated bodies of dead cows in the “holy” Ganges. 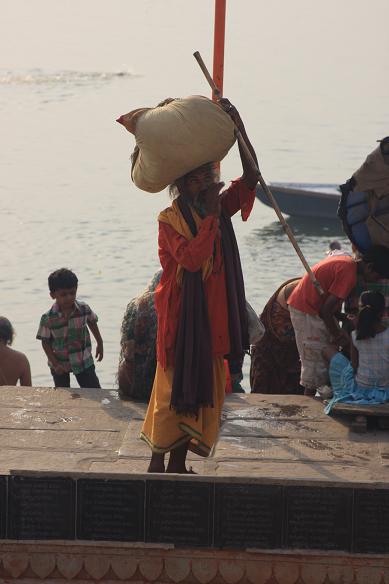 A pilgrim on his way to who knows where.  I suppose, neither do I...