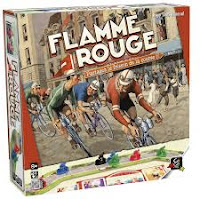 Flamme Rouge. Let’s say it together—properly now, no coarse American consonants: Flamme Rouge. And repeat: Flamme Rouge - Flamme Rouge. C’mon, roll that ‘r’—Flamme Rouge… Ok, now in English: Red Flame. Hmm, I see. Not as nice a ring. Seems good English publishers stuck with the French name. So much better than Bicycle Race, or Tour de Alpes, or Two Wheels through the Mountains, or—ok, ok. I’ll stop. On to the board game review.

Flamme Rouge is a 4-player, tactical bicycle racing game that has some delightful parallels to real world Tour de fill in your country___. Races held on modular courses that can be disassembled and re-built in a huge variety of ways, players draw and play cards to propel their two-cyclist teams toward the finish line and victory. Coordinating your small team a requirement, drafting sees cyclists gaining spaces for free, just as being at the front of the pack will find your cyclist taking exhaustion that will inevitably come back to haunt them in the latter stages of the race. Uphill and downhill sections changing the rules slightly, a player must be aware of what is ahead as much as where the other cyclists are if they want to win.

Talent and luck taking equal turns trying to balance one another, Flamme Rouge is a great family game rich in both theme and skill. The rules extremely simple yet playing out in enjoyable, engaging fashion, most games come down to the last turn to see who wins. As with many racing games, players are relaxed out of the gates, numerous rounds to go, everything will be fine. But a strong sense of tension and excitement arises the closer the cyclists get to the home stretch, culminating in the satisfaction of relief for the victors, or frustration for the losers—If I hadn’t played my last 9 on that stretch there, I would have likely had it in my hand for the home stretch...

Production is fantastic. The plastic minis are solid as-is, but perfectly paintable if you like. (If there was a complaint about them, it would be that the two types of cyclists, roleur and sprinteur, can be difficult to distinguish.) The board and supplementary art are all very evocative of the theme, particularly the early 20th century when road cycling was an alternative sport, not the juggernaut of advertising it is today. And as mentioned, the modular tiles are a fantastic, well-designed way of ensuring there is plenty of track diversity, not to mention the possibility of stringing several tracks together into a lengthy tour. 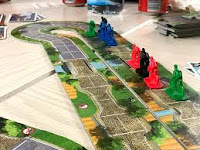 I play Flamme Rouge with my five-year old son, but I wouldn’t say he fully grasps the strategy of the game. He plays cards, things happen, and with more people playing, the more likely his semi-random moves turn out for the better. But there are also many cases he ends up with a fistful of exhaustion cards toward the end of the race, and frustrated. Seven, eight, and beyond seem better ages to play the game and understand the concept to the point of being competitive.

I would like to take a paragraph for an editorial—just a paragraph. I’ve read complaints, minor as they may be, that Flamme Rouge is not “diverse enough”. Each of the cyclists male varieties of vanilla, indeed there are none female or non-Caucasian. But I would defend the game’s designers. They obviously faced a choice in the design process: to go diverse (i.e. work with modern cultural expectations to include a varied field of cyclsits) or be historically accurate (i.e. use a bunch of moustachioed European dudes with skinny legs from the early 20th century). While some say that diversity is more than an expectation—a requirement, I don’t. Authorial right, whether you agree with the presentation or not, is part of free speech. I won’t argue the pros and cons of being diverse in a game; generally I wholly support diversity. But I would ask, given Flamme Rouge’s style and setting, would it be as effective artistically at evoking the feeling of early 20th century Europe with a diverse group of cyclists? Given that Alpine cycling was not a diverse sport at that time, the gesture would ring false, dare I say, token. It’s the equivalent of making a realistic movie about the Polish Army in WWI, then having 25% Asian, 50% female, 33% tall, 33% short, 25% black, etc., etc. The plot of such a movie would be what it is, but viewers would at least have the incongruity of cultural representation subconsciously in mind the entire time, distracting from the experience. The Polish army was almost entirely pasty white dudes. Forcing ethnic and gender diversity into an environment that historically had extremely little would be a hollow gesture, at a minimum requiring the artistic motif to be changed to accommodate the absurdity. The game Colt Express, for example, went the cartoon route in order to fit diversity into the wild west—which works extremely well for the game’s fun, light atmosphere. Thus, I respect the designers of Flamme Rouge for maintaining artistic integrity, something that is not always subject to the demands for diversity. And here ends my editorial.

In the end, Flamme Rouge is one of those games whose theme will be appealing or not, but whose depth reveals itself slowly but surely. It is also a game ripe with potential. Indeed, innumerable fan-made tracks have been posted on various sites, and the designers themselves have posted dozens of additional tracks in the Flamme Rouge app. (The app is great for tracking points with you and your friends for an extended tour.) Quick and tactical with a splash of luck, it’s a great family game that has something a lot of racing games, don’t. Check it out.