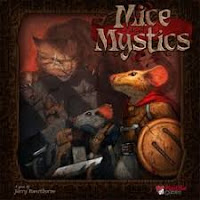 As a child, I loved Brian Jacques’ series of Redwall books. Watership Down with strong Arthurian overtones, they all featured a band of heroic rodents fighting the forces of evil, typically rats, snakes, weasels, foxes, and the like. Wonderfully vibrant and imaginative, these stories still live in my memory today. Coming across Plaid Hat Games’ Mice & Mystics was like discovering Redwall in board game form. While the tangibles of board games are limited when compared to the intangible horizons of books, I still could capture some of that feel, the feel of mice with swords battling evil in their own, small world.

Mice & Mystics is a cooperative game that plays out the story of Colin the Warrior, Tilda the Healer, Lily the Bowman, Filch the Scamp, Nez the Tinkerer and Maginos the Mystic in their fight against an evil queen who has taken their castle hostage. A light role playing game with miniatures, players traverse tiles and slay baddies while following story instructions in a gamebook. There are ranged and melee attacks, players can upgrade their characters, a variety of spells and items can be discovered, story achievements can be had, and a number of other details flesh out the mice’s adventures through the castle’s basements and sewers and in its dining halls and sleeping chambers.

Appropriate for children, the game does not feature excessive violence or gore, or anything scarier than a giant spider. The story writers keep an air of playfulness to the narrative in the characters’ banter, and moments of high drama are directed more at emotions than graphically depicting the scene. In fact, Mice & Mystics is an excellent family game. Adults and children can easily take on the roles of the mice, heroically battling it out and helping each other. It may take longer than two hours to play out a single story chapter with a group, however, given ow each chapter is broken up into sections based on the modular tiles, it’s easy to pick up, put away, and take back out at another time. A couple of notes on a piece of paper or photo in your mobile phone about where things stand does the trick.

Beyond story, where Mice & Mystics makes its mark is perhaps the production. The box chock full of plastic and cardboard goodness, there are dozens of miniatures (that can be painted—another fun thing to do with the family), ten two-sided tiles that depict various locations and give gameplay a lot of variety, a number of item and skill cards, again greatly enhancing the ways in which characters can upgrade and deal with minions, a gorgeous storybook filled with art and pictures, custom dice that suit the game perfectly, and many individual tokens which help individualize certain story moments. Mice & Mystics will cost more than the average board game, but after opening the box it will be clear where the investment went.

The high production value of Mice & Mystics, combined with the quality story, take the game a long way. But there are some aspects it can’t overcome. The foremost would certainly be the repetitive, or perhaps more precisely, the increasingly non-unique nature of gameplay. Each story chapter takes the band of heroes through a series of tiles, and while the encounters that are generated on each tile are random, the same idea gets repeated over and over, often with only limited connection to the story. Every tile players enter has an encounter with baddies. Thus, while the boss fights stick out for their uniqueness, going through the fifth tile in a row, fighting the same rats and cockroaches with no story backing, can become pedestrian. The later expansion Downwood Tales corrected this problem by adding significantly more one-off scenarios. Instead of generating a random encounter with the same group of baddies every tile, it put specific story instructions in place, for example, escaping an owl, or stealthily navigating a location, or rescuing a fellow rodent, etc., etc. Mice & Mystics, particularly after getting through the fourth or fifth chapter, starts to wear thin, and could have done with a lot more customized content—an unfair criticism some might say given the degree to which the game is already customized. Overall, the game would like itself to be a story-driven game, but it slowly becomes that it is just as much an action game with limited options.

Mice & Mystics is or has become a classic on the board game scene. It has been reprinted several times, and the reasons are clear. Amazing production (we loved painting the plastic miniatures), wonderful story, clear, simple rules, and overall an excellent time for a family. The game can become recurring the more the game loop repeats itself with little variation, but the strength of the story is enough to pull through. Family friendly don’t’ let the dark, grim imagery fool you. This is Redwall in playable form.