Review of Protector by C.J. Cherryh 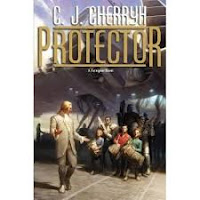 For this reviewer, Intruder, thirteenth novel in C.J. Cherryh's Foreigner series, was one of the high points of the series thus far. In Machegi, there was finally an element of conflict to support what has become a rather boring behind-the-scenes-conspiracy that Cherryh seemed to continually pull out at opportune moments to keep ninjas on the field as threats to Bren without any real substance beyond. Machegi brought out the true diplomatic elements which made the first several Foreigner novels so engaging. 2013's Protector exists to ask the question: can Cherryh maintain the substance?

Well, if one is to judge by the cover, the answer is no. Bren guiding/protecting a group of children does not seem a promising concept. And for 75% of the novel, the answer rings true. In true Cherryh style, the narrative takes its sweet time building up. But when it hits, it hits. There is an extremely quickly escalation into the climax (at least in Cherryh's terms), and the backstory delivered is meaty. Indeed human guests from the space station arrive for Cajeri's felicitous ninth birthday, but behind that intrigues and cabals that have been bubbling for ages finally come to the surface.

For the record, Barb is gone but the battle bus is back—a good trade. Long sections of reading the past several books have been with a sly smile on my face; Bren and the atevi riding into a firefight aboard their custom battle bus is humor I can't ignore. Not a horse and wagon and not a tank, not a station wagon and not an SUV, I can't hep but picture an extended, 1960's Volkswagen micro bus, complete with white-wall tires, riding into battle. Though robbing some of the tension of what are supposed to be suspenseful scenes, it's hilarious picturing the group trundling along country roads in an armored passenger bus on high alert, pulling up to whatever village manor has the latest potential traitor to Taibini, and getting down to business, bullets flying. There is nothing else like it in sf, for as comical as it is, and in Protector it makes a glorious return. Long live the battle bus.

In the end, Protector has a high barrier to entry; it can be frustrating going into the details surrounding preparations for Cajeri's birthday party for the majority of the novel. But when things kick into gear—and it happens very quickly, the book becomes a page turner with major implications to the broader situation.

Is this finally the book Cherryh has switched to focus once again on the wider affairs of the universe, rather than atevi?? Is Cherryh even still working in cycles of trilogies? Lots of questions, but the Foreigner universe, after fourteen books, is still an interesting place to read.