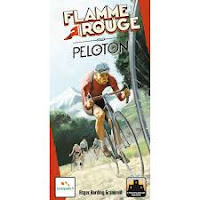 This review covers two expansions for Flamme Rouge: Peloton and Meteo. While I review them together, they must be purchased separately.

Flamme Rouge is a board game ripe with potential. Card-driven racing, the base game came with the possibility of four players challenging one another across a huge number of potential track layouts. Undoubtedly aware of their game’s potential but waiting to see if it caught fire (har har), the designers surely breathed a sigh of satisfaction when the game caught the market’s eye, and that potential could start to be realized. Peloton and Meteo are the two expansions which have since arrived on shelves.

Peloton adds a number of things that diversify gameplay immensely. Foremost, it adds two additional teams of racers, pushing the player count up to six. It also adds a couple, slightly modified rules for the game to handle up to twelve racers. Next, it adds a couple cards which allow for the usage of dummy teams. For a two player game, having these additional one or two (or more) teams of dummy racers on the board adds to the atmosphere and makes things more tense and exciting. Thirdly, the expansion adds roughly a dozen new track tiles, some with new terrain. Capturing the early-20th century feel of road cycling in Europe, many of these new tiles feature cobblestones, which slightly change how cyclists move and slipstream. Building on top of these new tiles, designers included a set of cards which simulate a tour de ____.

Truly a mini-expansion (it comes as a handful of shrink-wrapped cardboard), Meteo adds two small items that enhance the gameplay experience in subtle but fun ways. First, is the introduction of weather. A simple randomizer dictates sections of track that receive weather effects, including rain, cross-wind, heads winds, and tail winds. Secondly, a rule is introduced which creates a crash situation if the rain effect is in play. Rain not guaranteeing a crash, it’s the possibility of a crash which adds tension to the game as players cross through the affected area.

In short, Peloton and Meteo do exactly what expansions should do: diversify gameplay for those comfortable with the base experience but are looking for variety, without disrupting the qualities which make the core experience so much fun. Neither of the expansions are necessary; the base game works extremely well. But I would say, that my son and I’s gameplay is all the more fun racing against AI teams through rain and wind. We never play a game without them. If you want more than four players, then Peloton is a necessity. And if you want a traditional, cobblestone-esque racing experience, then Peloton is also a necessity. Personally, I can’t wait to see what the designers come up with next. There seems room for more…