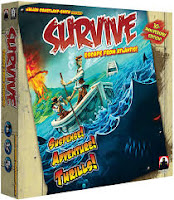 Over the past couple of years I have encountered various people online, in forums, video reviews, comments sections, etc. who are sensitive to games with a “take-that” element or comment. Personal preference is, of course, unassailable—except by rampant criticism, cynicism, and upon occasion physical violence. And for that, nobody can say such games are ostensibly 'good' or 'bad'. But for that personality type who doesn't mind a little take that amid their shark-chomping, rescue raft fun, there may be no more an enduring board game than Survive: Escape from Atlantis.

In Survive: Escape from Atlantis, players try to get their meeples off a sinking island that is doing its best to kill them, and if the island doesn’t kill them, then surely the sharks, whales, sea dragons and fellow players will certainly have a stab at it. Players must do their best to remember the number hidden on the bottom of each of their ten meeples, trying to get those of highest value to safety first. Spoiler alert: given the riotous chaos that evolves, this philosophy devolves into: get any of my meeples to safety, regardless of value. The game’s win condition is total number of points from rescued meeples. (With my four-year old daughter, we sometimes just play total number of meeples still alive.) There are a few things to help the meeples, including boats and dolphins, but the sea is still a dangerous place, not every meeple seeing the end of game.

Survive is 45–60 minutes of tactics and luck for 2-4 players, especially families—families who like a little friendly competition. Not for snowflakes, your meeples will get tossed on the seas of fate, and in the mouths of sharks. It is not a happy-happy, huggy-huggy game in which players are working together to build comradery while accomplishing a goal. It’s a dog-eat-dog, rugby scrum. Here, let me hold your hand while you step off this sinking island into a boat. No. It's more like: Here, let me elbow you in the face to make sure I have a place on the boat while you are left to the whims of whales, sharks, and sea dragons. The game does not champion human values, rather survival values. 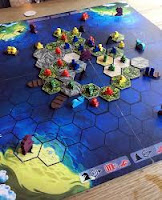 To be completely fair, the game treats everybody harshly—and quickly. There is not build up of moves that has players putting grand schemes into place only to have the rug pulled out from under them. No, it's very move to move. Bad stuff happens almost every turn, to almost every player, which means most players (except for my four-year old daughter) quickly become immune to the idea of, Oh, two of my guys were just swept away in a hurricane, and Well that wasn’t very lucky to have parked my guy right over a shark. And soon enough they start thinking, Of what I’ve got left, how can I get them to safety? And that is where the tactics, and some would say fun, of the game takes over.

Bottom line is that Survive: Escape from Atlantis is one of the board games my family enjoys most. I understand there are some people who dislike the constant “take-that” element of gameplay, and if that’s the case for you, don’t buy it. For less sensitive souls, Survive is a good way to destroy relationships. I joke, of course. My four-year old daughter stays angry for all the time it takes for her turn and the chance to eat daddy’s meeple with a shark. Rather than a giant Take-That moment that upsets all your best made plans, Survive is comprised of myriad take-that moments that quickly desensitizes the player to such things given everyone is in the same (proverbial) boat, dealing with roughly the same losses and disrupted plans. So there, take that... recommendation. (Sorry.)