All the following photos were taken in a part of China called Xinjiang by the Chinese, East Turkestan by the locals.  You may have read about this part of China as this summer there were some violent riots.  Not Chinese, the local people are in fact their own ethnicity.  Though blended with various Middle Eastern cultures over the centuries, they call themselves Uigurs and have nothing in common with the Chinese other than being neighbors and forced to be part of the same country.  That they have to put up with the Chinese as rulers is what makes them riot, their Islamic ideology clashing with atheistic Chinese doctrine.  For the two weeks I spent traveling in the wake of the riots, the Chinese military drove the streets, loudspeakers blared propaganda, soldiers patrolled, and nearly every mile had a military checkpoint, at which I was nearly always given an anal cavity search.  God bless militant governments!!  So, here are the photos… 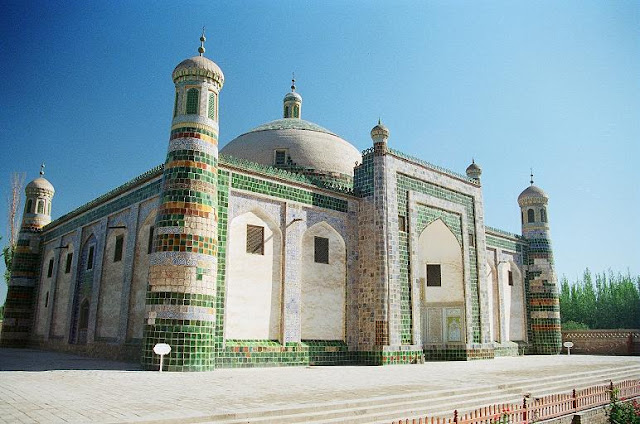 This is the tomb of Abakh-Hoja.  What?  That name means nothing to you?   Well, you’re not the only one…  But to the locals he’s important, important enough to get this grand resting place for he and his many wives.  (And definitely not Chinese, yes?  But yet somehow still part of China…) 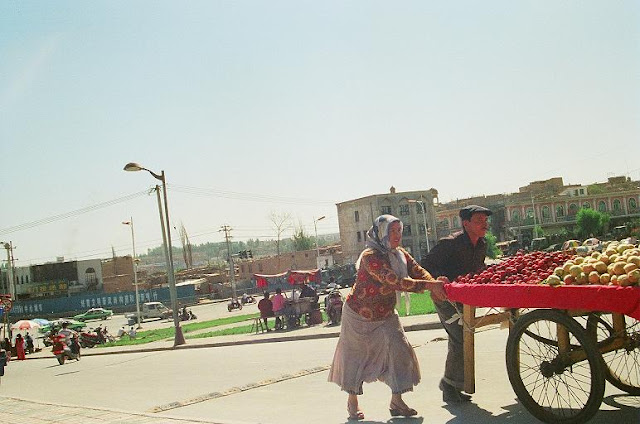 A street scene from the city of Kashgar.  A major point on the silk road centuries ago, the city still has the largest Sunday market in East Turkestan.  And if you look behind the woman's back you will see a military convoy patrolling the streets. 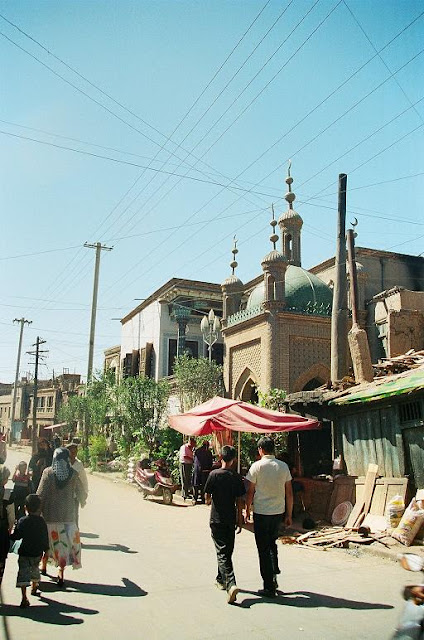 Another street scene from Kashgar’s old town, complete with a small mosque,which exist on street corners like Baptist churches do in New England or cathedrals do here in Poland. 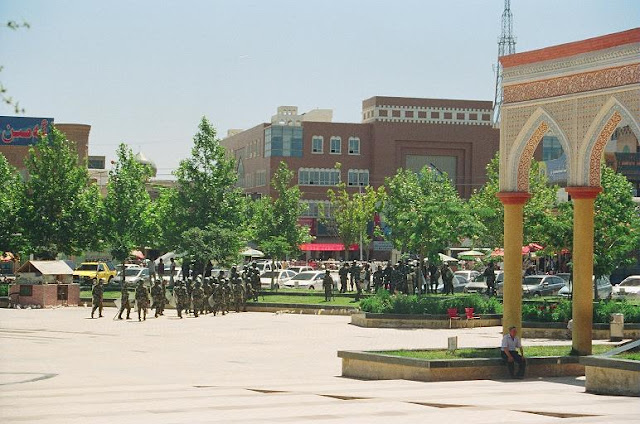 This is a photo of the Chinese military in full riot gear and with automatic weapons, patrolling the streets of Kashgar.  One of the soldiers told me “You’re not allowed to look.”, so I imagine taking this photo would not make their list of acceptable behavior, either. 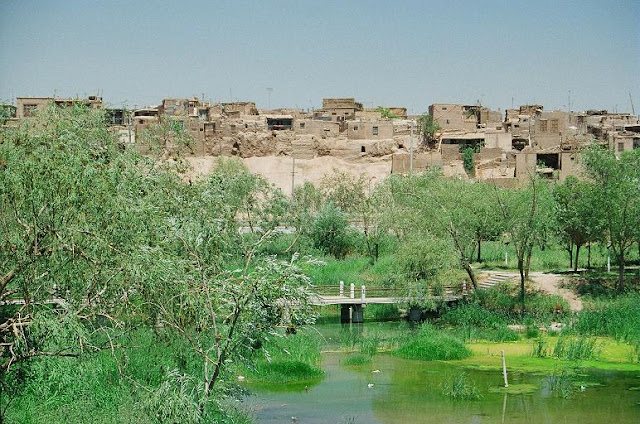 Another view of Kashgar’s old town… 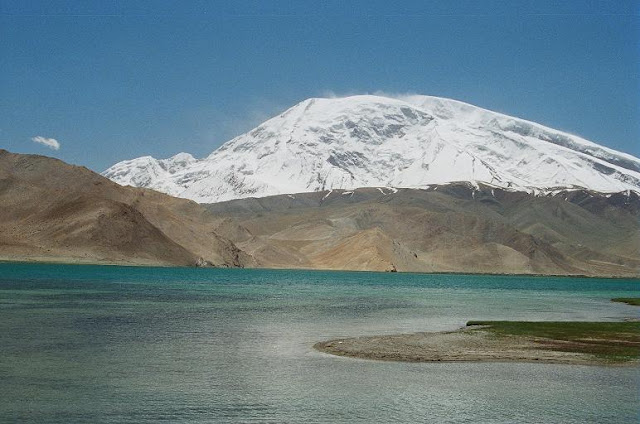 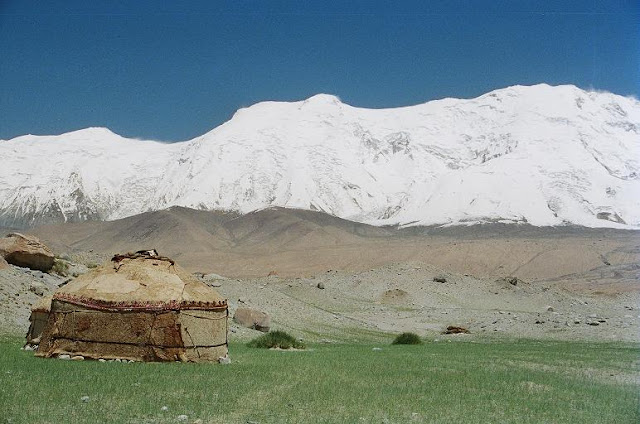 And to the other side rises the 7719m (25,300 ft.) Kongur Mountain.  Close to Pakistan and Kyrgyzkstan (sp?), in the foreground Kyrgyzstani yurt.  K2 is relatively close to this lake, but I didn’t have time to visit (and certainly not to climb). 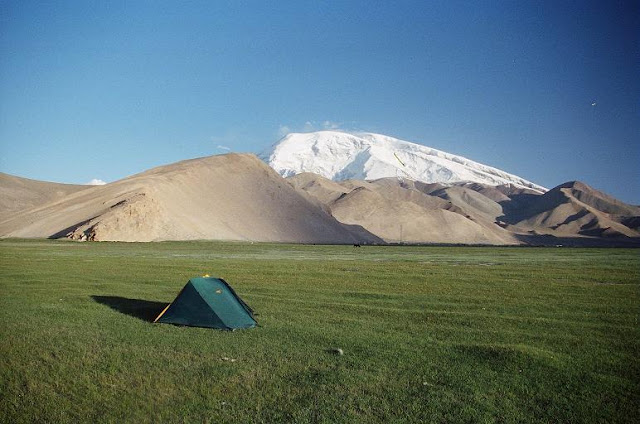 I kept things simple and climbed one of the foothills, a mere 4,800m, and camped at the base of Muztaugh-Ata with the locals horses as my neighbors. 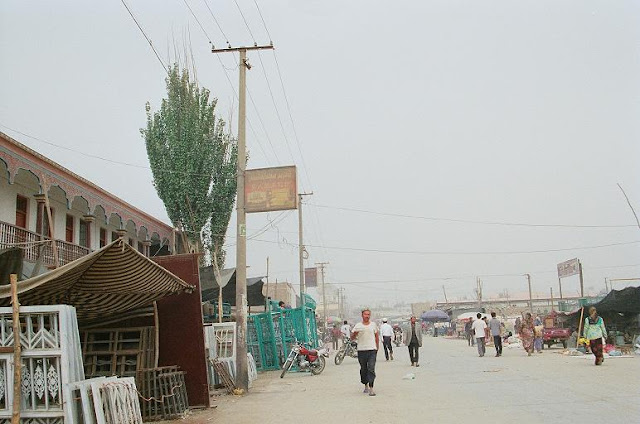 From Karakul, I slowly made my way across the southern Taklamakan Desert, which was full of dusty, hot desert towns like this above.  Many years ago they were part of the major overland trade route between China, the Middle East and Europe, but now they are just washed up, dusty places full of people living hand to mouth. 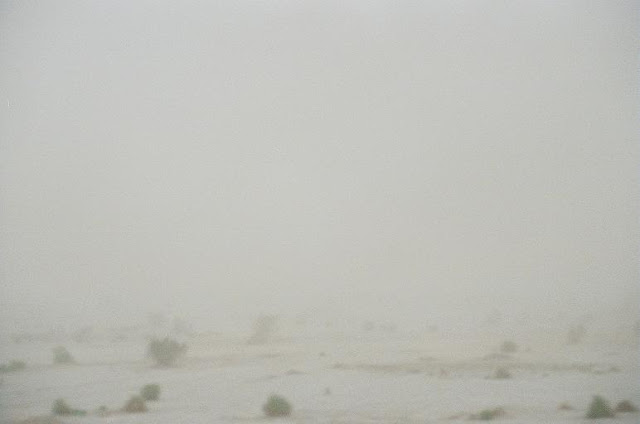 Like a snowstorm but of dust and sand, this is the Taklamakan Desert, one of the world’s most inhospitable places. 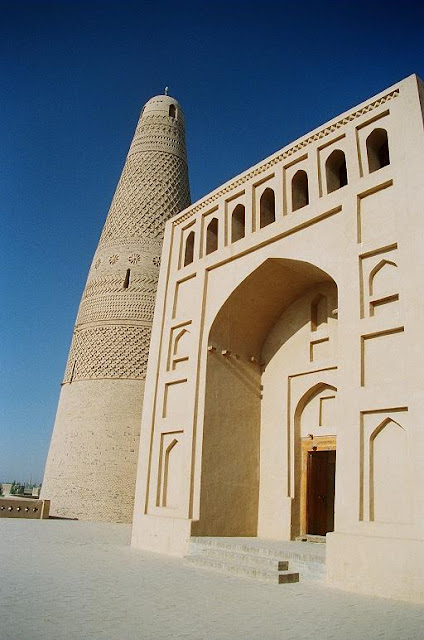 This is the beautiful mosque and minaret in the city of Turpfan on a nicely toasty 42C (107F) degree day.
Posted by Jesse at 9:57 PM