These two sets of photos upcoming are taken from the month I spent traveling around China after my teaching contract was finished in 2005.  I traveled a ridiculous amount of miles, spending something like four full days on a train or bus.  I think I’m still worn out from it.  Never again… maybe... 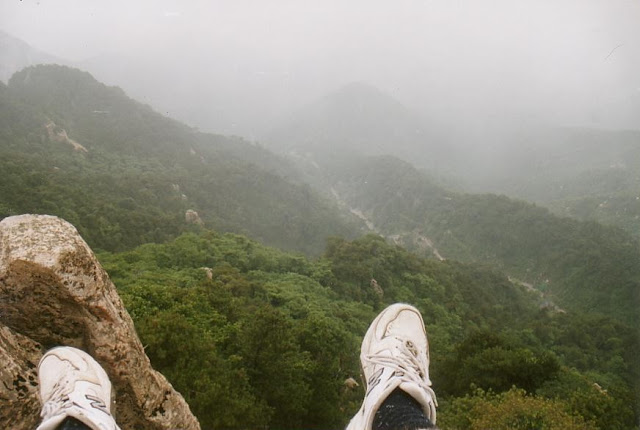 The first place I went was Mount Tai, which featured the path of eighteen bends (seen as a faint white line above my tired right dog).  It should have been named: “Path of Quadricep Torture” as it was a stone staircase that went straight up the mountain for about 6 km.  My feet are happy to have nothing beneath them but air for the moment... 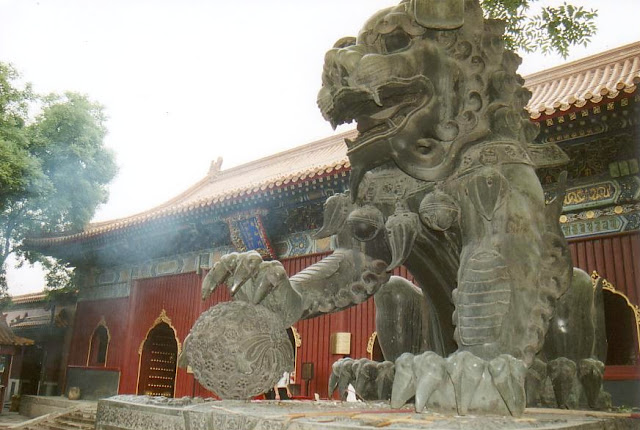 After Mount Tai, I continued performing my tourist duty and visited Beijing.  Pictured above is one of two iron lions guarding the entrance to the Lama Temple, the best maintained temple I saw in China that summer, and I saw many… 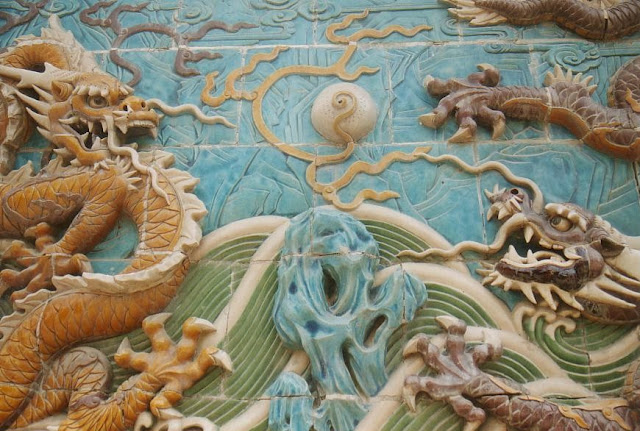 These are two of the dragons in the Nine Dragon Screen located in Beihai Park of Beijing.  The surface of the screen is made of glazed tiles – just in case you were wondering. 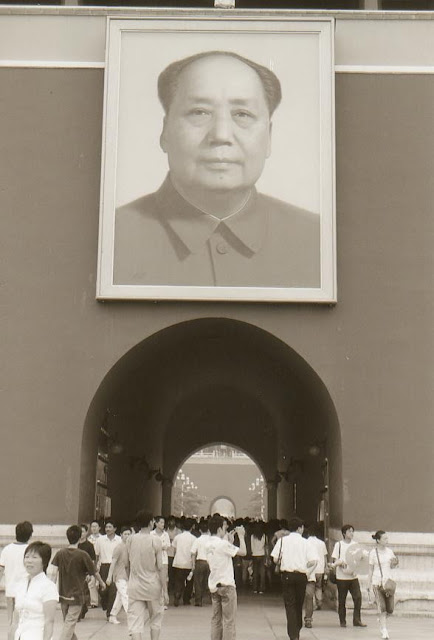 The Gate of Heavenly Peace complete with a portrait of Mao Zedong.  This was the only place I visited where I had to undergo any sort of security screening. 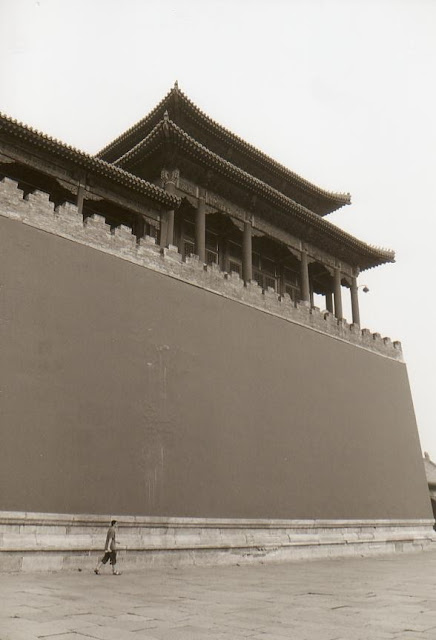 Due to renovation work in preparation for the upcoming summer Olympics in Beijing, much of the Forbidden Palace was covered in ugly scaffolding.  But, here is a portion of one of the outer walls sans scaffolding.

This is the Tiananmen Square.  Unlike 1989, the only thing active now are the tourist dollars...

Along with the Forbidden Palace, Tiananmen Square, and the Temple of Heaven, I wouldn’t have been a good tourist if I didn’t visit the Great Wall, and here it is. 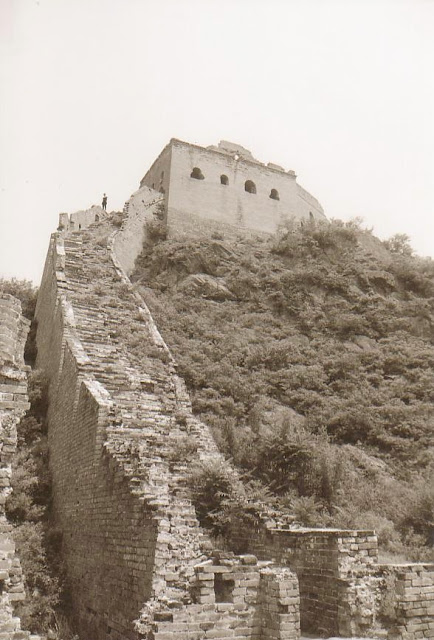 I spent an afternoon hiking about 10 km of the Wall – a crumbling, authentic portion of the original Wall as you can see.  If I tried I could imagine messengers scurrying along this raised road, or armies marching to defend a besieged point along its length.  I also had to imagine its end as no matter how far in either direction I could see in the distance, all it did was wind through the hills and mountains without stop. Certainly impressive.

After Beijing’s 13 million people, I traveled to Inner Mongolia’s essentially uninhabited grasslands and camped.  For a couple days this was my and my tent’s view.  The peace and quiet was a nice contrast. 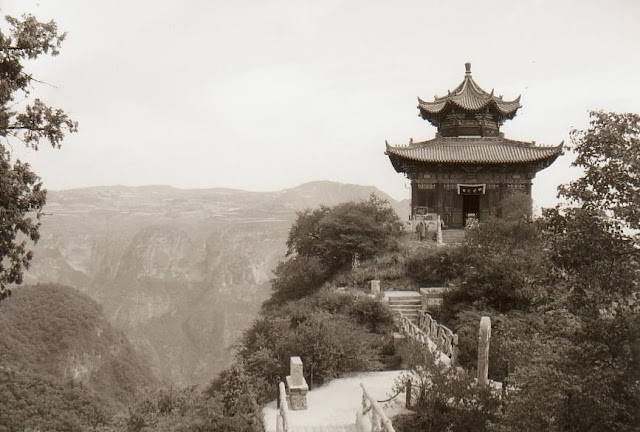 After the grasslands, I traveled through Ningxia Province, staying for a couple days, before continuing through the dry plains of Gansu province to Mount Kongtong, pictured above.  Sitting inside this little side temple is a massive, multi-armed Buddhist deity maintained by a wrinkled and kind female monk (nun? monkette? monkess?).  Scattered around the remainder of the mountain were numerous other temples and monasteries. 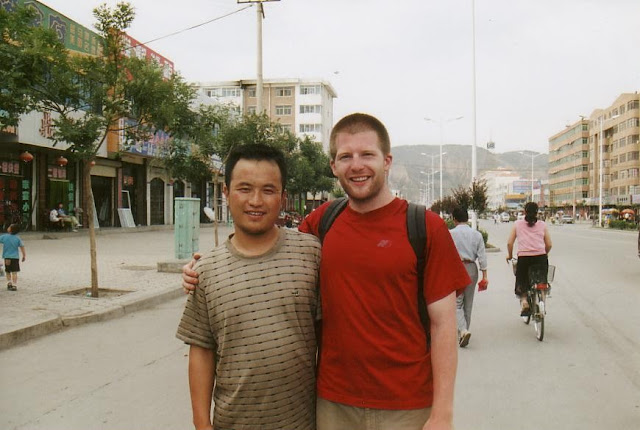 A friend I made – or I should say, found me – in the small city of Pingliang near Mount Kongtong.  He showed me great kindness before I continued on to the city of Xi’an. 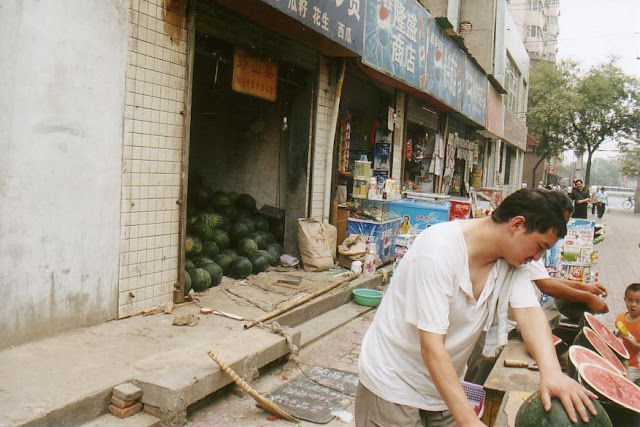 A melon seller and his storehouse on the streets of Xi’an.  For one Chinese dollar you could walk away with the fattest slice of watermelon that dripped streams of juice as you buried your face in it. 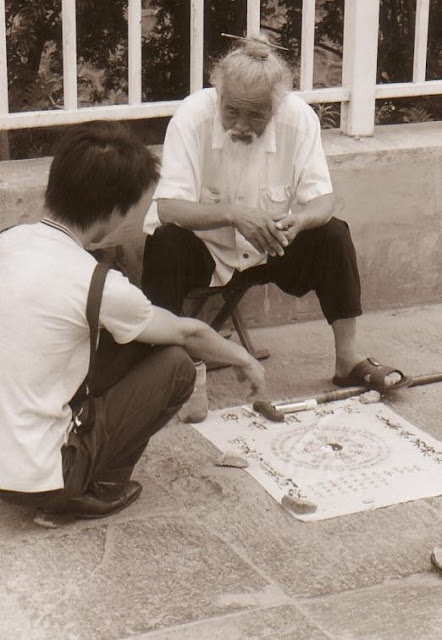 A fortune teller on the streets of Xi’an. 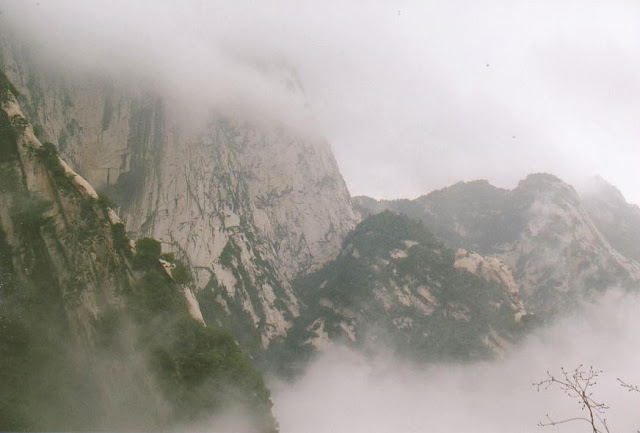 Near the city of Xi’an is Mount Hua, another of China’s great mountains that is seemingly always shrouded in fog.  Also near Xi’an is the Terracotta Warriors, but I neglected my tourist duty and did not visit them.  The fashion in which tourists – domestic and foreign – are funneled through China’s world famous attractions had begun to take its toll.  The idea of climbing a mountain was more appealing.