At long last, here are some photos from China. I should probably explain the general lack thereof until now and why it is likely to continue after these few.

Relative to the US, I don’t earn a lot of money in China, and so as I try to pay off school loans with a Chinese dollar that is currently worth 12 cents, it is difficult to save money while spending thirty Chinese dollars to have a roll of film developed. A crazy girl once told me that delayed gratification is better than temporary satisfaction. So, taking this as good advice, I have decided to wait until I return to the US to have my film developed at my friendly local Wal*mart. (“Where all your dreams can come true, particularly those involving NASCAR, redneck gangsta’ wear, and fake deer lure.”)  On to the post (Photos related to this post can be found here.)

A couple weekends ago I went to the city of Shanghai to have a reunion of sorts with one of my housemates from Australia, a Chinese man named Li Shenghong. He had just purchased a spiffy new digital camera and insisted we use it rather than my archaic machine. “It is better.” he said, and as I was his guest, I agreed. As you all are aware, the most popular tactic of East Asian photography is to include a person standing in front of the true object of the photo.  This is a practice I usually disagree with; the inclusion of my ugly mug in a photo can do nothing to improve it. My students explain the phenomenon by saying: “What if someone doubts you were there? You can show them the picture with you in it.” Murderers and rapists are low forms of society, but the person who cuts photos from National Geographic and claims they were taken during their vacation will surely have a special cell in hell.
Home to a mere 13 million, Shanghai is without a doubt the craziest place I’ve ever been. Too many people. This poor country boy just wasn’t meant to be used as an anchor as the subway slows to a stop, and then a stepping-stone as the doors open. His idea of personal space extends beyond an iron maiden of elbows and knees pressed against every part of his body below his shoulders. It was crazy, people everywhere, too many for words. As I waited for my departure train in one of the several giant waiting rooms at the Shanghai station, there were literally thousands upon thousands of people milling around me, a sea of black hair, cigarette smoke, chicken squawks, burlap sacks, shouts into mobile phones, trash piling up before the eyes, advertisements flashing - in short, a Chinese anthill.
However, amongst this­ strange mode of life, I was able to enjoy my time with Shenghong. We ate and ate, walked in the rain, went to a “temple” area, a museum, and ate some more. He took photos, I took photos, he took photos of me, I smiled, and all went well. In fact, he treated me like a king, paying for everything, not even allowing me to by souvenirs. As a result of all this, those of you who have complained in the past of there being a suspicious lack of me in the photos I send, you will no longer have anything to say because of Li Shenghong. Enjoy.


Shanghai is one of the world's unique cities, if not for its population alone.  Portions of the city occupied by the British, French, Japanese and a variety of other cultures during the 19th and 20th centuries, the streets and buildings at times seem anachronistic compared to many of the back streets which might be anywhere in China.  The following photos, while only of a 24 hour period, are nonetheless a peek into life into the Pearl of the Orient. 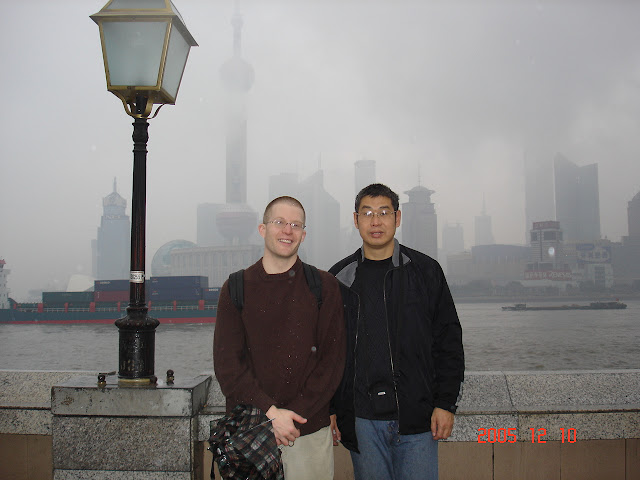 My host was a friend I had met in Australia, and a few months after arrival in China, we held a reunion.  Standing on the Bund, the CBD stands tall behind us, cargo ships plying the Huangpu, between.  Taken in 2005, the Jingmao tower is yet a force to be reckoned with. 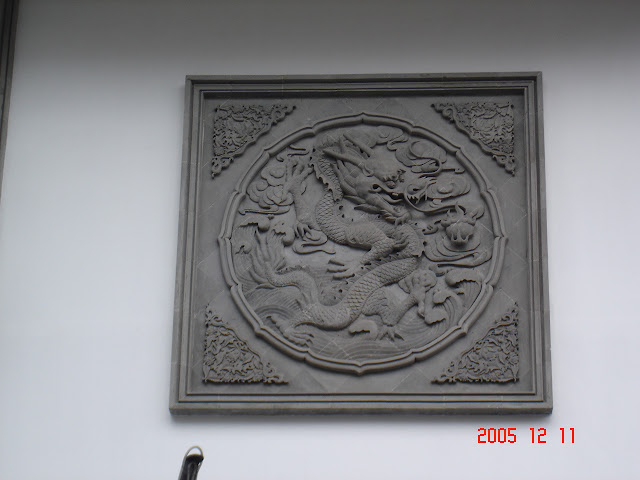 This is a awesome stone dragon, which, in contrast to the evil, fire breathing winged reptiles who want nothing more than to steal your gold, is an auspicious sign in China, something more like Puff the Magic Dragon. 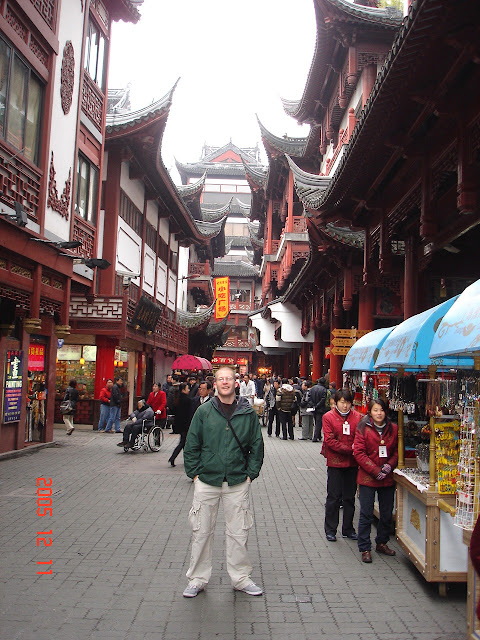 Traipsing the city with a Chinese person, yours truly appeared in most of the photos.  This is a place that translates to “Temple in the City”.  A better name would be “Souvenir Shops Occupying Historically Significant Buildings Begging for Your Money”.  Here it is early in the morning, so the throng is not quite up to full strength yet. 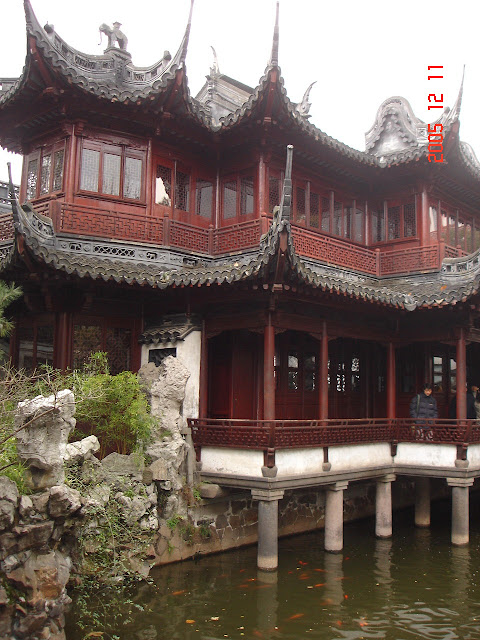 Near the “Temple in the City” is this place called Yuyuan Garden, which is actually the former estate of a really, really, really rich guy.  No Chinese garden is complete without coy fis. It's law. 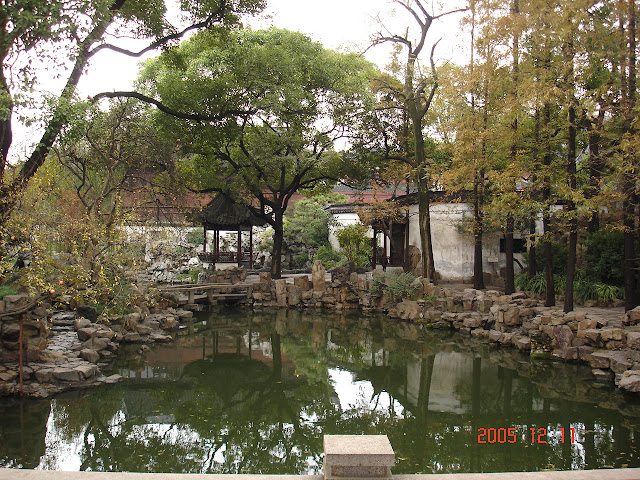 My friend was so struck by the tranquility of this spot in the estate he deemed the photo worthy of being person-less. 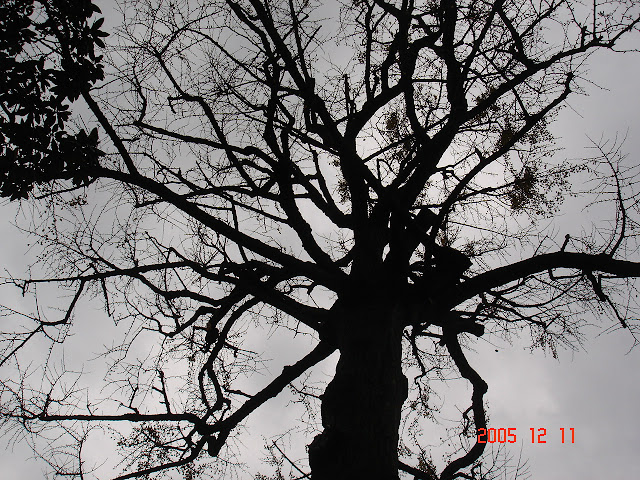 A moment I was able to steal the camera... 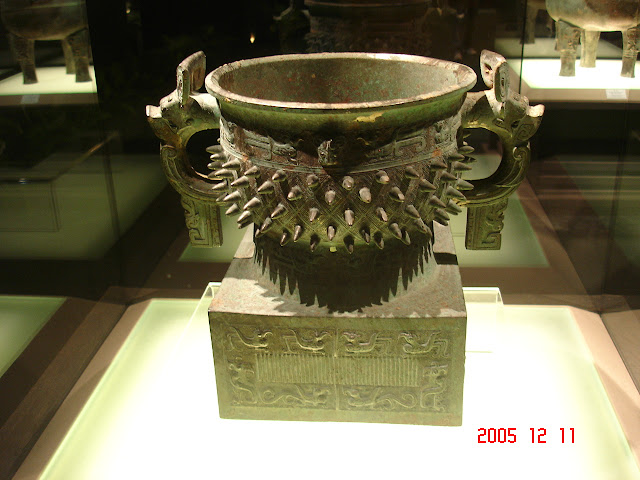 The Shanghai museum is world class.  If memory serves, this is an ancient wine vessel made of bronze.  Woe to the drunkard who has consumed too much or not spent enough time at the gym.  Me, I’m looking for a straw. 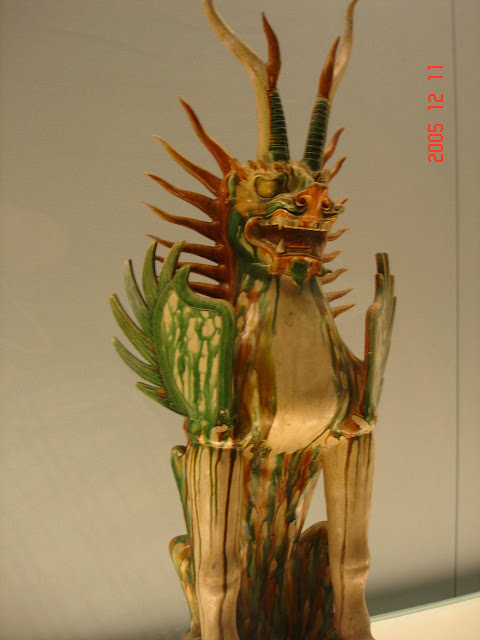 In Chinese mythology this is one of the guardians of heaven - or what is loosely translated as “heaven” in a culture that thankfully does not have such crazy ideas.  I’ve never seen any pictures of the soon-to-be-if-not-already mythological Christian gate-keeper, Saint Peter, but something tells me he doesn’t have the same ability to put the fear of god into you (pun intended) as this creature does. If you want to see what it looks like while guarding heaven, somehow highlight the photo so you’re seeing the color negative (impossible with blogger at the moment, but in Paint or Word it is.).  Be careful though, some of you may have nightmares.
24 hours was not a lot of time, so there are not a lot of photos...
Posted by Jesse at 9:55 AM