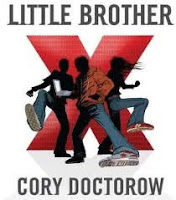 I’m willing to bear with a writer when their style is less than polished if they have – or seem to have – good ideas.  I’m willing to set aside wooden characterization if it serves a larger purpose.  I’ll accept a little glossing over if the intentions are good.   I’m even willing to ignore large holes in ideology if the story is good.  Unfortunately for Little Brother, the combination is too heavy.  With all of these issues  glaringly apparent, the novel is nothing more than inconsistent, juvenile fiction which complains about society’s problems in conspiracy theory fashion rather than offering imaginative, plausible solutions.  When raising the red flag, it’s best to have your ideas formed before making the effort.
Little Brother is the story of the highschooler Cory Doc—I mean, Marcus Yallow—and his super-ideological, super technical battle with the Department of Homeland Security (Jefferson and Washington applauding on the wings).  The story goes that in the wake of another major terrorist attack, this time in San Francisco, the US government passes what is essentially Patriot Act II.  As a result, the city is inundated with Orwellian security having the legal right to track and interrogate people as they see fit.  Our hero, literally quoting from the Constitution, sets about undermining their attempts at complete control through the creation of his own underground intranet, the Xnet.  So candy-sweet perfect it makes your teeth hurt, Yallow wages his ideological struggle while living a dual life: one half teenage Che Guevara, the other a mild mannered wonder boy who does no wrong and is super-intelligent beyond his 16 years.  And did I mention the girls which dig his anarchist ways?  There are more than one.  Yes, it seems Yallow can do no wrong and lives every juvenile fantasy as a result: women tearing their clothes off on one hand, homemade computer in the other.
All of this would be no bother if Doctorow weren’t at the same time trying to hammer home his version of freedom.  I emphasize his version as it seems he hasn’t quite settled on the details himself.  At one point in the novel he interprets the First Amendment as having limits, the example being that you cannot run into a crowded building and shout “Fire!” However, when closing in on the novel’s climax, our hero Corey – dammit! – Yallow stands up for his freedoms by convincing his loyal Xnetters to flash mob and play dead, which of course causes a similar situation to - you guessed it - shouting “Fire!” in a theater.  Panic ensues and the regal, stable society of Doctorow’s vision comes crashing down in one grand contradiction.  Sorry, the actions don’t match the words.  Game over.  Please, think again.
The second major ideological issue of the novel is Yallow’s relationship with his family.  All throughout we are shown how much they love and care for each other.  The support Yallow’s family gives him is unfailing throughout the problems that arise from his secret double life.  But again, as the novel nears its conclusion, an ugly contradiction raises its head.  At the drop of a hat, Yallow packs his things and leaves, abandons his family without a thought, and remains aloof of the harm that might befall them in the chaos he intends to unleash.  Now that’s consistent love for the family!!
In the end, this book should be labeled “YA.”  The manner in which Doctorow sets about educating the reader with regards to web infrastructure, coding, and cryptology are like a parent to child.  There is no subtlety.  Secondly, the self-aggrandizing manner in which the main character is so obviously a teenage fantasy of the author’s visions of himself in high school – too cool for the others – is stomach turning.  (After all, what high school boy wouldn’t want to lose his virginity, win a techno war with the government via his XBox, as well as see his vision of a perfect society emplaced?)  Sorry, but deconstructing an inflicted system with contradictory ideologies without a solution to clean up the mess only makes the problem worse.  Fighting chaos with chaos only gains you more… you guessed it, chaos.  Doctorow’s over-handed proselytizing of this point is just too much for me to recommend this book.  If that isn’t enough, the implausible manner in which our hero escapes in the climax… But I desist.  Little Brother is techno-anarchy for juveniles.  If you want a good book, read the Big Brother.
Posted by Jesse at 10:52 AM