Mexico was abso-f%$@#ing-lutely awesome.  The food, the friendly people, the colors, the beaches, the mountains, the music, the deserts – everything was great.  The only problems we had were caused by ourselves, nary a mote of malevolence directed our way.  But I’ll save my ramblings for the photos. 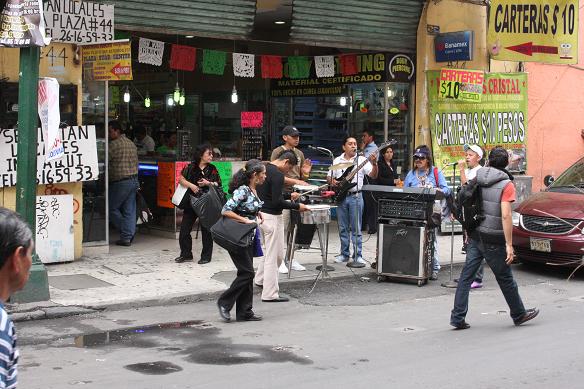 Mexico City is huge.  There is no way to take a photo encompassing the whole thing.  So, this is just a little sample of one of its streets.  Our first day in Mexico, this was to be a sign of things to come.  Music is everywhere.  It’s being played by troubadours wielding out-of-tune guitars on intercity buses, being blasted from backpack speakers (yes, backpack speakers) on the metro, and, like this photo, being played, live on many streets.  These guys certainly beat the homeless bucket bangers I’ve seen in Boston. 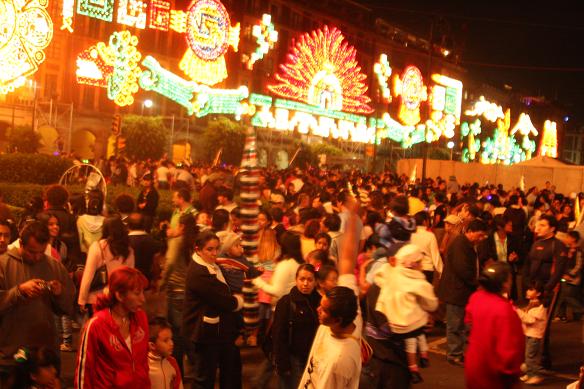 It was our luck to be in Mexico as it prepared for and celebrated its 200 year anniversary.  You are not looking at a photo of the anniversary celebrations, rather a night more than a week prior.  Every night thousands of people crowded the city’s main plaza, walking aimlessly and enjoying the vibe for no other reason than to be happy and among people.  The surrounding buildings, including the presidential palace were lit up, well, like the fourth of July, except that September 16th is Mexican Independence Day. 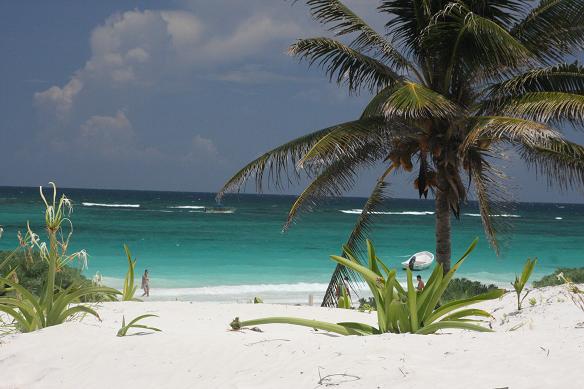 We spent only a short time in Mexico City, knowing we’d travel through it a few more times throughout the course of our holiday.  After a two days we headed straight to the beach in Tulum for a honeymoon proper.  This photo is not a postcard, rather our home for six days.  (The reef in the background was great snorkeling.) 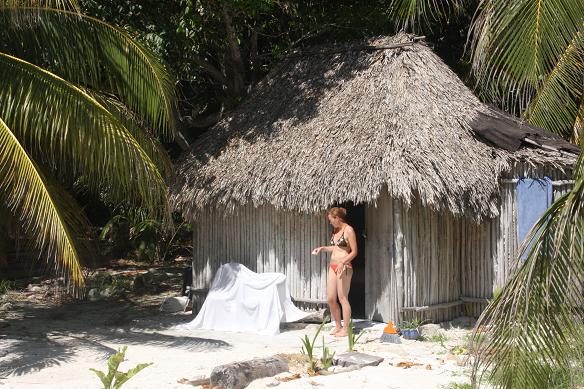 For six days we called this home.  So did a rather large iguana.  But he – or she - proved to be affable enough and let us have the bed. 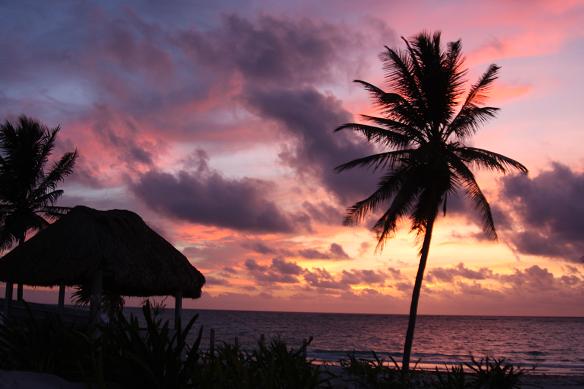 Tulum was truly the stuff of dreams! 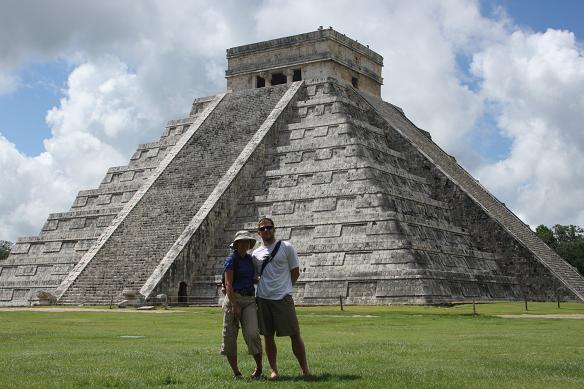 After Tulum we spent several days visiting Mayan ruins.  Above is Chichen Itza.  (Yes, this is a shameless, gratuitous tourist photo.)  It’s as cool in person as it looks here. 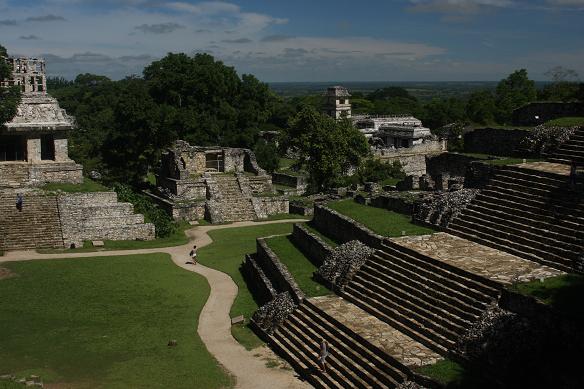 But not a cool as the ruins at Palenque.  Though we tried, no photos can do this site justice.  The jungle setting mixed with the anachronistic visage of exotic temples was amazing. 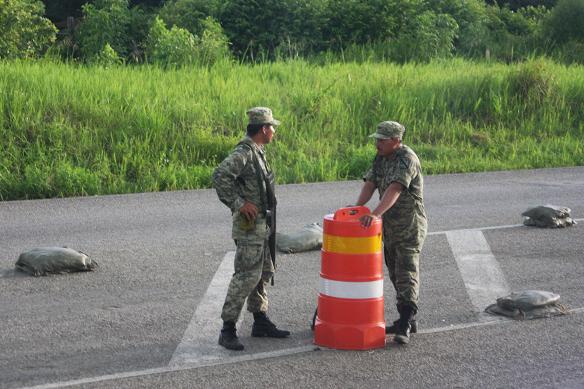 The number of visible weapons in Mexico is deserving of mention.  I cannot count the number of machine guns, let alone pistols and shotguns I saw in Mexico.  But all of them were held by policemen, policemen who proved to be most helpful despite the menacing artillery they carried.  In the US I would never think about asking a policeman carrying an M-16 where such-and-such a street is, but in Mexico it was no problem.  A smile, some quick directions, and they’d happily send you on your way, the mankiller at their side a non-issue.  It wasn’t only policemen either, ordinary security guards often carried uzis or old-school revolvers as well.  It was crazy! 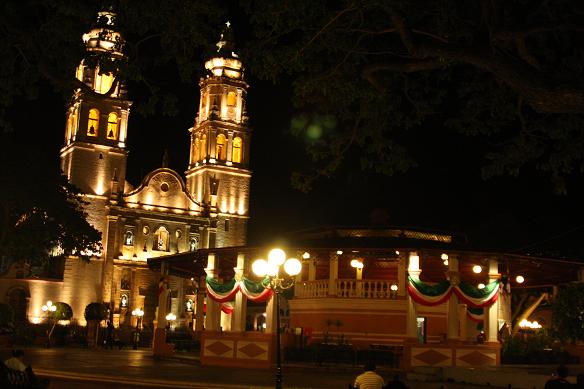 I suppose I can’t get too far without mentioning the incredible number of churches in Mexico.  Every big city and every little village had one.  Sometimes the church was the only thing in the village.  Here is the cathedral in Campeche, a modest building compared to those in Puebla, Mexico City or Oaxaca.  The red, white, and… green bunting decorates the gazebo in preparation for the bicentennial celebration. 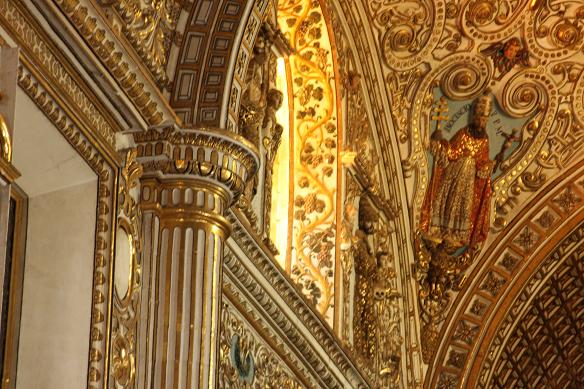 This is a photo of the interior of the cathedral in Oaxaca.  Everything was gilded in gold, the ceiling to the lintels.  I’m not so supportive of the church’s less-than-benevolent usage of funds – ahem, donations (What would Mother Theresa think?!?!?), but I have to admit the aesthetics are nice.
End of Part I
(For Part II, click here, and for Part III, click here.)
Posted by Jesse at 2:42 PM